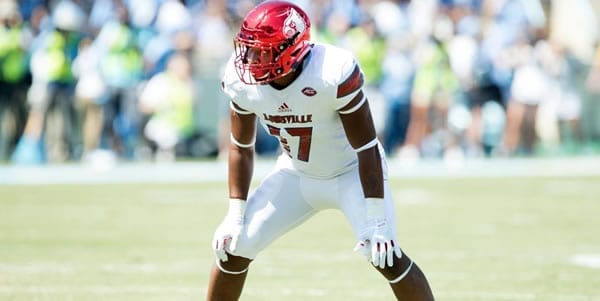 In the only Monday night college football game of the regular season, Louisville hosts Notre Dame for a rare clash at Papa John’s Cardinal Stadium. This meeting will be just the second all-time between the teams with Louisville having won their lone previous matchup 31-28 back in 2014.

After an undefeated regular season, Notre Dame made their first-ever appearance in the BCS Playoffs but was eventually defeated by Clemson 30-3 in their semifinal, Cotton Bowl matchup. The Irish were able to stay competitive in the game until an unfortunate injury knocked Julian Love out of the contest and from that point on the Tigers were able to pick apart the ND secondary for multiple long-distance touchdowns. Despite the defeat Notre Dame fans have to be happy with how they played over the past two seasons, putting up a 22-4 record with their only losses coming against top 20 opponents.

The Irish return seven starters on offense, but have big shoes to fill with Dexter Williams, Myles Boykin and Alize Mack all having moved on to the professional level. Thankfully they do return quarterback Ian Book, who last season posted a 9-1 record as a starter with his only loss coming against eventual National Champion Clemson. Book averaged over 300 passing yards per game with a 19-7 TD/INT ratio and an additional four rushing touchdowns on the ground. He will undoubtedly benefit from an offensive line that returns four starters, which will also help a Notre Dame backfield as they look to replace their focal point in Williams.

SKILL POSITION ROUND UP

On the ground, the Irish will rely on a dual-headed attack consisting of sophomore Jafar Armstrong and junior Tony Jones. Both combined to score ten touchdowns in 2018 and should get ample chances to make a name for themselves this season. Rounding out the offense are leading wide receivers, Chris Finke and Chase Claypool. Book will be looking for them early and often, as some of his targets have already been lost to injury including expected starter at tight end Cole Kmet along with backup wide receiver Michael Young. Over half of Book’s completions last season went to players that are no longer on the team, so there are ample targets and touchdowns out there for both Finke and Claypool to take advantage of.

Notre Dame lost some key components from last years’ defense to the NFL, with Jerry Tillery, Julian Love, Drue Tranquill, and Te’Von Coney all having moved on. The heavy losses don’t necessarily bode well from the Irish season, as since 2003 they have lost five or more players to the NFL Draft seven times and their combined record in the following years is just 35-39. All hope is certainly not lost as they have plenty of talent to go around, including a defensive backfield that returns three senior starters (Alohi Gilman, Jalen Elliot, and Tony Pride). Upfront, they are highlighted by Julian Okwara and Khalid Kareem while senior linebacker Asmar Bilel will man the middle. They will look to get their year off to a strong start with a Louisville offense awaiting them that finished last season ranked 122nd in scoring and 109th in yards per game.

Find: The Biggest Sportsbook Bonuses offered for this football season!

Last season was nothing short of terrible for Louisville, losing their previous nine games in a row and finishing with a 2-10 record, their worst since 1997. This was a significant fall off the cliff for the Cardinals after going 71-33 from 2012-2017 and ending every year in that time span with at least eight wins. Thankfully scumbag head coach Bobby Petrino was finally let go with two games left last season, and their fans will be hoping that new coach Scott Satterfield can bring some of the success he had over the previous fives seasons at Appalachian State to Louisville.

The Cardinals offense took a big hit when former Heisman Trophy winner Lamar Jackson moved on to the NFL, but that still doesn’t excuse how low the team sunk in 2018. No running back had over 500 yards, no receiver with more than 550 and the quarterback position combined to throw ten touchdowns compared to fifteen interceptions, which was one of the reasons they ended up finishing the year ranked 125th in turnover ratio. This season they will look to junior quarterback Jawon Pass to lead the way, and he will be hoping to build a connection with leading wide receiver Dez Fitzpatrick, who is the only returning player to end 2018 with more than 25 receptions or 2 touchdowns. Sophomore running back Hassan Hall is supposed to be the lead back for the Cardinals, and he may find the going tough with an offensive line in front of him that returns just two starters. It doesn’t look like Louisville will be breaking their 1000-yard streak anytime soon, with Bilal Powell in 2010 that last to clear the total.

Ten starters return for the Louisville defense and all eleven of their starters are either senior or juniors. Unfortunately, these are also the same players that saw their team finish 2018 ranked 128th in scoring, 127th against the run and 122nd in total yards allowed per game. The linebackers are the expected strength, highlighted by juniors CJ Avery and Dorian Etheridge. The defensive backfield returns three starters from a unit that helped them rank 40th in passing last season, though that was mostly because teams were usually killing Louisville by halftime and ran the ball a decided amount in the third and fourth quarters. The Cardinals defense has allowed 46 points per game over the last 19 contests, so there is plenty of room for improvement.

If you are a fan of against the spread trends, there isn’t much out there to support either team. While Louisville is 0-6 in their last six games as a double-digit underdog, Notre Dame is 2-7-1 in their last ten as a double-digit favorite. As a home dog, the Cardinals are 3-8 in their previous eleven. On the other side of the spectrum, the Irish are 9-15-1 in their last 25 games as a road favorite. Notre Dame is also 2-7-1 in their previous ten games against unranked teams while Louisville has been especially terrible against ranked opponents, going 0-7 in their last seven and not covering by a whopping total amount of 117 points, an average of over 16 points per game. Even with the heavy personnel losses to both graduation and injury to the offense, I still expect Notre Dame quarterback Ian Book to continue his efficient ways against an experienced but still unimpressively lacking Cardinals defense. A new head coach for Louisville should have the team fired up and ready to go at kickoff, but after about five minutes that may not matter anymore as Notre Dame has significantly more talent on the other side of the field, and I believe by games end that will end up being too much for the Cardinals and their home crowd to deal with. Despite the near three touchdown head start, I’ll be going against Louisville and backing the Irish to get the road win and cover to start their 2019 season.