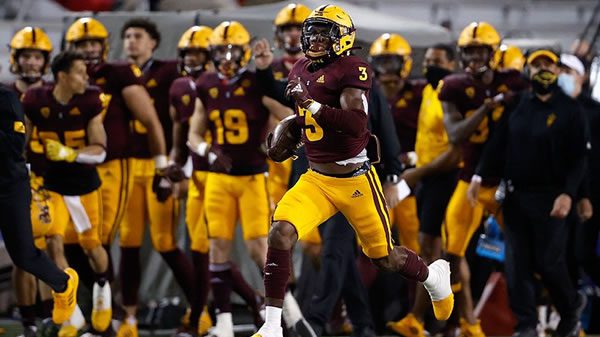 Stanford has given itself a chance at representing the Pac-12 North in the conference championship game, but the Cardinal have a long way to go before they can hope to play in the Rose Bowl. The Cardinal have to survive a two-game trip to Arizona State and Washington State, and even if they do that, that would still leave them looking up at Oregon State unless the Beavers slip up somewhere.

Arizona State, on the other hand, is in the driver’s seat in the South. The Sun Devils already have a win over UCLA under their belts, and if they can get a victory here, their road map to the Pac-12 title game will be laid out perfectly. This game is sandwiched between the Bruins and Utah, so there’s a worry that the Sun Devils could stub their toes here and throw the South into chaos. That’s especially true given that the Cardinal has been a thorn in the Sun Devils’ sides whenever the teams have met, as Stanford has won six of the past seven meetings. But ASU did win this game in 2014 in Sun Devil Stadium, and the Cardinal might still have their minds on how they upset Oregon when they kick off in Tempe. How the Public is Betting the Stanford/Arizona State Game

Nothing says that you have to go deep to be an effective passer, and Tanner McKee has shown that through five games this season. After throwing just seven passes in 2020, McKee has gotten off to a fine start in 2021, tossing 11 touchdowns and no interceptions and getting better every week. Against Oregon, he ended up tossing for three scores and nickel and dimed the Ducks downfield, as none of his completions went for longer than 25 yards. McKee tends to split his completions between two receivers, as Elijah Higgins leads in receptions and yards while Brycen Tremayne has the edge in touchdowns. Stanford also has solid safety valves in third wideout John Humphreys and tight end Benjamin Yurosek, giving McKee a lot of choices. The running game isn’t bad either, as Nathaniel Peat averages 6.5 yards per carry on the season. There’s a lot to like about this offense as a whole, as they won’t try to do too much. They’re perfectly happy to take what’s available to them.

When Arizona State Has the Ball

Jayden Daniels has to get more substance out of his performances, as he hasn’t shown the greatest touchdown to interception ratio to date in 2021. For the year, Daniels has just four touchdowns against three interceptions, and while his completion numbers are strong, he isn’t really getting much out of his passing yards.

Like scoring? You’ve come to the wrong place, as the under has cashed in four straight meetings in this series. Points have really been at a premium in Tempe, as the past six meetings in the desert have seen at least one team held to 17 points or less. Only one of those six matchups topped the total in this one, so you’ve got to be prepared for only one team to do the lion’s share of the scoring in this game. Working in Stanford’s favor is the fact that the road team has covered three straight in this series, with the visitor winning the game outright in three of the past four matchups. Something has to give as far as covering the number goes, as both teams have been cover machines in conference play. Stanford has covered in five of its past seven in the Pac-12 with one push, while Arizona State has four straight covers in league play. But the Sun Devils are at their worst when expected to succeed: they’ve covered in just one of their past nine as a home favorite.

Cloud cover will be welcome during the day, but by night, temperatures should cool to something more bearable. Temperatures will settle into the mid-60s with winds at six miles per hour.

I’m not sold on Stanford here. I think the Cardinal is still going to be thinking about the win over Oregon and will not have its mind right to take on Arizona State here. The Sun Devils have been waiting for this game, and they shouldn’t have a lot of trouble running over Stanford’s weak ground defense. Give me Arizona State.