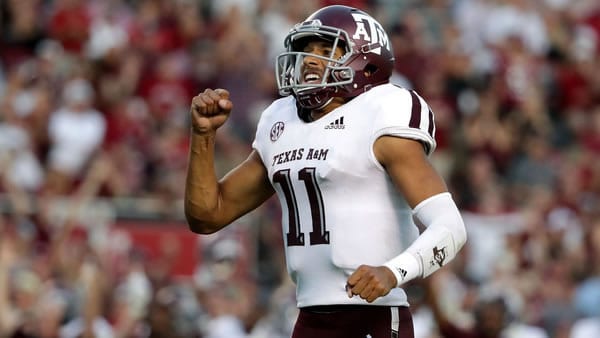 Two teams that are trending in different directions meet when Texas A&M visits Knoxville for the first time ever for an SEC cross-divisional bout with Tennessee Saturday afternoon. The Aggies ride a four-game winning streak into this one, while the Volunteers are yoked with a four-game losing skid. How are we playing this game with our free NCAA football pick?

College football betting odds opened Texas A&M at around -13 over Tennessee, with an over/under of 53.5. But then came word out of Aggies camp of some positive virus tests. That line then dropped five points, to -8, and that total dipped to 51.

As of Tuesday, this game was still a go, but that could change.

The Aggies ride a four-game winning streak into Saturday after slapping South Carolina last week 48-3. Texas A&M, giving 9.5 points on the road in Columbia, led 21-0 at the half and 41-0 in the fourth quarter before allowing the Gamecocks a pity field goal with six minutes left, on its way toward victory and the cover.

The Aggies have now out-gained four of their six opponents this season and out-rushed five of their six foes.

Six weeks ago, Texas A&M lost, badly, to Alabama, which is now the No. 1 team in the country. But since then, the Aggies own wins over Florida, Mississippi State, Arkansas, and South Carolina, going 3-1 ATS along the way.

At 5-1 in conference play, Texas A&M sits in second place in the SEC West, a game and a tie-breaker behind the first-place Crimson Tide.

Tennessee, meanwhile, after starting 2-0 this season, lugs a four-game losing slump into Saturday, after falling at Arkansas last week 24-13. The Vols, giving two points on the road in Fayetteville, actually led that game 13-0 at the half. But they then gave up back-to-back-to-back touchdowns on the Razorbacks’ first three possessions of the second half and came up empty themselves from there, on their way toward defeat.

The Volunteers out-played Arkansas for a half last week, but six second-half offensive possessions resulted in four punts and two interceptions. For the day, Tennessee got out-gained by the Hogs 413-292 and lost the turnover battle 2-0.

The Vols have now been out-gained and out-rushed each of their last four games.

Tennessee opened this season with wins over South Carolina and Missouri. But since then, they own losses to Georgia, Kentucky, Alabama, and Arkansas, going 0-4 ATS in the process.

At 2-4 overall, the Volunteers are scrambling for enough wins to make a bowl.

Vols starting quarterback Jarrett Guarantano left last week’s game with a head injury, and his status for this game is uncertain.

These teams have played three common opponents so far this season; Texas A&M owns wins over South Carolina and Arkansas and a loss to Alabama, while Tennessee owns a win over the Gamecocks and losses to the Razorbacks and Tide.

These programs have only met three times all-time, twice in bowls. Most recently, in their only meeting as SEC rivals back in 2016, A&M beat Tennessee in College Station in overtime 45-38.

Totals are split 3-3 in Aggies games this season, which are averaging 58 total points against an average over/under of 55.

Unders are 4-2 in Volunteers games this season, which are averaging 52 points against an average O/U of 51.

Texas A&M is hot. Tennessee is not. The Aggies also own the better quarterback situation and hold better performances against common opponents. However, in sizing up the rosters, we believe these teams are closer than records, and recent performances might indicate. We also remember last season, when the Volunteers started 1-4, then won seven of their previous eight. If they can just get their running game going and play some defense, Tennessee can keep this one close. We’ll take Vols and the points here. Bet this game and ALL your sports wagers at -105 odds instead of -105! Making the switch to reduced juice will save you LOADS of cash! Find this great offer as well as 20 point teasers, 25 team parlays and the most props anywhere —> BetAnySports!