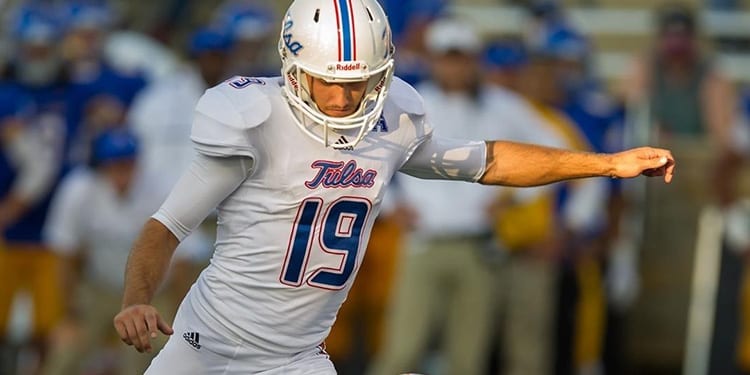 The American Athletic Conference steps into the Thursday Night spotlight this week with a showdown between the Tulsa Golden Hurricane and the Temple Owls at Lincoln Financial Field. Last week the Owls scored their first victory of the season in upset fashion with a 35-14 shocker over Maryland. Sportsbooks closed the Owls at 15 point underdogs to a Maryland team that was 2-0 with a victory over a top 25 opponent. However, the Owls delivered a surprising yet fulfilling complete performance as they dominated on both sides of the football. This week Temple looks to build on last week’s success when they make a homestand as 7 point favorites against Tulsa.

From a season standpoint, the Golden Hurricane holds a 1-2 SU and 1-2 ATS mark just like Temple. The Golden Hurricane scored a win in their opener against Central Arkansas but have dropped the last two against Texas and Arkansas State. Still regardless of the recent disappointments, Tulsa enters this Thursday’s game with a shot to turn things around. From a pure talent standpoint, these two teams are pretty equal. Tulsa has the edge in experience. Neither has a great advantage on offense, and Temple holds the edge on defense. Therefore there is a good opportunity for the Golden Hurricane to get back into the W column if they can come up with some plays on offense and protect the football.

See all Sportsbooks Teasers
Reasons to take the points

I mentioned that I believe both of these teams are pretty similar from a talent standpoint. However as everybody knows, the devil is in the details or in sports betting terms, the matchups. From a matchup standpoint, I like the Golden Hurricane in this game. For me, this game comes down to the play of the offenses. Both defenses are pretty decent and will get their share of stops. However, both Tulsa and Temple’s offenses have struggled this season with turnover ridden quarterback play. The offense that creates the most scoring opportunities will likely put their defense in advantageous position to take advantage of the opponent’s turnover/offensive woes.

Neither one of these teams are designed to play from behind but I think Tulsa is the best team for this matchup with Temple. The Owls are more of a straight forward team. The Owls run a pro style offense that I would label as very “vanilla.” I think the play calling is often poor and their plays are often predictable. Meanwhile, Tulsa mixes things up with option reads between QB Luke Skipper and tailback Shamari Brooks. The Golden Hurricane offense also uses some RPOs to help aid the passing game. Honestly neither of these offenses have the type of standout players that you would want to put your money on. However, Tulsa’s offensive style is better prepared to attack this stiff Temple defense.

I am not the biggest believer in trends but sometimes they are worth following. A couple of convincing trends in this game surround the home/away splits for both Temple and Tulsa. The Owls have dropped their first 2 home games this season as favorites and are just 1-4 ATS in their last 5 home games. Meanwhile, the Golden Hurricane has amassed a 15-5-1 ATS mark in their last 21 games on the road. Also if you look back over Philip Montgomery’s tenure in Tulsa, the Golden Hurricane usually plays well in these nationally televised contests. They seem to always step up when there is a bigger audience and this will be a great opportunity to get this program heading in the right direction after a dismal 2017 campaign. Remember this Tulsa team won 10 games in 2016. Coach Montgomery was on the hot seat going into the season and another disappointing loss to Temple this week could start ringing the fire alarm. This is a much needed win for Tulsa and I think they will deliver!