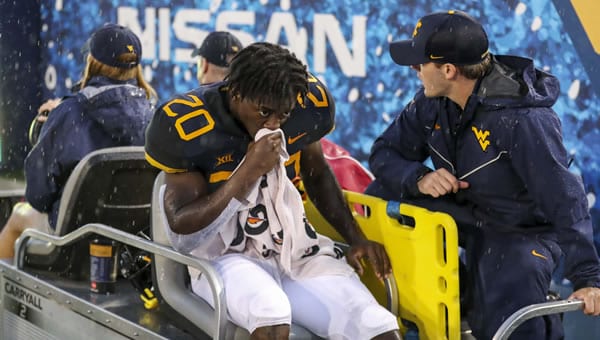 The Mountaineers come into this contest on a bye after summarily dispatching the Eastern Kentucky Colonels in their season-opener in Morgantown, two weeks ago. As a 43-point favorite, WVU covered the long swim back in a 56-10 victory.

The Cowboys step into this affair off what would have to be classed as a significant scare. As a 24-point favorite, the Pokes were forced to rally to fend off an upset bid by cross-state foe Tulsa in a 16-7 win in Stillwater, last Saturday.

How the Public is Betting the West Virginia-Oklahoma State Game

Presently, 61% of the consensus like the Mountaineers with the points. Despite the early public lean on the points, the line has not moved at the time this article was written (Tuesday morning). For Over/Under players, the posted number of 54.5 has already fallen by three points to reflect heavy action on the Under.

Oklahoma State has won the last five meetings between both parties. The most recent excursion to Morgantown proved to be a hard-fought one for the Pokes in 2019 when they edged out the Mountaineers in a 20-13 defensive battle. The resultant fostered a push on a closing line of -7 in favor of Oklahoma State.

Since West Virginia joined the Big 12 in 2012, the Cowboys have been a cash-cow in this series. Okie State has gone 4-0-1 ATS in the preceding five meetings between both parties and has gone 5-2-1 ATS over the lifespan of this series.

11 West Virginia players are eligible for reinstatement from suspension after being subjected to disciplinary action for one game due to an off-season off-the-field incident. The collection of offensive starters and reserve personnel associated with this mass suspension will undoubtedly be essential for the Mounties as they venture into what will be a much larger test than EKU, two weeks ago.

All of the elements would suggest that the Mountaineers are not only in a position to cover here but perhaps maybe even steal a win. WVU was untested against Eastern Kentucky, which allowed many reserve personnel to see some meaningful snaps, which only bolsters their roster situation and depth heading into this game. Moreover, West Virginia has an added week of preparation, practice, and rest for this game, so they will undoubtedly be the fresher and perhaps more adept of the two sides. Combining this with some key offensive players returning from suspension, this can only help matters. When we combine this with the fact that West Virginia is prone to be undervalued here by virtue of the losing streak against Oklahoma State combined with their inability to come in under the number in this series as of late, West Virginia can actually still be undervalued here despite having the tremendous upside, even with Oklahoma State not looking strong a week ago by virtue of the trends in this series alone. This causes me to take a hard look at the Mountaineers.

I will go out on a limb here, but I think West Virginia is not only going to cover but win this game. However, even if the Mountaineers do not win the game, I don’t seem them losing by a possession at worst. Why do I think Oklahoma State is in peril? Well, their offense could only generate 277 yards against Tulsa; this is not particularly comforting considering the Golden Hurricane is not a defensive stalwart, and OK State lives and dies by their offense. To further reinforce this premise, the Pokes only generated one touchdown, and their bell-cow running back, Chuba Hubbard, could not break the 100-yard mark. Against a West Virginia team that put together over 600 yards of total offense in their season-opener, Oklahoma State better get their act together, or this thing will not only be an upset but perhaps a rout orchestrated by the Mountaineers. Be that as it may, there are plenty of points on the table here to work with, so I would be more than taking them. FREE BET ALERT! Deposit $100 to $300 and get a dollar for dollar matching real cash bonus at one of the biggest sportsbooks on the web! —> MyBookie!