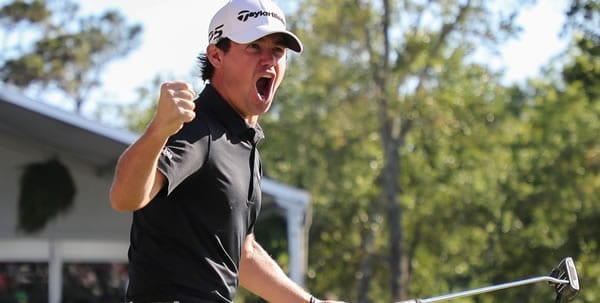 The new PGA schedule has things ready to wrap up in just over a month, so the Tour is in full sprint toward next week’s Open Championship and the FedExCup Playoffs. The young guns on Tour have taken full advantage in recent weeks with Nate Lashley and Matthew Wolff the latest to break through with career-changing victories. Gary Woodland winning his first Major and Tiger Woods re-emerging as a Major contender further show that 2019 has been a good-story season. The Deere has a good chance to follow that trend as there are very few established stars in the field. Most of the Euro set headed overseas prior to last week, and the Senior Players Championship has the attention of best veterans, leaving a very young and inexperienced group to contend for the Deere win. To highlight that point, Collin Morikawa (six career PGA starts) is the betting favorite at Bovada.lv, where he is listed at 16 to 1 to win. Viktor Hovland and Matthew Wolff are also expected to contend, and both are currently ahead of vets like Lucas Glover and Charles Howell III on the betting boards. Former Deere champ Zach Johnson is listed at 40 to 1 to win and represents some substantial value given how kind TPC Deere Run has been to previous winners. A seat on a charter flight to Royal Portrush is waiting for someone that isn’t already in the Open field, so this summer has at least one more good story to produce.

TPC Deere Run has a well-known history of producing some very low scores. Paul Goydos owns the single-round record after carding a 59 in 2010, but that wasn’t good enough to win as Steve Stricker set the then tournament record at 26-under to win his second Deere title. Michael Kim was able to hit 27-under en route to an eight-shot victory last season, marking the eighth time in the previous ten years where the winning total hit at least 20-under par. The 7,300-yard, par-71 course is a gorgeous trip through some of the best natural course design in the Midwest, but there is very little defense against the modern Tour players. Birdies will be had in bunches as there is no shortage of scoring chances, especially for those that are willing to be aggressive. It has been a wet spring, and early summer through Illinois as well so the course should be soft and receptive, further adding to already fast scoring pace.

Each week, we take a look at the online betting sites and highlight the best values on the board. We make some picks to win and breakdown a couple of head-to-head matches that can be found at just about any golf betting outlet. Odds to win and pairings come courtesy of the board at Bovada. Here are our picks to win the 2019 John Deere Classic.

The field strength makes betting this week somewhat of a Master Class, and it will lead to some strange looking picks. Harman doesn’t fit the mold as a favorite considering he has made the cut in just over half of his starts this season, but his recent trend is good with two top-10’s in his last three starts, including the score-fest at the 3M Open. He will see similar conditions this week and his light hitting ways are not a detriment at a course that does not play to the yardage on the card. His strength lies on the greens for the most part, where he is 34th in total putting, and he is one of the best lag putters on Tour, ranking 23rd in 3-putt avoidance. He won’t be giving anything back to the field on the greens, and that is a great thing in a fast-paced environment. He hits plenty of fairways and is also a solid overall player around the greens, entering the week 16th in sand saves. He has the experience edge over many in this field and passed the eye test last week with a couple of 65’s. That kind of performance again should have him around the leaders at some point this week.

Clark fits the Lashley/Wolff mold, and the 25-year-old seems only to be getting better during his first full year on Tour. The last three weeks have produced low scores, and Clark has gone 39-under over that span while improving his FedEx standing by nearly 30 spots. His T5 last week showed he is ready to be one of the premier power players on Tour behind the 4th best driving distance. His irons aren’t above average yet, but he leads the Tour in GIR putting, leading to the 8th best birdie rate and the 36th best scoring average. He has two dominant stats in a field that is short on dominant talent so he could pave the way to a win by just doing his own thing. Clark will be a multi-time winner on Tour as soon as his overall ball striking improves, but he is ready to notch that first PGA win in an event like this.

Hossler has failed to match his five top-10s and two runner-up finishes from 2018, but the 24-year old remains a talent on the rise. He survived a very tough Genesis to finish 15th there and has shown glimpses elsewhere without being able to put it together for four days. Beau fired a 65 and two rounds of 68 last week but also carded an “even par” round of 71 that eventually threw him back in the pack. That inconsistency has him appropriately in the longshot group, but he does have the ceiling to win on Tour. Like Clark above, Hossler is long off the tee at 33rd in driving distance and works well on the greens, entering with top-13 marks in strokes gained and total putting. I think the kid has plenty of gas in the tank to rise through this field and 80 to 1 would be a fantastic payday heading into the Open Championship.

Picks to win based on the predicted score for all four rounds. Check with MyBookie for single round matches and a variety of prop bets.

The betting boards are a little light on match-ups for the Deere so lets head to The Scottish Open for some big-name duels.

You should pop-up like a meerkat anytime you see a player like Fowler listed as such a big underdog. McIlroy looks dominant with Tour-best marks in overall tee-to-green and off-the-tee performance, but he hasn’t even played the Scottish Open much over the last five years, much less won there. Fowler won the 2015 Scottish Open and Gullane, and while this year’s event is at the Renaissance Club, Rickie’s links golf pedigree is among the best of the U.S. born players. Rory beats just about everyone when he is on his game, but he has had a few hiccups along the way, including a missed cut at the Memorial where he was a heavy favorite to contend. Fowler has some small statistical advantages on and around the greens over McIlroy, and those should play out over four rounds on a links course. The value with Fowler is just too good to pass on here, and I also like Matt Kuchar (+160) to win against McIlory. Kuch was the runner-up to Fowler in 2015, and his no-nonsense approach travels well.

Stenson has excellent value here but more importantly, he has been a solid player with seven top-25’s in twelve Tour starts while Thomas has missed two cuts in four events since returning from injury. Thomas looks to be searching for that pre-injury swing so it is a good time to bet against him and Stenson brings a built-in advantage on the greens. Thomas has the better scoring average between these players but not as much as you’d think considering Justin is 2nd on Tour in birdie average. Stenson is 162nd in birdies, but just 14 spots back of Thomas in scoring, meaning Henrik is the far more consistent player. That is in line with Stenson having the better scrambling ability and saving par in that links environment is essential. Thomas will be right sooner or later but let him prove it before getting your money on his side.