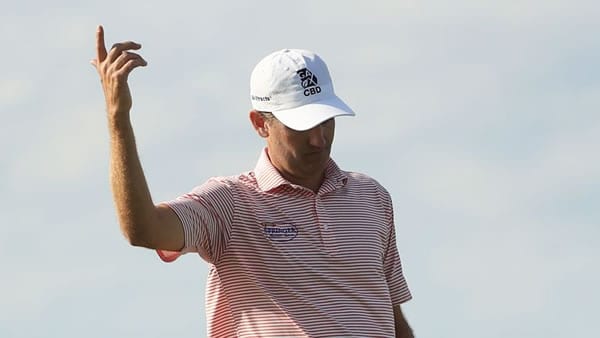 In a typical year, this part of the PGA fall schedule has players hopping worldwide, but the Coronavirus in keeping most Tour play in the US, and the CJ Cup will be held in Las Vegas this week. This event is relatively new to the Tour and has been contested in South Korea since 2017, but while the venue has changed for 2020, the Major-quality field has not. The top-60 from last season’s FedExCup earn automatic invites, and the rest of the 78 player field is rounded out with various high-level sponsor exemptions. Justin Thomas won in 2017 and 2019 and is one of the betting favorites alongside Dustin Johnson and Jon Rahm. Brooks Koepka is the 2018 champion and is also in the field, joining Rory McIlroy, Xander Schauffele, and Matthew Wolff as potential contenders.

Shadow Creek Golf Course will fill in for Nine Bridges as the host course, and this North Vegas layout is most famous for hosting the first Tiger v. Phil Match in 2018. The course is public, but it may as well be private considering the high-roller green fees, and it will play just short of 7,600 yards at par-72 for the championship. Many PGA pros reside in the Vegas area and have likely logged a round or two at Shadow Creek, but the challenge will be fresh for nearly everyone as the course has never been ramped up to Tour conditions. Even the Tiger-Phil match was tailored to make those two look good, and the course likely has plenty of difficulty that was not shown in that event. The greens here were not necessarily designed for elite-level events and are small by Tour standards as a result. The course did go through some advanced prep ahead of this week to speed up the conditions, especially on and around the greens, so how players handle the approaches and short game scenarios could be the deciding factor. The length of the course jumps off the page a bit but remember that Vegas is well above sea-level, and the altitude will have things playing quite a bit shorter in reality.

Each week, we take a look at the best sportsbooks and highlight the best values on the board. We make a short, middle, and long odds pick to win and breakdown a couple of the most popular head-to-head matches that you can find at just about every golf betting outlet. Odds to win and head-to-head pairings for this week can be found at Bovada (50% Bonus on your first deposit of $100 to $500!) Here are our picks to win the 2020 CJ Cup at Shadow Creek.

Consistency has to count for something, and Xander is consistency personified with just four missed cuts in the last two seasons combined. His last outing resulted in a T5 at the US Open and was 2nd at the Tour Championship to finish last season. He has moved to 8th in the OWGR and has been a routine contender with nine top-3 finishes since the start of 2019. The stat sheet is an embarrassment of riches with top-10 marks in both off-the-tee and tee-to-green performance with the 5th best scoring mark. He is top-20 on Tour in one-putts and ranked 2nd in scrambling last season. There simply are no specific holes in his game, and he has won the Tour Championship and WGC events to prove he is fit for these short but strong field events.

Finau is still stuck on one career PGA Tour win, but how much longer can that last considering he has sixteen top-10 finishes since the start of play in 2019, including a T8 at Winged Foot in his previous start. He ranks 13th in driving distance and will be able to shrink Shadow Creek and attack the course beyond what many others will be able to. He finished last season as the 11th best tee-to-green player, and as a top-25 putter on greens in regulation, Tony notched top-20 marks in both birdie and scoring averages. I have heard the arguments that all of his close calls mean he isn’t a closer, but I think he is way too talented to not breakthrough in a big way and ultimately win multiple events in short succession. I think he is one of the best talent-to-ROI plays in the field this week.

Todd was a two-time winner in the fall last year and kept things going after play resumed with four top-20 finishes in his previous five starts and a T23 at the US Open. He is one of the shortest drivers on Tour but ranked 4th in fairways hit, and the altitude is going to be his friend this week. Considering the small targets on these greens, playing from the fairway should be an advantage, and there are few that hit more than Brendon. He finished the year 4th in overall putting average, netting the 26th ranked scoring average and 3rd best scrambling rate. Todd is talented around the greens and has that veteran skill set to hang in just about any scoring environment. It is a bit unclear how Shadow Creek will play, but if the scoring pace is average or if patience is rewarded, a player like Todd becomes a very sneaky play.

Picks to win based on predicted scores after all four rounds. Check with your favorite online betting site for single round matches and a variety of prop bets.

A Spanish Showdown in this matchup, and the youngster Ancer looks to get another W against his fellow countryman after winning two of the last three head-to-head. Garcia broke out for a win at The Sanderson Farms Open, his first win on Tour since 2017, but it has been Ancer who has had the better long term trend, moving into the top-25 in the OWGR with Garcia back at 38th. The short term trend is also with Ancer as he made the Tour Championship and cruised into this field while Garcia missed the FedExCup Playoffs all together and needed an exemption just to make this field. Both players are proficient off-the-tee and above-average tee-to-green as well, but Ancer separates himself on the greens, ranking 41st in strokes gained-putting with Garcia back at 187th. Smaller greens can sometimes diminish a big putting advantage, but without a lot of course familiarity, I don’t think Garcia is going to be able to leverage any experience edge. Ancer is also the better scrambler of the two, so the floor is higher with him. Garcia needs to show some more consistency, and one win isn’t going to sway me, seeing him as a player to bet against at the moment.

Fowler may have gotten the best of this head-to-head at the US Open, but he missed the cut last week to continue a rather long term negative trend that has seen him fall to 41st in the world ranks after being as high as 7th in 2019. Rickie finished last season with more missed cuts than top-10 finishes for the first time in his career, and his average score per tournament is just 1.4 strokes under par since play resumed this summer. Since his US Open victory last summer, Woodland has been rather average but owns advantages over Fowler in greens hit, putting average, birdies, and scoring since play started in 2020. They are virtually the same player when it comes to overall tee-to-green performance, but Woodland is the longer of the two, and that could play at a course that can be attacked in spots. Without a strong statistical advantage for Fowler or a long string of better finishes on Tour, it is hard to get in his corner against a recent Major champion. Note: Did you know that you can bet on golf at reduced odds? This place also offers the most props found anywhere! (BetAnySports)