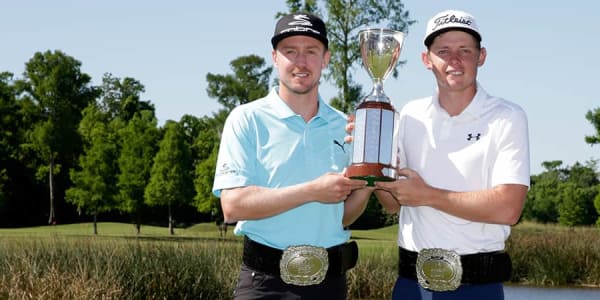 If different is your thing, you are in luck this week as the PGA Tour takes a break its normal singles format for a doubles event down south at the Zurich Classic of New Orleans. The Zurich has a history of singles play but debuted a doubles format in 2017 and the reception has been positive across the board with stronger duos appearing each year. The team of Jason Day and Adam Scott is the betting favorite (currently +650 at Bovada.lv) but teams like Sergio Garcia and Tommy Fleetwood (+800) will be a factor with Billy Horschel and Scott Piercy looking to defend their 2018 title. The Zurich utilizes a liberal sponsor exemption process, so we will get to see the Brooks/Chase Koepka combo that finished fifth here last season and David Duval as he pairs with Jim Furyk. Team golf is a fixture at all youth and amateur levels so while the doubles format is odd for Tour play, it is rather familiar for most in the field and perhaps a reason why more and more big names are signing up to play the Zurich Classic.

Teams will play better ball on days one and three, carding just the best score on each hole. Scores for that format are crazy low with each of the top-6 teams from last year shooting at least one round at 62 or better. Alternate shot is used in round two and during the final round and scoring in that format is much higher as it is all but impossible to hide a player that isn’t swinging or putting well. In 2018, teams averaged seven-under par per round during better ball play and one-over during alternate shot. Teams that can score in the 60’s during alternate will shoot up the leaderboard on Friday and we should all be on alert as 59 is a real possibility during better ball.

TPC Louisiana is a Pelican State gem that has plenty of local flair, most notably the stands of Cypress trees that line portions of the course. There is plenty of sand and water to navigate but overall, the 7,425 yard, par-72 course plays as one of the ten easiest on Tour each year, and that was before the switch to doubles play. Comparable courses in terms of difficult are the TPCs at Summerlin and Deere Run so expect low scores and a wide-open event with teams able to stockpile birdies.

Each week, we take a look at the online betting sites and highlight the best values on the board. We make a short, middle and long odds pick to win and breakdown a couple of head-to-heads that you can find at any golf betting outlet. Here are our picks to win the 2019 Zurich Classic of New Orleans.

Tony Finau and Kyle Stanley (20 to 1 odds to win at Bovada.lv)

Finau is clearly the star of this pairing and while it looks like he may have to do most of the heavy lifting, that same concept worked well with Finau and Daniel Summerhays taking 6th last year. Summerhays and Stanley have similar playing styles and the low-risk approach is a great fit for the powerful Finau who appears to be a horse for this course. Stanley is off his 2018 pace where he finished in the top-10 in both fairways and greens but his control game will allow Finau to utilize his top-10 driving distance to its full potential in better ball. When it comes to alternate shot, Stanley will be much closer than he typically is and that will allow him to use his solid approach game in a way that will be conducive to the pair scoring in that format. Neither player is elite on the greens but they should easily be one of the better teams on day one with Finau bombing away and the recipe is there for alternate shot success as well.

Charley Hoffman and Nick Watney (40 to 1)

Golf fans know how good this duo is much more than the average fan might. Both players have been around the PGA block enough to know all they need to about scoring in fast environments and their no-nonsense playing styles will help keep the ship afloat in the tougher alternate shot format. This team was a factor through three days here last year but they struggled on Sunday. I think that experience will serve them well and they both enter this week among the best in the field in approach proximity so look for their irons to set them ahead of the pack. Hoffman is coming off a T2 at the Valero just two starts back and his putting has been a big part of his improved play over the last month or so. Both players aren’t setting records off the tee but they can still put it out there long enough to take advantage of the scoring opportunities. This team has a lot of similarities and that will help them essentially caddie for each other as they will be seeing something from their partner that they are used to seeing. Grinders tend to do better in alternate shot and these guys aren’t afraid to put in the work.

This is your runner-up duo from last year and their most impressive stat was the alternate shot round of 68 they carded on Sunday to nearly take the win. They also shot 61 in the Saturday better ball so it looks like they have confidence in both formats. It would be really hard to argue that Dufner would be a good pick now in any individual event as his 207th ranked putter pretty much eliminates him from making enough birdies to be relevant but he still is a top-25 greens hit player. Perez is 4th best putter on Tour, ranking 2nd in strokes gained on the greens so Dufner can rely on his partner and that may very well free up his mind to simply play the game. This is one of the lighter hitting duos in the field but that didn’t stop them last season and they should be able to find themselves in good enough shape off the tee to put Dufner to use into the greens. Both players have been very reliable over the years and that is a quality that makes a good partner.

Picks to win are based on the predicted score after all four rounds are completed. be sure to price shop at multiple online betting sites for single round matches.

This seems like a bit of a no-brainer as Day and Scott are the betting favorites overall but Garcia and Fleetwood are no joke with both players inside the top-20 in scoring and Fleetwood inside the top-5 in both off-the-tee and overall tee-to-green performance. That is a really tough stat line to go against but Day and Scott are both top-35 in birdies as well as top-15 in putting. What you do on the greens is so important this week with scoring at a premium and the decided advantage is with Scott and Day there. Neither Garcia or Fleetwood ranks in the top-100 in birdies and that just makes me nervous despite both being very solid ball strikers. If it were a bit more difficult course, I think this would be a much closer competition but Day/Scott are rightfully the outright betting favorites and they are going to be strong in both formats. That leaves a slimmer margin for anyone to find an advantage against them and it appears that Garcia and Fleetwood will be losing strokes on the greens to boot.

Continuity and familiarity are important in doubles and Brown/Kisner played together last year while Watson paired with Matt Kuchar. Brown/Kisner got the better of that head-to-head and would have been a threat to win if not for a final round 77 that led to a T15 finish. Brown might be the weakest player in this group from an overall perspective but he is much better at finding the fairway that Holmes and is 40 spots better than J.B. in scoring average. He and Kisner aren’t winning the power game here but they will be in the fairways much more often are also the better team around the greens when it comes to saving par. A lot of their aggregate stats tend to even out but I really like Kisner’s 31st ranked putter and his top-25 fairways hit mark. He is the most steady player of the four and is also playing well. He will be the anchor on his team and the up-and-down nature of Holmes and Watson will lead to just a few too many mistakes or missed opportunities through the week. The +105 is a nice kicker for a Brown/Kisner team that would be a fine pick at -115.