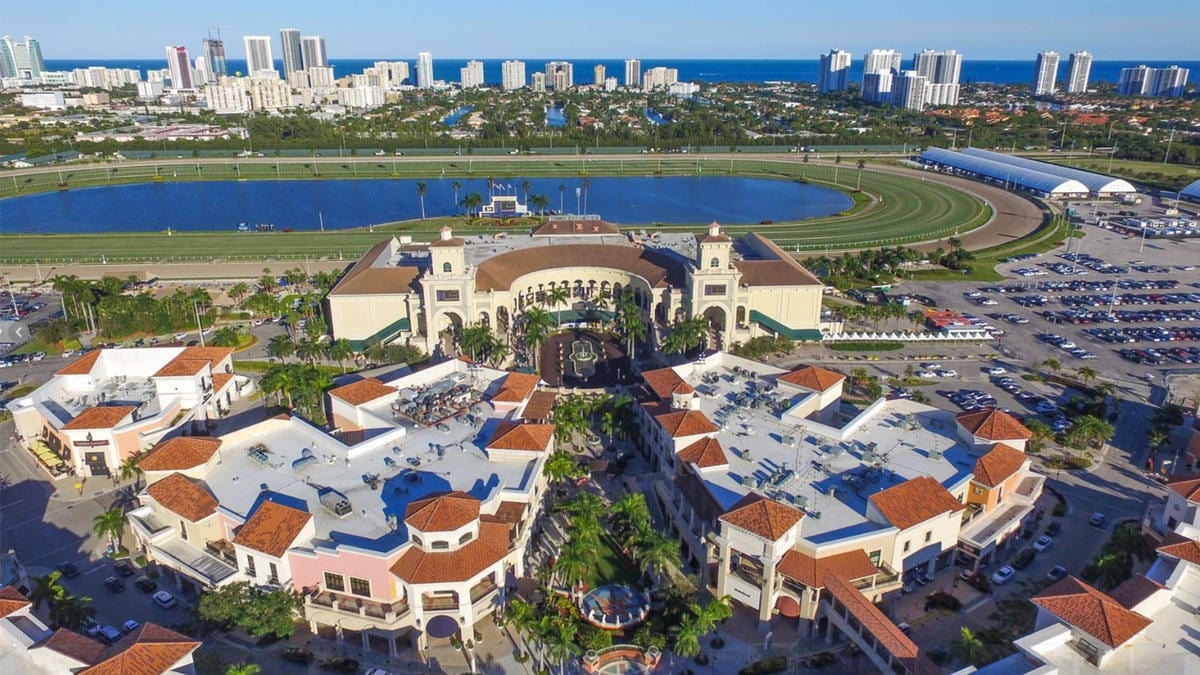 Located in Hallandale Beach, Florida, Gulfstream Park has been a premier Thoroughbred racetrack since 1939. Today, the track is more than just a racetrack, it includes a casino as well as a shopping mall and dining options.

Gulfstream Park conducted its first four-day race meet in front of a crowd of 18,000. The track closed and was reopened in 1944 by James Donn, Sr. for a 20 day meet in December. The first Gulfstream Park Handicap was ran in 1946 and the Florida Derby began in 1952. With the popularity of racing in Florida growing, the park expanded the grandstand and built a clubhouse. With the renovations complete, the Florida Derby was ran the next year with a purse of $100,000, the highest stakes horse racing purse at the time.

A big break for the park occurred in 1972, when they were awarded “middle dates” and allowed to expand their racing meets to 40 days, from January through April.

In 1982, the Grandstand was renovated again with new architecture and in 1984 the clubhouse renovations were completed. In 1986, the track was renovated into include the new Gulfdome, a domed dining area.

In 1990, Gulfstream was purchased by Bertram R. Firestone. In 1994, a half interest was sold to Nigashi Nihon. In 1999, the track was purchased by Magna Entertainment Corporation for $95 million. In 2010, ownership was taken over by Magna’s parent group, MI Developments, Inc. The next year, The Stronach Group took over.

In 2006, the track renovated yet again, this time turning itself into a racino. This renovation was highly controversial as fans felt that it ruined the track’s atmosphere.

In 2017, Gulfstream introduce the Pegasus World Cup. The Grade 1 rating was assumed from the Donn Handicap and is ran at 1 1/8th miles over the dirt. The race is open to four-year olds and up. Its inaugural running offered a $12 million purse, making it the richest horse race in the world, surpassing the Dubai World Cup. In 2018, the purse was raised to $18 million, but was reduced to $9 million in 2019. However, with the reduction in purse came the new Pegasus World Cup Turf race with a $7 million purse.

The 2017 winner of the Pegasus World Cup was Arrogate, trained by Bob Baffert and ridden by Mike E. Smith. In 2018, Gun Runner was the winner under Florent Geroux and trained by Steven M. Asmussen.

While Gulfstream has hosted many famous racehorses over the years due to hosting some of the most premier races in the world, such as the Breeders’ Cup. Here are a few that stand out in the minds of most race fans, either because of the pure athleticism or their effect on Thoroughbred breeding history.

Swaps – The Horse of the Year winner and 1955 Kentucky Derby winner, Swaps, came to Gulfstream for the Broward Handicap. The colt set a world-record of 1:39 3/5 for a mile and 70 yards carrying 130 pounds.

Bold Ruler – While the park hosted the famous Bold Ruler, in 1956, the horse was defeated by Gen. Duke in the Florida Derby, setting a world record of 1:46 4/5. Bold Ruler would go on to become the 1957 Horse of the Year after winning the Preakness Stakes and Trenton Handicap. The horse defeated Hall of Famers Round Table and Gallant Man that year.

Holy Bull – In 1994, Holy Bull won the Florida Derby. Although he failed to perform as expected in the 1994 Kentucky Derby, he did have several other major wins including the Haskell Invitational, Travers Stakes and Woodward Stakes. He was also the 1994 Horse of the Year. In 1995, he suffered a career-ending injury in the Donn Handicap at Gulfstream.

Cigar – Cigar won the Donn Handicap and Gulfstream Handicap in 1995. He would go on to become America’s top money earner with $9,999,815 before Curlin broke his record in 2008. He retired to the Kentucky Horse Park to live out his days and passed at the age of 24.

Thunder Gulch – Won the Fountain of Youth Stakes and the Florida Derby in 1995. He would go on to win the Kentucky Derby at 25-1 odds.

Monarchos – Monarchos also won the Florida Derby in 2001 before going on to win the Kentucky Derby. He was scheduled to run in the Donn Handicap as a four-year-old, but after running in a third prep race, he retired in 2002 with a tendon injury.

Angel Cordero Jr. – In 1980, Angel Cordero Jr. set a meeting record of 60 winners. He would become the first Puerto Rican to be inducted into the US Racing Hall of Fame. He won the Kentucky Derby three times aboard Cannonade, Bold Forbes and Spend A Buck. He won the Preakness Stakes twice aboard Codex and Gate Dancer and the Belmont once with Bold Forbes.

Jerry Bailey – The Hall of Fame jockey rode his last race on Silver Tree in the Sunshine Millions. He also won the Florida Derby on Barbaro.

While Gulfstream hosts live racing and many different stakes races December 1st through March 31st, there are several premium stakes races to catch on their schedule: