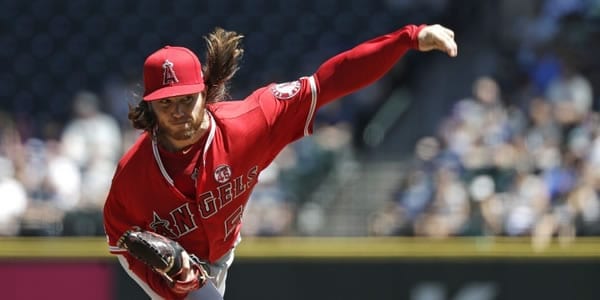 Well, this is an odd situation for the Red Sox to be in, as they didn’t get to finish Wednesday night against the Royals, taking a suspended game after the rain stopped the action in the top of the 10th. Leaving aside Boston’s problems for the moment, this could be an interesting dynamic for the Red Sox going into this series with the Angels. While Los Angeles didn’t have to travel (and was already in the Eastern Time Zone) or play on Wednesday, Boston was on the field late and didn’t have the game called until around 1 a.m. Thursday morning. The Red Sox won’t have a lot of time to get themselves right, which could be costly against a rested opponent.

It certainly is for the Angels, who just completed a five-game pratfall along Interstate 71, dropping three in Cleveland and two to Cincinnati to leave the Buckeye State with a six-game losing streak intact. This could be written off by the fact that the Angels seemingly never play well in Ohio, having now lost 17 of their past 18 in the state, but there’s a problem with that theory. Before this nightmarish trip began, Los Angeles dropped two of three to the Tigers and three of four to the Orioles on a seven-game homestand. Any time you’re losing series to the likes of Detroit and Baltimore at home, something isn’t going according to plan.

For the Angels, pretty much everything hasn’t been going according to plan as of late. They seemed to have turned the corner when they swept two games from the Dodgers in the Freeway Series at Dodger Stadium, but they’re 2-10 since beating baseball’s best team. One of the reasons for the problems has been the Angels’ flirtation with Tampa Bay’s opener strategy, which was about as successful in Ohio as Johnny Manziel’s NFL career. Taylor Cole got two starts as the opener and got shelled, giving up six runs to Cleveland and five to Cincinnati in a combined 1.1 innings of work to put both games well out of reach in the first inning.

Luckily for the Angels, Dillon Peters took over from Cole in Cleveland and pitched pretty well, going 7.2 innings and holding the Indians to just one more run. He’ll be the man with the ball from the beginning this time, as the Angels appear to have abandoned the opener for the time being.

What in the world has been going on with Chris Sale this season? He is just not the same pitcher that he has been in past years, and unless he’s been facing off against AL East opponents outside of the Yankees, things keep going wrong for him. Red Sox Nation has waited all year for him to turn the corner after a dreadful start to the season. But, if anything, he’s heading in the opposite direction at this point. After two straight bombings by the Yankees, he’s now allowed five runs or more in five of his past seven starts, and the two exceptions were the Blue Jays, who are going absolutely nowhere, and at Tampa Bay, where Boston plays better than it does anywhere else, Fenway included. With just over seven weeks to go in the season, it’s looking like this is just a lost season for Sale — as it might well be for the Red Sox.

This meeting is the first of the year between these teams, and the Angels will be hoping it turns out better than last year when the Red Sox swept the season series 6-0. However, Los Angeles’ history at Fenway isn’t nearly as bad as its history at Cleveland — the Angels took two of three from the Red Sox in Boston in 2017.

Storms remain in the area, with the temperature projected to be at 84 degrees at first pitch.

Do I really have to take either of these two teams? These might be the two coldest teams in baseball right now, as they’ve both looked just awful over the past week. The Red Sox faced seven must-win games for their playoff chances and lost all seven, while the Angels have been losing to the likes of the two worst teams in the American League at home before dropping their first five on this road swing.

So in a situation like this, I’ve got to go for value, and with the Red Sox, there is simply none right now. Sale hasn’t pitched well all year, he’s coming off two thrashings against New York, and his team is 1-9 in its past 10, with the one being Kansas City at home.