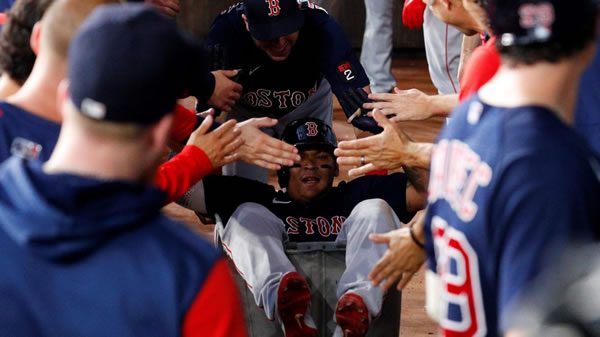 The Boston Red Sox host the Seattle Mariners on Thursday, May 19th at Fenway Park. The first pitch in this matchup is scheduled for 07:10 ET. The MLB Odds Board places Boston as the favorite (-130), with an OU line set at 8.5.

The Seattle Mariners will look to pick up another big win after they defeated Toronto by a score of 5-1. Overall, the team’s pitching staff limited Toronto to 1 run on 7 hits. The Mariners lineup had a good night at the plate, coming up 10 hits, leading to 5 runs. Seattle picked up the win, despite getting 210.0 on the moneyline. n This matchup remained below the over-under line set at 8.0 runs. This outcome pushed Seattle’s over-under record further below .500 at 18-19-1.

Over the Mariners’ last 5 contests, they have a record of just 2-3. This mark has come on an average run margin of just -3. In their last 5 contests, Seattle is averaging 3.8 runs per game, right in line with their season average of 3.84. Seattle’s overall series record is just 4-7-1.

The Boston Red Sox will be looking to pick up another win, as they most recently defeated the Astros by 4 runs (5-1). For the game, the pitching staff held the Astros to 1 run on 2 hits. At the plate, the Red Sox scored 5 times on 5 hits. Despite being the underdogs, getting 110.0 on the moneyline, the Red Sox still picked up the win. So far, the team has gone into 19 games as the underdog, still finding the win column at a rate of 42.0%. Combined, the Red Sox and the Astros’ run total fell below the OU line of 9.0 runs. This result comes as no surprise, as the team’s over-under record is just 12-22-3.

Across their last 5 contests, the Red Sox are above .500, going 3-2. They have managed to pick up these wins despite having an even run differential. Overall, the Red Sox are averaging 3.81 runs per contest. But, over their last 5 outings, they have been scoring at a clip of 5.4 runs per contest. Boston has a below .500 series record of just 3-7-2.

For the Mariners, starting pitcher George Kirby has yet to factor into a decision. In his previous outings, Kirby has lasted an average of 5.0, putting together an ERA of just 0.9. So far, batters are hitting just 0.194 against him. In his first 2 appearances, Kirby did not give up a home run. Up to this point, Kirby has a strikeout percentage of just 21.0% and a per game average of 4.0. Throughout the season, Kirby has avoided walking batters, allowing just 0.9 per contest.

Boston will roll with Rich Hill (1-1) as their starter. So far, Hill has put together an ERA of 2.89. In his appearances leading up to today, he has lasted an average of 4.67 innings. So far, Hill has a batting average allowed of 0.229., and has managed to keep the ball in the ballpark, allowing just 0.64 home runs per 9 innings. Overall, he is averaging 3.5 per game, on a K rate of 19.0%. Leading into the game, he has shown a strong command of his pitches, averaging just 2.25 walks per contest.

Today’s game between Seattle Mariners and Boston Red Sox is their matchup of the year. Dating back to last season, Boston picked up 4 wins compared to 3, taking the season series. The average scoring margin in these games was 3.29, with an over under record of 6-1. Last year, the two teams combined to average 10.43 runs per game.

In this matchup, I recommend taking the Boston Red Sox and the experience of Rich Hill over the Mariners and George Kirby. Even though the Red Sox have had their problems on offense, they have been slightly better against right-handed pitching. On the other side, Seattle has a combined batting average of just .204 vs left-handed pitching. I like the Red Sox on the moneyline.

Free MLB Pick: Boston Moneyline. Bet your MLB predictions for FREE this week by scoring a 100% real cash bonus on your first deposit up to $500 when you use bonus code PREDICTEM at Betnow Sportsbook.