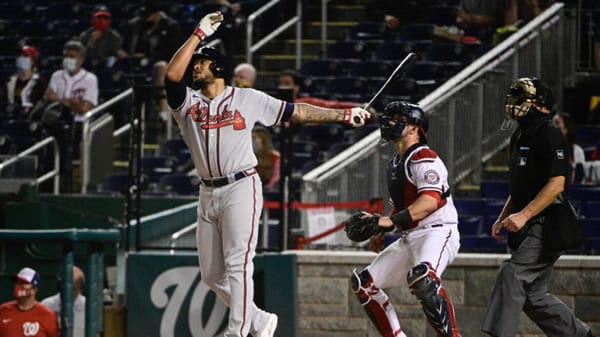 Moneyline: PHI -115/ATL -105 (Dime Line Baseball Betting - Don’t get fooled into paying more for favorites and getting paid less for underdogs! Make sure you’re wagering with one of these books!)

Most teams prefer to win two out of three games in every series they play because a team that can take two out of three on a consistent basis is very likely to be playing meaningful baseball in the fall. The Braves, how-ever, have gone for a different tactic: they’ve bounced between sweeping one series to getting swept in the next.

Over their previous three series before facing the Phillies, the Braves have gone from taking three out of four from Chicago to getting swept in Toronto to going to Washington to earn a sweep. That’s made the Braves a tough team for bettors to figure out, as their lack of consistency has made it difficult for anyone to get any kind of read on them.

So far, Atlanta has been a nightmare for bettors because the Braves have usually been favored and have only occasionally justified the public’s faith in them. Other than the Dodgers and Rockies, the Braves have been the worst return in the National League in 2021.

The bullpen was unbelievably disastrous for Philadelphia last season, but this year, it’s been a strength more often than not. However, in this series, the action for Atlanta mainly comes in the second half of the game. The Braves have fallen behind early in both games, getting outscored 8-0 in the first inning of the contest. In the first game, scoring six runs in one inning proved enough of a cushion for Philadelphia not to have to worry about the rest of the game, but in the second, Atlanta was able to battle back and come up with the tying and eventual winning runs in the late innings.

This game could represent a live-bet opportunity if the first two innings prove to be slow; given the late-game heroics from the Braves, another early start for the Phillies could represent a perfect chance to cash in later.

Get a free $60 Credit at Docsports >>> Expert Baseball Picks!

Turned On Its Head

For the first part of the year, this was a low-scoring matchup, with the first three meetings between the teams producing a combined 12 runs in a park that’s known for its offense. But in the past six meetings, the offense has carried the day for both sides. When the teams have met in Atlanta in 2021, at least nine runs have been scored in every game, and the past three meetings have all topped double digits, capped off by the Braves’ 8-7 victory on Saturday.

Both Nola and Ynoa have managed to pitch against the opposite team without torching their ERA, but Ynoa only pitched one inning in relief when he faced the Phillies, hardly much of a sample size. On paper, these pitchers look like they can hold the score down, but the recent outbursts of the offense make it a real won-der as to whether they can have success in this matchup.

The winds could work against the offenses here, as winds will blow in from right field heading south-southwest at 11 miles per hour. It’ll be a warm evening in Atlanta, with temperatures at 81 degrees.

Nola’s got a bit more history of success beyond 2021, as Ynoa is just 22 years old and has shown that he can get hit hard when things go in the wrong direction. Against the Cubs, Ynoa managed to give up six earned runs because he couldn’t keep the ball in the park, resulting in three long balls over the course of four in-nings.

With the only real blemish on Nola’s 2021 being a trip to Coors Field, there’s a lot more reason to trust him in this spot. As such, even with their poor road record, I’ll take the Phillies here. Rough weekend? Your bankroll need a boost? Boost it with a 100% real cash bonus on your first deposit of $100 to $1000 at BetNow Sportsbook!