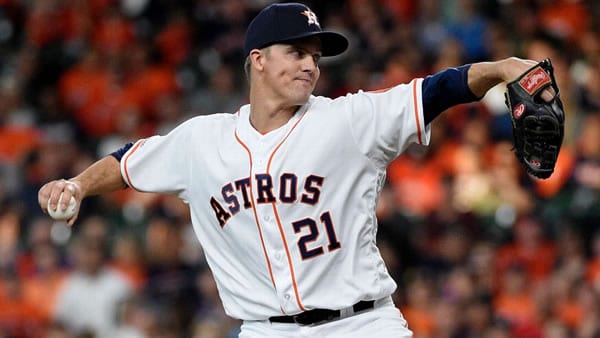 King of the Over

The memo hasn’t seemed to reach the sportsbooks yet, but betting the over when Zack Greinke pitches has been a fantastic strategy. The books keep setting the total somewhere between eight and nine runs whenever Greinke takes the ball, but six out of Greinke’s past eight starts have seen 10 runs or more cross the plate, with the remaining two producing nine runs each. As such, the over has now cashed in eight consecutive starts from the 37-year-old.

The main reason that the books keep putting the totals relatively low when Greinke pitches is that the high numbers really aren’t completely his fault. He hasn’t given up more than four runs in any of his past eight starts, and in three of them, he ended up giving up two runs or less, something almost any pitcher would be thrilled with. The other factor is that Greinke’s doing about all he can to reduce the runs he gives up, as he’s been getting far more ground balls than he has fly balls. In only two of his starts this season has he allowed more fly balls than grounders, and with teams going heavy on trying for home runs, anything he can do to prevent the ball being hit in the air has the potential to make a difference.

Things just haven’t gone the way they should have for Eduardo Rodriguez, who has seen his once strong win/loss record disintegrate in May and June. Rodriguez finally was able to return to his early-season form a little in a win over the Yankees, but prior to that, he was writing a four-match losing streak and had taken the hit to his record in all four starts.

A look at Rodriguez’s recent numbers show that his ERA has climbed steadily from its 3.82 mark that it had on May 7 going into its game with Baltimore. To be fair, the Red Sox haven’t been telling themselves any favors when Rodriguez takes to the hill, as they’ve scored just five runs in his past four appearances. But with Rodriguez not missing bats and hitters usually able to wait him out for a base hit, the pitching and defense are as much to blame for Boston’s problems as its lack of hitting.

For whatever reason, close games and the Red Sox’s record really aren’t on speaking terms right now, as Boston’s overall record has closely mirrored its record on the runline. The Red Sox have 36 wins on the runline this year against 37 wins overall, suggesting that those bettors who opt to take Boston on the moneyline have been leaving money on the table as of late.

On the other side of the coin, the Astros’ tendency to play to the over has only really worked with Greinke and Jake Odorizzi on the mound for Houston. Otherwise, the Astros have either found their bats silenced or done just enough on defense to keep the opponent from getting the inning they need to break the game open.

The wind will be mild, coming in at eight miles per hour and heading toward the third-base dugout. The weather will be mild as well, with temperatures at 64 degrees at first pitch.

Houston has won four of five away from home, and most of them haven’t exactly been close games. Just one of the Astros’ past 10 games has been decided by only a run, so it’s actually not a bad idea to take a risk on giving runs with the Astros. Houston seems to really be hitting on this road trip, and Rodriguez hasn’t been pitching well at all as of late.
Given the downward trajectory of Rodriguez and the Red Sox over the past few weeks, Houston seems to offer solid value. Give me the Astros here. Bet your baseball picks FREE this week by scoring a giant 100% REAL CASH bonus on your first deposit of $100 to $500 at GTBets!