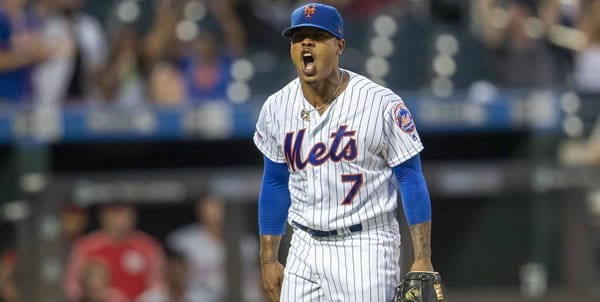 It’s a new year, but it looks like the same old bullpen for the Mets, who have been well known for blowing leads after Jacob deGrom turns in a brilliant start. There’s a reason that savvy bettors tend only to bet the Mets to lead after five innings rather than to win the game, and it’s because the bullpen in Queens is a heck of a lot less reliable than the No. 7 train. The Mets had it happen again on Monday, as they conceded five runs to the Phillies in the eighth and ended up turning a 2-0 lead into a 5-3 loss.

To be completely fair, the loss wasn’t entirely on the bullpen, as only two of the runs were earned, and three scored because of an error, but the fact remains that the Mets once again gave away a game that they had no business losing in the late innings. If New York is going to compete for the NL East title, it has to hold on to its leads.

It’s been a while since we’ve seen Marcus Stroman throw a pitch, as the hurler chose to opt-out of playing last year because of COVID concerns. So after a year away from the game, what kind of pitcher will the Mets be putting on the mound? When Stroman last showed up in Queens, he was rather ordinary compared to the strong starter he’d been in Toronto. His ERA rose nearly a full run to 3.77, and his WHIP was the second-highest it had been in his career.

The one thing Stroman consistently did well in Queens was miss bats, as he averaged just over a strikeout per inning in his first year with the Mets. With the Phillies’ power hitters off to a solid start to their campaign, missing bats will be a big part of Stroman having a successful first start.

Philadelphia wasn’t supposed to be a contender this season, but the Phillies are off to a 4-0 start after sweeping the Braves and overcoming a late deficit against the Mets. Truth be told, this probably isn’t sustainable for them unless they plan to keep holding opponents to low scores. The Phillies have only scored 14 runs on the season, in large part because their non-power hitters aren’t getting on base very often, leaving the power hitters with little opportunity to drive in runs.

But they’ve allowed only six runs on the season, as Philadelphia has gotten excellent work from both its starters and its bullpen to date. Chase Anderson now takes the ball, and he’s got some pressure to perform here because the Mets were the team that caused the beginning of the end of Anderson as a starter in 2020. In his final start for Toronto/Buffalo in 2020, Anderson gave up four runs in 2 2/3 innings, and the Blue Jays ended up with an 18-1 loss. Anderson was no better in relief, as he followed that up by giving up five home runs in an inning when he came out of the pen in a loss to the Yankees. The Phillies will be hoping that they simply get something decent from him here.

There’s a slight breeze here of six miles per hour coming north-northwest, which will likely knock down a few balls from right-handed hitters, as the wind is blowing in from left-center.

I’m not sure I’m buying Philadelphia’s early start, especially given how badly Anderson struggled last year. The Mets have many the same pieces from last year’s 18-1 rout, and they know how to hit Anderson. Given that this game’s in Citizens Bank Park, the “over” looks awfully tempting here, especially with the Mets’ bullpen struggles.

I’d rather have New York in the first five in case the bullpen does something dumb again, but I’ll take the risk on the overall win for the Mets and eat the small chalk. Bet this month’s MLB picks for FREE by taking advantage of a 100% REAL CASH bonus on your first deposit of $100 to $1000 at BetNow Sportsbook!