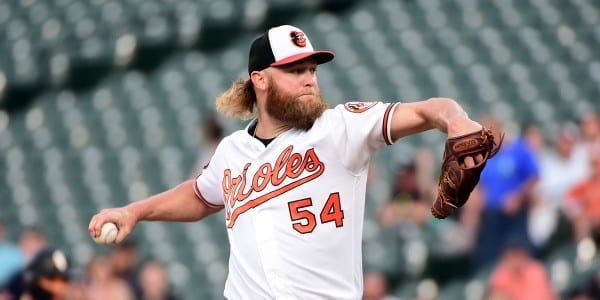 First place in the AL East meets last place when the Yankees and Orioles open a four-game series Monday night in Baltimore. How are we playing this game with our free MLB pick?

Monday’s MLB betting odds opened New York and Happ at around -165 over Baltimore and Cashner, with an over/under of 9.5 runs. Early betting action then steamed that line to -185. 10¢ MLB Sportsbooks had pricing up to 7 cents better on either side as the line changed throughout the night.

The Yanks could also be found giving around -120 giving the run and a half on the MLB run line.

New York just took two of three games at home from Tampa Bay over the weekend, winning Sunday’s series rubber match 13-5. That game was tied at 5-5 when the Yankees put up a seven spot in the bottom of the sixth, on their way toward victory.

At 28-17 overall the Yankees now lead the AL East by a half-game over the second-place Rays.

Baltimore, meanwhile, just dropped three of four games to the Indians in Cleveland over the weekend, losing Sunday’s series finale 10-0. The Orioles stuck out 15 times Sunday.

At 15-31 overall the Orioles occupy last place in the AL East, 13.5 games back of first-place New York.

The Yanks lead the season series with Baltimore six games to two.

Cashner is 4/9 on quality starts this season and three for his last four. Last Wednesday he limited this New York team to two runs and four hits through six innings, although the Orioles lost that game 3-1. And over his last four starts he’s allowed eight earned runs and 19 hits through 23 innings.

Baltimore, a team that’s 16 games under .500 on the season, is 5-4 with Cashner, and while the Orioles are 0-3 over his last three starts that’s not his fault.

Over his last six starts against the Yankees, two this year and four last year, Cashner allowed 20 ER and 35 hits through 35 1/3 innings. Baltimore went 2-4 in those games.

Lefty Happ is 3/9 on quality starts this season, but 0 for his last three because he hasn’t pitched six innings. Last Wednesday he gave up three runs and five hits, including a couple of homers, in a 5-3 Yanks victory over these Orioles. And just before that he tossed five innings of one-hit, shutout ball against the Mariners.

In three starts already this season against Baltimore Happ allowed nine ER and 15 hits, including five dingers, through just 13 2/3 innings. The Yankees went 2-1 in those games.

New York is batting .254/.334/.449 against right-handed pitching this season. But this lineup is still operating without several key sticks, including Aaron Judge and Giancarlo Stanton.

Baltimore is batting .233/.285/.364 against left-handed pitching this season. This lineup has also been held to three runs or less seven times in its last 10 games.

The Yankees bullpen owns a 4.04 ERA this season and a 1.27 WHIP while converting 13 of 19 save opportunities.

The Orioles bullpen owns a 5.96 ERA and a 1.54 WHIP, both of which rank near the bottom in the Majors, while converting 8/13 on save opportunities.

New York is +48 on run differential this season, which ranks fifth-best in the Majors, while Baltimore is -95 on RD, which ranks dead last. So not only are we going with the Yankees here, we’ll give the run and a half against the run line.