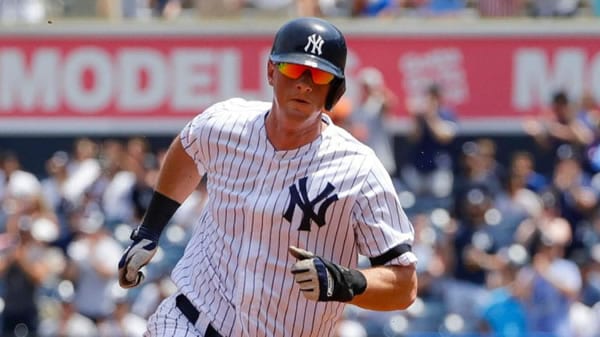 The offense that everyone expected from the Yankees finally showed up this week, as New York absolutely blitzed Toronto, scoring 43 runs in a three-game series to sweep the Jays and improve their win streak to eight straight. The days of the Yankees possibly missing out on the postseason now seem like a distant memory, as New York is now in prime position to claim second place behind the Rays or perhaps even win the AL East.

Part of it is because of the schedule has turned in New York’s favor, but part of it is also because the Yankees are starting to get healthy again. DJ LeMahieu leads the league in batting average despite missing a week, while Luke Voit has become the league leader in home runs with 20 in 46 games. Plus, Aaron Judge will finally start returning to the lineup, as the Yankees plan to ease him in with two starts in three games at Fenway Park.

Add it up, and you’ve got a team that’s powering through its opponents at precisely the right time — a thought that should terrify the rest of the American League.

Say this for Boston: at least they’re still fighting. The Red Sox will not be in the playoffs this season, but at least they’re showing some pride and making life difficult for some teams. Boston just beat Miami in a three-game set in South Florida, and the Red Sox previously split a series at division leader Tampa Bay.

Now, can the Red Sox finally figure out how to get some wins at Fenway Park? Boston has been simply abysmal at home this season, as the Red Sox have a record of just 8-17 on the year in Massachusetts. They also haven’t given Martin Perez much in the way of support when he’s taken the mound, which is why the Red Sox have been doing a lot of losing while the left-hander has been on the mound. Boston has lost six of Perez’s past seven starts, and the Red Sox scored four runs or less in five of those starts. That’s a big reason why the under has a 6-2-2 mark in Perez’s starts this season, as he’s actually been one of Boston’s more consistent pitchers during this odd season.

To say the Red Sox haven’t enjoyed facing the Yankees this year is a little like saying 49ers fans didn’t enjoy the fourth quarter of the Super Bowl back in January. The Bronx Bombers have beaten the tar out of Boston all season long, outscoring the Red Sox 50-23 and winning all seven games over their archrivals on the run line. Boston has only come within two runs of New York on two occasions this year, while the Yankees have scored six or better four times. The current numbers suggest the Yankees would be projected to score six runs, making this an ideal time to jump on New York’s team total.

However, there’s one caveat to this beating: The teams haven’t played at Fenway yet this year. New York has crushed Boston all year long, but all seven games were played in the Bronx. Home field has meant nothing to Boston without its fans, but the Yankees have also been relatively weak on the road. This situation might not favor either team.

The wind is blowing in from left-center and coming north-northeast at nine miles an hour, not quite enough to disrupt balls heading toward the Monster. The temperature should be a cool 61 degrees at first pitch.

Boston seems to be playing a bit better these days, but I cannot ignore that the Yankees have routed the Sox all year long and seem to be hitting their stride at the right time. Eight straight doesn’t happen by accident, and the outburst at home to Toronto showed that the Yankees still have the hitters to hang with anyone in the American League once they’re all healthy.

The Red Sox won’t throw in the towel against their most bitter rival, but this just isn’t their kind of situation against a fired-up Yankees squad. I’ll take New York to hit the runline again.