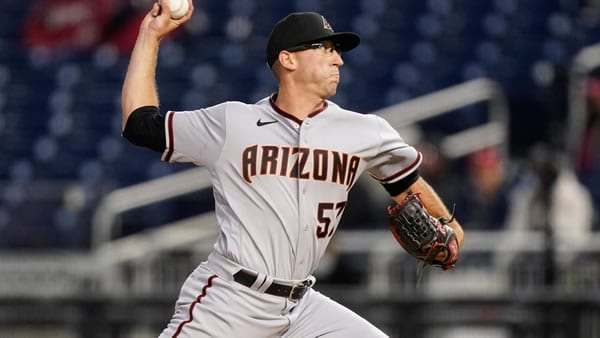 Jinx in the Desert

You would think that San Diego has learned how to play in Arizona by now, given that the Padres and Diamondbacks have been in the same division ever since Arizona’s first season in 1998. But for whatever reason, the trip west on Interstate 8 has been a nightmare for San Diego, even as the Padres have steadily built themselves into a genuine contender while the Diamondbacks have floundered. Last year, Arizona finished 12 games behind the Padres in the 60-game sprint, yet went 5-5 against San Diego, a better split than anyone in the NL West except the Dodgers got against the Padres.

You can’t read too much into history with San Diego because the Padres have only recently become a genuine contender, but the fact remains that they’ve consistently been unable to beat Arizona, no matter how good they are. In the past seven seasons, Arizona has won the season series against the Padres six times, with the one exception being 2015 when San Diego managed a 10-9 win over the Diamondbacks.

Most people have the perception of the Padres as a young, fun, hard-hitting team. And if you’ve been betting that way, you’ve likely had to replenish your funds recently because San Diego has been playing to the under pretty frequently as of late. Seven out of the Padres’ past ten games have gone under the total, with the only exceptions being three games against the Dodgers, which saw the total set absurdly low.

San Diego can put up runs at times, but the Padres’ pitching is better than most people think. San Diego has given up just 89 runs on the season while scoring 94, numbers that put them firmly in the range of seven or eight runs per game. Arizona is a higher-scoring team by a good margin, as the Diamondbacks are averaging five runs per game and haven’t been held under four runs in a game since April 17.

One of the few Arizona pitchers who has experienced pitching without run support is Widener, who was on the mound for his team’s most recent shutout. Of course, he held Washington scoreless in that game but couldn’t get anything from his team and had to watch as the bullpen gave the Nationals the only run of the game. Widener has bounced between strong starts and middling performances, as he’s given up four runs in two of his starts and held the opponent scoreless in the other two.

The question is whether that had more to do with the opponent or with consistency because the two games where Widener struggled both came against Cincinnati. If it’s the opponent, that’s good news for Widener because one of the teams he pitched well against was San Diego, as he earned a 3-1 win for Arizona with six scoreless innings on April 4.

The Diamondbacks might close the roof with the temperature pushing to 84 degrees, but if they play outdoor baseball, the wind will blow southwest at eight miles per hour, pushing balls to right-center.

San Diego really doesn’t like playing in Phoenix, and the Padres’ offense still hasn’t managed to get any level of consistency going. Plus, the Diamondbacks are hot right now, having won seven of eight, and they’re finally getting to play some home games after playing 17 of their first 23 on the road. Widener’s also had some success against the Padres, and Ryan Weathers hasn’t shown that he can be a consistent starter after moving from the bullpen.

I like the home dog here; I think the conditions are right to take a shot with Arizona. Bet your MLB picks for FREE this week by scoring a 100% real cash bonus on your first deposit of $100 to $500 at GTBets Sportsbook!