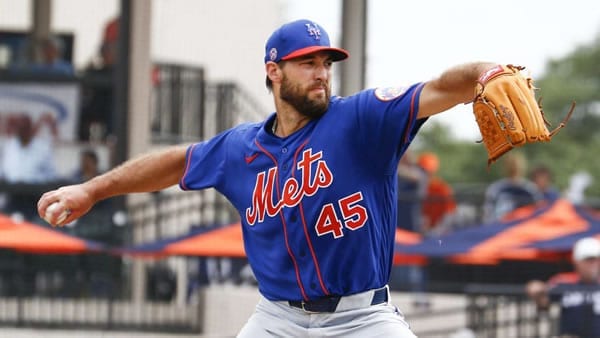 Both of these teams looked solid on Day 1. But, they now come into this matchup as losers of their past two. New York’s problems stem entirely from an inability to hit, as the Mets managed just five runs for the entire series at home against Atlanta. Throwing Jacob deGrom can paper over a lot of problems, especially when he throws a 1-0 shutout as he did in the opener, but the Mets showed neither the offense nor the bullpen to get the job done when their ace isn’t on the slab.

However, as rough as the Mets’ Saturday and Sunday was, at least it came against the Braves, who are likely to win the NL East when all is said and done. There’s no such excuse for the Red Sox, who fell behind early against the bottom-feeding Orioles and ended up dropping two out of three to a team that’s lost over 100 games in consecutive seasons. Boston’s bullpen is also a liability, and like the Mets, the Red Sox don’t have the ability to overcome a bad day from their starter. However, Boston was able to hit against Baltimore, so that’s currently not a worry for manager Ron Roenicke. But the Red Sox offense isn’t going to be good enough to do the job if the pitching continues to let them down.

The opener strategy is best used by a team like the Rays or Indians, who have an array of arms available to shut down their opponents. When the bullpen isn’t a strength, the opener strategy is ill-advised, but the Red Sox are going with it anyway, opting to use Josh Osich to start the game and go for two or three innings. Osich might not be the best choice for this situation as he didn’t start any games last season with the White Sox and has really struggled against the Mets when they’ve faced off. In nine appearances against New York, Osich owns a 6.48 ERA.

That’s not exactly something that inspires confidence in your opener. It’s even worse for Boston knowing that what’s behind him didn’t get the job done on consecutive days against the lightly-regarded Orioles. If Boston is going to make this work, the bullpen has to be much better than it was against Baltimore.

Blast From the Past

The last time Michael Wacha faced the Red Sox, the stakes were quite a bit higher. Wacha was the man on the mound when the Red Sox and Cardinals faced off in the final game of the 2013 World Series, which ended with Boston winning the championship at Fenway Park. Since then, Wacha has been a decent starter for St. Louis but has had a few problems with control at times. Over the past two seasons, he’s walked an average of four hitters per game, and walks were among the primary ways Boston gained an advantage in their opener against Baltimore.

The Red Sox didn’t work out any walks in either of the final two games, which says that either they were gripped by impatience or the Orioles simply bore down and put together two excellent performances. History with the Orioles suggests it’s probably the former, which means that Wacha has to make sure he’s at least around the strike zone so he can get the Red Sox to get themselves out. If he’s issuing free passes, this won’t end well for the Mets.

All signs point to this being the time when the Mets are going to break out of their slump. Atlanta was able to shut them down, but this is a team that’s built around run prevention and had one of the stronger pitching staffs in the National League last year. Boston is not the kind of team that’s going to keep opponents from scoring, and Fenway Park is not the kind of ballpark that lends itself to low-scoring affairs. This could be the time to jump on the Mets to put up a solid offensive number, as Pete Alonso and Yoenis Cespedes aren’t going to keep struggling at the dish forever.

It’s going to be a hot night in Massachusetts, as temperatures are forecast to hit 86 degrees.

I’m really low on Boston this year, and that was the case even before the Red Sox dropped two of three to the Orioles. I think the Red Sox will finish a distant third or even fourth in the AL East, and I think the Mets are better than they showed offensively against Atlanta.

This line might be moving throughout the day toward New York, so I’d grab the Mets while you can still get them for a good price. Where are you betting bases this season? There’s a 99% chance that you’re overpaying for odds. Why waste money? Make the switch to reduced juice betting at 5Dimes and start reaping the benefits!