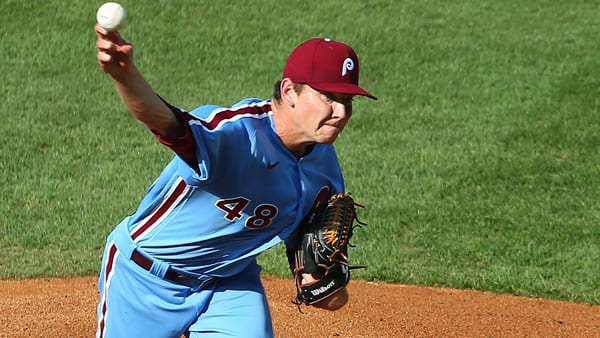 Running Out of Time

Having the World Series champion miss the playoffs isn’t that unusual, given the usual unforgiving nature of a baseball season that allows just one-third of its teams to qualify for the postseason. But the Nationals are in grave danger of managing to miss the playoffs in a year where more than half of all MLB teams will qualify for the postseason, which would be an embarrassment less than a year after the franchise’s proudest moment.

Things haven’t been made any easier by their performance against the Phillies, as Washington has lost both of the first two games of the series to Philadelphia and has scored just five runs in 18 innings. That says two things to me. First, given the lack of success from the Nationals’ offense in the early parts of the game, it might be a good idea to look into taking the under on the total for the first five innings.

Second, and more importantly, Washington either doesn’t have the urgency or doesn’t have the ability to come back from the hole that it’s dug for itself. In either case, that’s a sign of a team to fade over the last 30 days, as the general public won’t give up on the World Series champion any sooner than it must. This could be an area to use this to your advantage.

For the past two games, Max Scherzer has looked like anything but an ace. Against Baltimore and Miami, two teams that aren’t really thought of as quality offensive sides, Scherzer gave up four home runs and nine earned runs, leading to losses against both the Orioles and Marlins. Maybe the expectations on Scherzer were just too high, and he’s just coming back to earth, but the fall has been kind of swift and stunning in the past couple weeks.

Scherzer has already had a start where he didn’t make it past the first inning because of a back issue, and it’s fair to wonder whether his back is bothering him again. When an injury is the problem, it usually takes a bad start or two before the team decides enough is enough and sends him to the injured list. Washington might be waiting on that because this season is so compressed, which could give us another edge.

With the Phillies, when wins or losses have come this season, they’ve tended to come in bunches. The Phillies ride a three-game win streak, but prior to that, the Phils had a five-game losing streak, a four-game win streak, and another three-game slump. It’s given Philadelphia a slightly under .500 record, and it’s made them a tough team to figure out. When the Phillies get some momentum going, they tend to build on it in both positive and negative directions, so the best strategy with the Phils has been to back them to do the same thing they did the day before and hope that you’re not late on getting on the trend.

Humid conditions and a wind blowing south at 12 miles an hour should create ideal conditions for home runs. With the temperatures at 88 degrees, this could be an offensive-heavy game.

It’s hard to go against Scherzer under any circumstances, but the reality is that he hasn’t pitched well in either of his past two starts, and he’s having problems keeping the ball in the park. That’s not a good combination going into a game where the conditions are ideal for the ball to start sailing toward the bleachers in left-center, and it makes me wonder if there’s something seriously wrong with Scherzer.

I think the over is the best play, given that the Phillies counter with a rookie in Spencer Howard. Beyond that, there’s no way I feel comfortable laying the wood with Scherzer in his current condition. It’s a significant gamble here, but I’ll back the Phillies. Where are you betting baseball this season? Does your bookie offer you dimelines? Does he accept credit/debit cards? The best live betting platform on the web? A 50% real cash bonus and rebates on ALL of your action? NO HE DOESN’T! Stop settling for anything less than favorable conditions and get signed up at Bovada Sportsbook. (<- See our review) You’ll be so glad you did! Click here to sign up now!