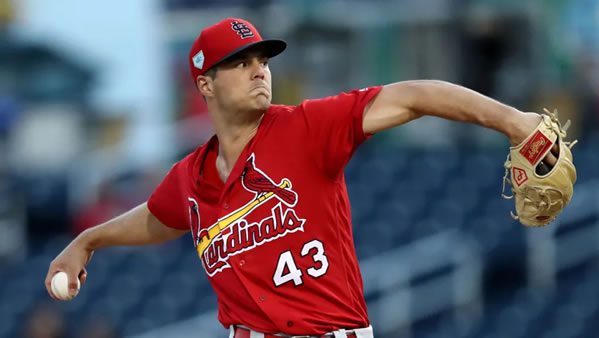 The St. Louis Cardinals host the New York Yankees on Friday August 5th at Busch Stadium. The first pitch in this matchup is scheduled for 08:15 ET. The MLB Odds Board places New York as the favorite (-145), with an OU line set at 8.5.

The Yankees are hoping to get back on track after falling to the Mariners by a score of 7-3. In the loss, New York’s pitchers gave up 7 runs on 10 hits. Offensively, they finished with just 3 runs on 5 hits. Yankees suffered the loss, despite being favored at -170.0. Through 98 games as the favorite, the team has found the win column at a rate of 67.0%. With the over-under line set at 7.0 runs, the Yankees and Mariners combined to go over this total. New York now has an over-under record of 54-49-3.

The St. Louis Cardinals are coming off a big win over the Cubs by a score of 7-2. In the winning effort, the team’s pitchers held the Cubs to 2 runs and 2 hits. In the victory, the Cardinals came up with 10 hits and 7 runs. St. Louis picked up the win while being favored at -180.0. So far, the team has won 67.0% of the games in which they were favored. The Cardinals and Cubs went over the run total line set at 8.5 runs. Against the run total, St. Louis is just 48-53-4.

Across their last 5 contests, the Cardinals are above .500, going 4-1. Their recent success is backed by an average scoring margin of +16 (last 5). St. Louis is still playing winning baseball, even with their offense averaging just 5.6 runs per game, compared to a season long mark of 4.65. On the season, St. Louis has won more than half of their series, going 15-9-8.

New York will roll with Nestor Cortes (9-3) as their starter. Currently, Cortes has an ERA of just 2.53 while pitching an average of 5.59 innings per outing. So far, batters are hitting just 0.214 against him. Per 9 innings pitched, Cortes is averaging 1.1 home runs allowed. Per game, Nestor Cortes is averaging 5.84, on a strikeout percentage of 26.0%. Command has been a problem for Cortes, as he is giving up 2.02 walks per outing.

In today’s game, St. Louis turns to starter Dakota Hudson. For the year, he has a record of 6-6. So far, Hudson has put together an ERA of 4.1. In his appearances leading up to today, he has lasted an average of 5.32 innings. Compared to other starters, the right-hander has a high BA allowed of 0.256. Opposing batters are hitting for power at a below-average rate against Hudson, as he is allowing just 0.71 per 9 innings. Overall, he is averaging 2.84 per game, on a K rate of 13.0%. Hudson comes into the game hoping to improve his walk numbers, as he is averaging 3.92 free passes per outing.

Today’s matchup between the New York Yankees and St. Louis Cardinals will be their first meeting of the season.

Heading into Friday’s Interleague matchup between New York and St. Louis, the Yankees are the favorite on the moneyline. Look for Dakota Hudson to struggle vs one of the best lineups in baseball. On the other side, Nestor Cortes comes into the game with a WHIP of just 1.02. Look for New York to come away with the win.

Free MLB Pick: Yankees Moneyline. Deposit $250 and get $250 FREE when you use bonus code PREDICTEM at Betnow Sportsbook! This offer is also good for a $500 deposit in which you’ll receive a $500 bonus! This is a REAL CASH bonus! Not a crappy free play/match play!