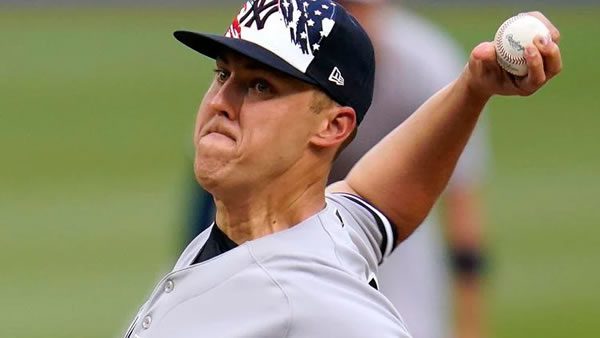 The Boston Red Sox host the New York Yankees on Sunday August 14th at Fenway Park. The first pitch in this matchup is scheduled for 07:08 ET. The MLB Odds Board places New York as the favorite (-135), with an OU line set at 9.0.

In the New York Yankees’ last game, they picked up a 3-2 win over the Red Sox. Overall, the team’s pitching staff limited the Red Sox to 2 runs on 8 hits. On offense, New York’s lineup put together a total of 6 hits, leading to 3 runs. In the matchup, New York was favored at -150.0 on the moneyline. So far, the team has been the favorite in 105 of their games, winning at a rate of 65.0%. Combined, the Yankees and Red Sox fell short of the over-under betting line of 9.0 runs. New York games have still surpassed the over-under line more than half of the time, at 56-54-4.

The Yankees will be hoping to pick up a win in today’s matchup, as they have gone just 2-3 over their last 5 games. Despite their below .500 record (last 5), in this stretch, the team still has a positive run differential at +3. On offense, New York’s offense has experienced a dip in production, averaging 3.4 runs per game over their last 5 contests. So far, New York has won over half of their 38 series played, going 23-9-6.

The Red Sox will look to bounce back from a tight 3-2 loss to the Yankees. Even in the loss, the pitching staff allowed just 3 runs on 6 hits. With their 8 hits, the Red Sox could only plate 2 runners. This loss came as no surprise, as Boston came into the game as the underdog, getting 126.0. So far, the team has gone into 53 games as the underdog, still finding the win column at a rate of 40.0%. With this result, the Red Sox and Yankees combined to fall below the over-under line of 9.0 runs. This result comes as no surprise, as the team’s over-under record is just 52-56-7.

The Red Sox come into today’s game looking to turn things around, as they are just 2-3 over their last 5 games. During this time, the team has a run differential of -5. In their 5 most recent contests, the team is scoring at a rate of 4.0, similar to their season-long average of 4.46. Boston has a below .500 series record of just 14-17-6.

New York will roll with Jameson Taillon (11-2) as their starter. To date, Taillon has an ERA of 3.95 while lasting an average of 5.46 innings per appearance. So far, Taillon has a batting average allowed of 0.244. Opposing batters have been able to drive the ball with power against Taillon, averaging 1.35 homers per 9 innings pitched. In terms of strikeouts, Jameson Taillon has a strong strikeout percentage of 21.0%, including a per-game average of 4.73. Command has been a problem for Taillon, as he is giving up 1.79 walks per outing.

In today’s game, Boston turns to starter Michael Wacha. For the year, he has a record of 6-1. Currently, Wacha has a strong ERA of just 2.69 while pitching an average of 5.39 innings per outing. Overall, opponents have a batting average of just 0.215 against the right-hander. Wacha is allowing home runs at a rate of 0.9 per 9 innings. Wacha’s current strikeout average is 3.85 per game. This includes a K rate of 18.0%. For the season, he has struggled with command averaging 2.82 walks per outing.

For the season, the New York Yankees and Boston Red Sox will be playing their 13th game of the season. New York has the lead in the series at 7-5. The over-under record in this series sits at 8-4. The average run total in these games is 7.85 runs per game. In these matchups, the average scoring differential sits at 3.75 runs. Boston won last year’s head-to-head series, grabbing 11 wins to 9. The over-under record in last year’s matchups was 6-13, with the average run total being 7.85 runs per game. On average, the winning team won by a margin of 3.05 runs per contest.

Heading into Sunday’s AL East showdown between New York and Boston, the over-under line is set at 9 runs. However, both Jameson Taillon and Michael Wacha’s expected stats reveal that opposing batters have had no problem hitting the ball hard. Look for this to be a higher-scoring game than expected. I recommend taking the over.