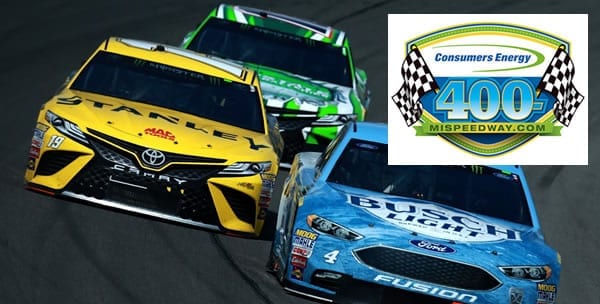 Let me tell you what - that had to be one of the best races I’ve seen in a long time! I literally yelled at the TV like I used to do a decade ago. There was some great racing this weekend at Watkins Glen, where the drivers ran aggressively throughout the day and really showed us what they are made of. There was a lot of rubbin’ and a lot of angry drivers. Regardless, the happiest of them all had to be Chase Elliott. He managed to take the checkers again from the pole. He’s making history and doing it in a dominating fashion. Elliott managed to outrun Martin Truex Jr. in the closing laps to secure yet another victory and what seemed to be a repeat of last year. Truex closed the gap and even managed to have fenders alongside Elliott, but it was evident that Chase was the class of the field throughout the entire race. He beat Truex by more than 0.4 seconds. Elliott also made the Chevrolet teams proud, as he is the only Chevy driver to win multiple races this year. What was once an anomaly has become the norm for Chevrolet, unfortunately, but it seems that Elliott has something to say about it.

Quite frankly, while Elliott winning the race was all well and good, the best part of the race was watching Kyle Busch get spun out by Bubba Wallace after Busch relentlessly ran into many drivers throughout the course of the race. Wallace finally tired of these moves and gave Kyle a little taste of his own medicine, gently pushing him around, causing Kyle to lose a lot of ground. Worth it. The crowd roared! It was pretty epic. Kyle seems to think that he’s above being hit by other drivers, but he’s going to learn with these young guys that they aren’t going to let him slide just because of this name. He’s going to have to give respect to get respect from a lot of them, and I’m glad they’re not letting Kyle drive right through them.

Where Are We Headed This Weekend

This weekend, the drivers are heading to Michigan for the second time this year. We had a race back in June that Joey Logano won, so he’ll be looking to repeat. Michigan is a 2-mile D-shaped oval with 18 degrees of banking in the turns, 12 degrees along the frontstretch, and 5 degrees on the backstretch. It’s a very fast track, which creates some issues with engine failures in the long runs. Drivers and teams that can make the most horsepower will very often be the most successful here, though. With speeds reaching over 200 mph, this particular track really showcases what NASCAR is trying to do with this aero package. Tires come to mind as well, as we often see long green flag runs, causing a good amount of wear of these Goodyears.

When it comes to picking a potential winner at Michigan, again, we need to focus on the teams that are making the horsepower. There is obviously one team that stands above the rest, and that is the Penske garage. Joey Logano and Brad Keselowski should see success this weekend. I wouldn’t even put a 1-2 Penske finish out of the picture. Brad has some work to do, being that he’s never won at what he considers his home track. That said, these guys know speed, and lest you forget, Brad doesn’t lift! There will be other drivers that contend with these guys. We have the usuals in Kyle Busch, Martin Truex Jr., and even Kevin Harvick. Shoot, Harvick has led more laps at Michigan than any other driver in the last five races. That’s saying a lot. But, leading the most laps doesn’t make you the winner. That last lap is the only one that needs to be led. Let’s take a look at your potential winners this weekend heading into Michigan:

I still think that Hemric has a lot to offer. Although he struggled some at Watkins Glen, he’s getting better. He’s definitely making strides, and these intermediate tracks give these guys an opportunity to shine. There are not many tricks. It’s simply a matter of running a smooth race. If Hemric can take care of his car and stay out of trouble on pit road, he will have a respectable finish. Not only that, but he’s going to make a lot of people a whole lot of money if they take a risk and win. Ryan Blaney is another Penske driver that often gets forgotten, but in only three starts with this team, he’s managed a top 10 finish each and every time. That’s something to celebrate. I think that we are going to see a repeat with this kid getting closer to a win at Michigan. At 20-1 odds at BetNow , Blaney will give you a solid payout as well if he surprises us with a victory. That said, they will all be chasing the defending champ of the last Michigan race who has a total of 3 wins here. Joey Logano will be the class of the field even if he’s not the current favorite. He doesn’t have anything to lose. The kid is sitting pretty in the points. Let’s take a look at where the drivers are standing after Watkins Glen.

Here are your current top 16 in the points and their odds from BetNow:

With only 4 races left in the regular season, these guy are going to race pretty hard. Jimmie Johnson crept his way back into the top 16 after Watkins Glen, which always seems to be a solid race for him. I think that he’s going to fall back out after Michigan, though. I still think that there’s something to be said for Aric Almirola, Ryan Blaney, Alex Bowman, and William Byron holding their own. They’ve maintained their positions through consistency. We are seeing a really solid group of young drivers coming up. As sad as I am to see the old generation fading out, it’s nice to see some competitiveness among the younger guys. There’s a lot of talent there. Let’s see what they do with it this weekend as we head into a great Sunday of racing at Michigan International Speedway!