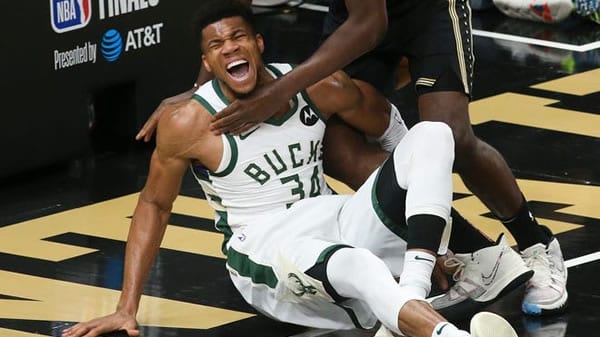 This Eastern Conference finals comes down to a best-of-three situation, beginning with Game 5 Thursday night in Milwaukee. But the rest of this series probably won’t be what it could be, with both teams probably without their big stars. First, Atlanta lost guard Trae Young to an ankle injury, and now Milwaukee is without Forward Giannis Antetokounmpo after he suffered a knee injury Tuesday night. All of which makes picking these games even tougher. Who’s better; the Hawks without Young or the Bucks without the Freak? Here’s our homework for this Game 5, with our free NBA pick ATS.

The NBA playoffs betting market opened Milwaukee at -4.5 for this Game 5, with an over/under of right around 220. Early betting action then dropped the Bucks 2.5 points to -2 and that total five points to 215.

Milwaukee could also be found giving -125 on the Game 5 money line at Bovada while Atlanta was getting +113 to win this game outright at BAS.

This series is tied at two games apiece following Atlanta’s 110-88 Game 4 victory Tuesday night. The Hawks, playing as eight-point home dogs without Young, popped out to a 10-2 lead and never trailed from there. Atlanta later led 62-54 when Antetokounmpo hurt his knee midway through the third quarter and left the game, never to return. The Hawks then finished the Bucks off from there, using a 25-8 spurt to take total control and pull this series back to even.

Atlanta shot 51 percent from the field on the night while holding Milwaukee to just 39 percent field-goal shooting.

Also, Game 4 played well under its post-time total of 216.

With Tuesday’s win/cover, the Hawks are now 10-6, both SU and ATS, this postseason.

On the all-important injury front, Atlanta G Trae Young is listed as questionable for Thursday night with that sore foot, as is Milwaukee F Giannis Antetokounmpo, after he hyper-extended a knee Tuesday night. The Hawks were already playing without F De’Andre Hunter, while the Bucks were already without G Donte DiVincenzo. So it looks like team depth is going to decide who wins this series.

Milwaukee finished five games ahead of Atlanta in the regular-season standings, 46-25 to 41-31, and took the season series from the Hawks two games to one. So the Bucks are now 4-3, both SU and ATS this season against Atlanta.

Unders are 13-4 in Hawks games this postseason.

Unders are 10-4 in Bucks games this postseason.

Unders are 3-1 in this series, as the games are averaging 215 total points against an average over/under of 223.

Unders are 38-37 this NBA postseason.

The NBA can be a strange place and tough going for bettors, sometimes defying logic. Atlanta lost Young, then won a key game. Over in the Western Conference, the Clippers lost Kawhi Leonard and still won several games before finally succumbing to the Suns Wednesday night. Key injuries play crazy with the point spreads but oftentimes bring out the best in teams, who rally among themselves and get surprising performances from supporting casts. Ultimately, this Game 5 and this series might come down to who’s better; Atlanta without Young or Milwaukee without the Freak. And we believe the answer to that question is the Bucks. So we like Milwaukee here for our free NBA playoffs pick for Thursday. Bet your NBA playoffs picks FREE by taking advantage of a 100% real cash bonus on your first deposit of $100 to $300 at MyBookie Sportsbook! (Must use bonus code PREDICT100 to get the additional funds credited to your betting account.)