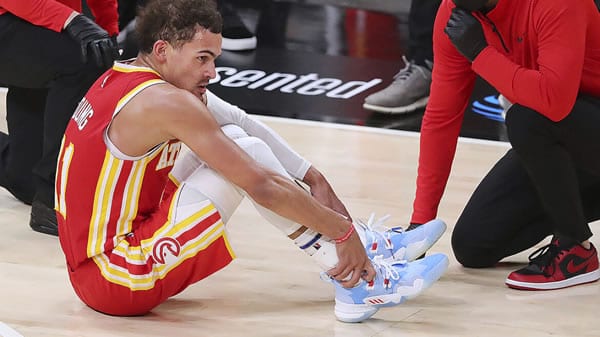 The Milwaukee Bucks find themselves once win away from their first NBA Finals berth since 1974, heading into Game 6 of this Eastern Conference finals Saturday night in Atlanta. The Bucks played very well without the injured Giannis Antetokounmpo in winning Game 5 Thursday night, and they’ll probably play without him Saturday night, too, as he recovers from that sprained knee. Meanwhile, the Hawks might again play without Trae Young, who’s hampered with that sore foot. Can Milwaukee put Atlanta away? Can the Hawks avoid elimination? And how are we betting this game with today’s free NBA pick?

The NBA playoffs betting market opened this game at a pick ’em, with an over/under of right around 215. Early betting action then slid Atlanta into 2.5-point chalk and bumped that total to 216.5.

The best Game 6 money line we could find on the Hawks was the -145 offered at Bookmaker, while Milwaukee was getting at +132 at Pinnacle to win this game outright.

Milwaukee leads this best-of-seven series three games to two after taking Game 5 Thursday night 123-112. The Bucks, playing without the Freak, jumped out to a 30-10 lead on Atlanta, which was playing without Young, and took a 65-56 advantage into the half. Milwaukee let the Hawks get within six points early in the third quarter but quickly pulled back out to a double-digit lead and held on from there for the victory and the money as a 4.5-point favorite.

On the night, the Bucks shot 51 percent from the floor, held Atlanta to 46 percent FG shooting, out-rebounded the Hawks 47-40, and dominated points in the paint 66-36.

With Thursday’s win/cover, Milwaukee is now 11-5 SU, 9-7 ATS this postseason.

With Thursday’s loss, Atlanta is now 10-7 both SU and ATS this postseason.

Also, the Bucks are now 5-3, both SU and ATS against the Hawks this season.

On the injury front, both Antetokounmpo and Young are listed as questionable for Saturday night. However, we give Young a slight chance of playing, while we’re almost certain the Freak won’t. If Young plays, he certainly won’t be his full self, but just his presence on the floor might help the Hawks.

Unders are 9-5 in Bucks games this postseason.

Unders are 11-5 in Hawks games this postseason.

Unders are 3-2 in this series, as the game is averaging 219 total points against an average over/under of 221.

Totals are split 38-38 this NBA postseason.

We liked Milwaukee to win this series from the beginning and still do. But that doesn’t mean we can’t bet Atlanta here. The Bucks shot out to a 20-point first-quarter lead Thursday and got 33 points on 14/18 FG shooting from Brook Lopez. Our guess is neither of those things will happen Saturday night. And we think Young might give it a go, which could provide the Hawks with at the very least a morale boost. The “zig-zag” theory is 3-1 ATS in this series, and while we’re not actually big believers in it, we’re playing it in this spot. We like Atlanta for our free NBA playoffs pick for Saturday.