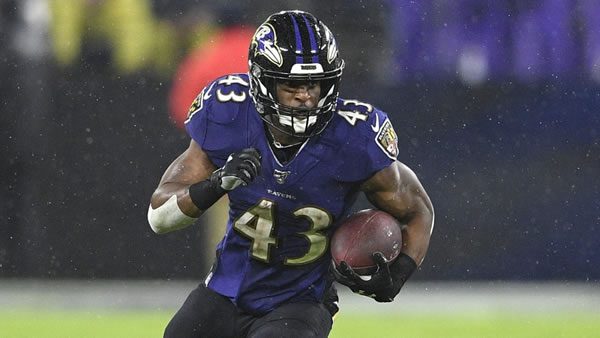 Are the New York Giants a legitimately good team that’s put together a few solid wins and might make a run at the playoffs, or have they simply lucked their way into a fraudulent 4-1 record that’s about to come crashing down like a house of cards? It’s tough to say, but this game with Baltimore should help give a little more perspective as to which is true. The Ravens might legitimately be the best team left on the Giants’ schedule outside of division games, which speaks to just how weak New York’s schedule is this year. The Giants obviously have a long way to go until the playoffs, but with the quality of opponents (or lack thereof) left on the slate, they might legitimately parlay their way into a shot at the postseason.
Baltimore was supposed to be in a dogfight of a division this season, but that hasn’t happened either. With the Bengals trapped in Super Bowl hangover mode, the Browns unable to decide on their identity and unable to stop the run, and the Steelers a shell of the team that they had when Ben Roethlisberger was under center, the Ravens have almost become the best by default in the AFC North. Baltimore has the most dangerous player in the division in Lamar Jackson, but he’s made more plays with his leg than his arm this year. Which of these flawed teams with quality records gets the job done?

How the Public is Betting the Baltimore/New York Game

The public is evenly split on this game, with 51% of all tickets coming in on the Giants. The money is not split, as the line has jumped from Baltimore -4.5 to -6 despite the Giants’ win over Green Bay. The total has not changed.

With Baltimore, there’s not much of a secret for how you play defense. Keep Lamar Jackson contained, force him to beat you with his arm, and you’ve got an excellent shot to take down the Ravens. Baltimore’s offense isn’t really all that great with the pass unless Jackson is going to Mark Andres, who has basically been unguardable at tight end. The Bengals tried to lock him down last time out and couldn’t contain him, giving up eight catches for 89 yards and a score on ten targets.
And both of those things speak to how effective Andrews is as a tight end and how ineffective Baltimore is overall with the pass. Andrews leads the Ravens in receiving yards, and when a tight end is doing that, either your passing game is pretty weak, your wide receivers aren’t very good, or you have a transcendent tight end. In the Ravens’ case, it’s a combination of the first and third options. Andrews is an outstanding tight end, but Jackson usually looks his way first when his option to run gets cut off. If a team can keep him covered and slow down Jackson on the ground, the Ravens become much easier to handle. But with New York struggling to stop the run, stopping him is a tall order.

The Giants have two major conundrums here. First, they have to find out whether or not Saquon Barkley will be able to play. If he is healthy, running the ball will likely be a high priority for New York. If not, the Giants have to figure out something else because they are one of the few teams that runs more than they pass. The Giants are outstanding on the ground with Barkley, but Daniel Jones still doesn’t look like the answer at quarterback. New York ranks 31st against the pass, tossing for just 154.2 yards per game.

And in this game, that is an issue, because the easiest thing to do against the Ravens is throw the football. Baltimore ranks dead last against the pass and gives up nearly 300 yards per game via the air, which should be easy for New York to exploit. However, Jones is at his best when he’s trying not to lose the game, not when the Giants need him to win it. Baltimore likely will intentionally play to its weakness in this situation, knowing that beating teams with his arm is not where Jones excels. The Ravens’ passing defense isn’t quite as weak as Jones and the Giants’ attack, so expect Baltimore to sell out to stop the run in the name of letting the Giants throw if they dare.More Picks: Get our handicapper’s BUF/KC best bet for Week 7 >>>

The Ravens usually don’t turn in multiple bad showings for bettors. They did win last week over Cincinnati, but they failed to cover, and Baltimore has covered in five straight games where it was coming off an ATS defeat. Plus, the favorite has covered in five of the past six meetings, although these teams also don’t play each other all that often.

On New York’s side of the ledger, don’t come to New Jersey if you’re looking for an offensive showcase. The one football team that actually plays in the Empire State puts on an offensive show each week (Buffalo), but the Giants play across the Hudson, where offense goes to die. Rutgers doesn’t put up points, the Jets don’t and the Giants don’t: the under is 33-16-2 in the Giants’ past 51 home games.

Clouds will dominate the sky, but the temperatures should be pretty reasonable at 69 degrees at kickoff. However, winds will be sustained at nine miles per hour west-northwest, and wind gusts will blow at 20 miles per hour.

Until you know if Barkley will play, stay away from the Giants. New York doesn’t have much of anything if he doesn’t suit up, as Jones isn’t good enough to do the job even against Baltimore’s weak pass defense.

I’m leaning toward the Ravens just because they’re the safer play here. I’ll back Baltimore to cover. Bet your Week 6 NFL predictions for FREE by scoring a 100% real cash bonus up to $300 when you use bonus promo code PREDICT100 at MyBookie Sportsbook!