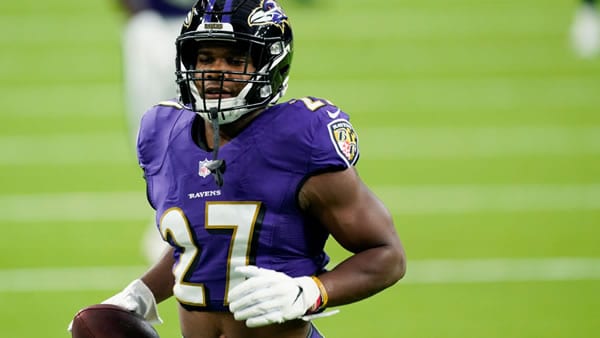 It’s a rematch of an AFC divisional-round playoff bout from last season when the Ravens take on the Titans for an AFC wild-card game Sunday afternoon in Nashville. Tennessee upset top-seeded Baltimore in that playoff game last year and beat the Ravens again earlier this season. But the Titans are lined as home dogs for Sunday’s game. Who do we like here for our free NFL wild-card betting pick?

NFL wild-card betting odds opened Baltimore as a road favorite of 3.5 points for this game, with an over/under of right around 54.5. Early betting action then dipped the Ravens to -3 and the total to 54.

According to Sagarin’s NFL ratings at USAToday.com, Baltimore should be favored by four points for this game.

Baltimore is back in the playoffs for the third straight season, after going 11-5 to clinch the No. 5 spot in the AFC standings this season. The Ravens started 6-2, with wins over Cleveland, Washington, and Indianapolis, the only losses coming against division champions Kansas City and Pittsburgh. Baltimore then suffered through a virus situation, played without several key players, and lost three games in a row to New England, this Tennessee outfit, and the Steelers. But the Ravens then regained strength and finished with five straight wins, piling up tons of yards and points. Last week Baltimore concluded its regular season with a 38-3 romp over Cincinnati.

The Ravens racked up 404 yards on the ground against the Bengals and covered easily as 13-point favorites.

Baltimore out-rushed each of its last six opponents, all by large margins. The Ravens also just happened to go 6-0 ATS over their last six games.

Get -105 reduced juice on sides and total bets at BAS!

The Titans, meanwhile, are back in the playoffs for the third time in the last four seasons, after going 11-5 and winning the AFC South. Tennessee started 5-0 this season, with four close victories over sub-.500 teams and a romp over what turned out to be an excellent Buffalo team. The Titans then struggled through a 1-3 stretch, which included a loss to a bad Cincinnati outfit. Tennessee then finished 5-2, with wins over this Baltimore team and Indianapolis, the losses coming against the Browns and Green Bay. Last week the Titans concluded their regular season with a wild 41-38 victory over Houston.

Tennessee ran the ball for 288 yards last week, as RB Derrick Henry popped off for 250 and two touchdowns. So the Titans out-rushed eight of their previous ten opponents.

Tennessee only played 7-9 ATS this season in part because it was favored by too much too often. Four times this season, the Titans won games outright but not by enough to cover the spread. However, Tennessee also played 3-2 ATS this season as an underdog.

These two teams played six common opponents this season; Baltimore played 7-2 SU and 8-1 ATS against the Jags, Steelers, Texans, Bengals, Colts, and Browns, while Tennessee played 5-4 SU but 3-6 ATS vs. those six foes.

These teams have already met twice in the last calendar year, Tennessee winning both games. First, the Titans used three Baltimore turnovers to upset the hell out of the Ravens in a divisional-round playoff game last January 28-12. Then, seven weeks ago, Tennessee rallied from a 21-10 third-quarter deficit to beat Baltimore 30-24 in overtime.

The Ravens actually out-gained the Titans in that playoff game last year 530-300 but, as mentioned above, turned the ball over three times, directly resulting in 14 Tennessee points, and got stopped on fourth down four times, three times inside Titans territory.

Back in November, Tennessee out-gained Baltimore 423-306.

The Under is 9-7 in Ravens games this season, which averaged 48 total points.

Overs played a lopsided 12-3 in Titans games this season, which averaged 58 points.

The Under is 15-5 over the last five wild-card weekends.

Tennessee owns those two recent victories over Baltimore, but we gotta believe it’ll be hard to beat a team like the Ravens three times in a row. Also, Baltimore owns the better defense and the better record against common opponents this season. And while we don’t consider revenge a reliable handicapping factor, we’re thinking it might come into play here. Plus, the line moved slightly in our favor. We like the Ravens, minus the points. Bet your NFL playoffs picks LIVE after they start at the best live betting platform on the plane: Bovada Sportsbook!  They’ll also give you a 50% bonus up to $250! They also give rebates on ALL your bets whether they win, lose or draw! FAST hassle-free payouts too!