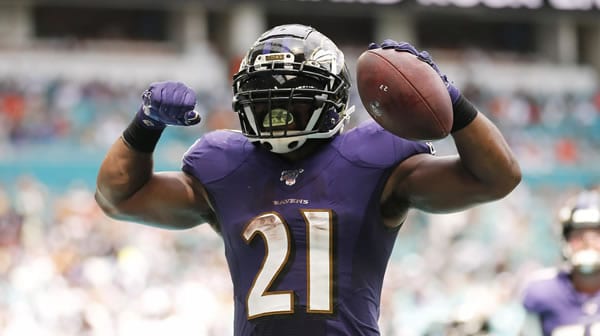 The Dallas Cowboys take on the Baltimore Ravens on Tuesday, as both teams try to make their playoff push. Oddly, the 3-9 Cowboys might be in a better playoff position than the 6-5 Ravens. With three losses in a row and a rash of positive covid tests, the Ravens are in need of a spurt. Unlike any other 3-9 team in memory, the Cowboys is still in the mix, though they need to do better than their last appearance—an embarrassing 41-16 loss to Washington on Thanksgiving. But they are rested, on schedule, and not in a realm of uncertainty like the Ravens are. Who can cover the number at MT&T Stadium?

Can Ravens Reclaim Their Edge Just in Time?

It’s not unheard of for good teams to hit the skids before reverting back to prior form in a timely fashion. The Ravens need that to happen. At their current rate, even if they make the postseason, it’s impossible to envision them working their way through this conference. They should be getting a gaggle of players back for this week, particularly Lamar Jackson. They get back some of their running backs, and perhaps the urgency of their situation will resonate. And let’s face it, with a Cowboys team coming out of their conference and having looked awful in their last game, this could be an ideal spot to breathe some life back into the operation.

It’s just that over the course of the season, we’ve seen the Ravens deteriorating in the very areas that allowed them to be the talk of the league last season. Jackson is still a dynamic star, just with fewer demonstrations of his full scope of abilities this season. The run game still has a lot of horsepower and variety, just without the same resounding impact. Jackson hasn’t made great use out of Hollywood Brown or Mark Andrews (out), as the aerial game is often muted and not near the threat it was. It’s almost now as if the Ravens’ best chance is to see another late-season surge from the defense. After watching them hold the Steelers to 19 points even as their offense ground to a halt, the “D” might be the greatest source of optimism on this team right now.

Does Dallas Have it in Them to Take Advantage?

Looking at Dallas this season, with the long string of losses, the injuries, and the uninterrupted patch of non-covers, even a spot against the crestfallen Ravens, fails to inspire much confidence. After a high-visibility collapse against a 3-win Washington team, those feelings were only bolstered for many observers. Still, they had shown some life in the previous two weeks, with close losses to the Vikings and Steelers being their only covers of the entire season. And when a Dallas team that was fancied by some as a leading contender in the NFC falls as flat as they have, covering spreads isn’t going to be easy.

A big problem for Dallas for the purposes of this particular matchup is their run defense. It manifested in their last game, with gigantic run plays left and right leaving the Dallas “D” grasping for answers. Even as the Baltimore passing game has suffered, Jackson not ripping off giant runs all the time, and the offense, in general, having gotten somewhat lackluster, they still have a lot of dogs who can run the ball, and it’s hard to envision it not taking hold at some point in the game.

It’s just that when you start to make a case for Dallas, a lot of the bullet-points fall flat. It’s true they have Ezekiel Elliott, but he hasn’t really looked like the same guy this season. They have talented receivers like Amari Cooper, CeeDee Lamb, Michael Gallup, and others. But without Prescott in the fold, getting these guys to shine has been elusive. And while they have standouts in the middle of their defense and a serviceable secondary, a “D” that seemed headed in the right direction just hasn’t pulled its weight—ranked last in the league in points allowed, last in rushing defense, and last in securing turnovers. The bottom-line is that they’re a bad team, only still breathing because they play in a division that has reached record-breaking levels of futility.

More Picks: Bookmark and visit to get our experts’ NFL picks >>>>

Baltimore in This Role?

Generally, when laying points on this scale, you’d prefer not to take a slip-sliding team whose roster was battered by covid. Ideally, you wouldn’t take a team that has begun to fall flat where finding answers hasn’t been easy. Teams like that are having a hard enough time getting wins, never mind covering big point-spreads. If Dallas can summon the motivation and realize that a lot is still on the table, you could be getting a better effort here than what you’d generally expect from 3-8 teams playing in unfamiliar territory. It just hasn’t been pleasant for Dallas backers expecting something different this season. And when things line up in a way where you’d think they have a chance, they fall flat.

It’s a hard thing to do. The Ravens look broken lately, a team far removed from the fierce form we saw last season and even earlier this year. I just think Dallas is one of those teams that might not be able to do much about it. And it isn’t even X’s and O’s, but more a flatness, a lack of fire, and the sneaking notion that the Cowboys are sometimes even phoning it in. I see the Baltimore run-game manifesting here, as the Ravens pull away late for the win and cover at home.

Loot’s Prediction to Cover the Point Spread: I’m betting on the Baltimore Ravens minus 9 points. Bet this week’s picks for FREE by taking advantage of a 100% REAL CASH bonus on your first deposit of $100 to $1000 at BetNow Sportsbook!