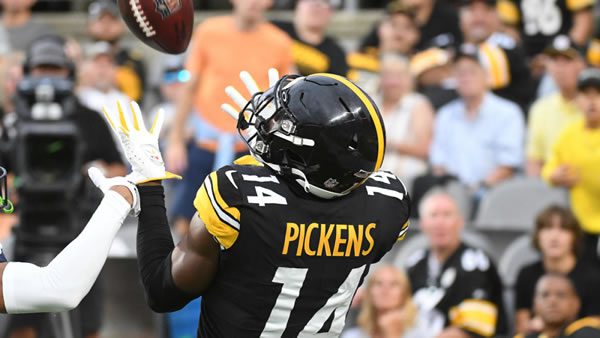 Point Spread: LV +3/PIT -3 (WagerWeb – Move the line up to 20 points with their massive NFL teasers!)

The Las Vegas Raiders battle the Pittsburgh Steelers in a week 16 AFC battle of 6-8 teams on Saturday. It’s been a topsy-turvy season with both teams. On Sunday, the Steelers were able to pin a 24-16 win on the Panthers on the road, now returning home to take on the Raiders, fresh off a memorable 30-24 win over the Patriots when an ill-conceived final play in regulation time of a tied game led to a defensive TD for the Raiders, who snuck out of there with the win. Now on the road in Pittsburgh, they look to close the season strong. Who can get it done in Pittsburgh this week?

Other than some November games in Denver and Seattle, the Raiders have been more or less insulated from the conditions that can be seen in late-season NFL. This week in the outdoors in Pittsburgh, there might not be much precipitation, but it will be wickedly cold, and on paper, you’d think that would favor Pittsburgh. And the Steelers just look easier than they are lately. You see them juggling quarterbacks, none of whom can really take advantage of the talent they have in their pass-catching corps. They have a secondary that can really be duck soup against the more-vital aerial offenses they face, with the Raiders and Davante Adams at least partially fitting that bill.

It’s still fair to say that Pittsburgh’s results seem to surpass what they have on paper. Lately, the “D” has been able to mask its shortcomings against the pass, relying on a strong run-defense and some big-play ability throughout the defense to make life hard on opposing offenses. Over the past month, it’s hard to argue with the results or the consistency. Last week was oddly the third straight week they allowed just 16 points, which followed a game where they allowed 17. So while the Raiders offer some different offensive angles their recent opponents lacked, Las Vegas will still be coming into a cold place to face a defense that has really been showing its fangs lately.

Issues for the Raiders

They’ve won four of their last five games, which followed a rotten spell of putrid performances where gigantic leads were blown, and the Raiders always seemed to find a way to undermine themselves. To see them winning games late with two OT wins and last week’s dramatic win in this latest stretch is borderline crazy. They’re really a strange study, able to flip things on a dime like that when it looked like they were heading right into the drain. The problem this season with the Raiders is that positive expectations normally carry more water when things are going bad. Expecting good things to continue with this bunch has cost people a lot of money this season.

For all the Raiders’ issues, they retain a high level of offensive potential. With Joshua Jacobs having a big year and now getting guys back in rotation aerially to help Adams, their firepower can’t be dismissed. In some games, it’s going to be enough. They just have too much juice between Jacobs getting the run-game rolling and all the targets Derek Carr can exploit. There’s a flip side to that, where the Raiders’ offense inexplicably slows to a crawl and maybe the strong and impactful Steelers’ front can help bring that about in the cold this week.

If the Steelers’ defense isn’t able to put a wet blanket on the Raiders this week, the question becomes what to do with the Steelers’ offense. Can they be relied upon for production in this spot? The Raiders have been less that rigid on defense for much of the season, and unlike the Steelers, the prospects of game-changing plays on “D” are not great. They can rush the passer a little bit, and that might go a long way this week, but otherwise, they haven’t been very impactful. We’ll have to see what direction the Steelers go in at QB, with previous starter Kenny Pickett scheduled to be ready after a concussion two weeks ago.

It’s just that the Steelers haven’t really shown that they are able to take advantage of a nice aerial package, with a good rookie receiver in George Pickens, a productive tight end in Pat Freiermuth, and Diontae Johnson. Against the porous Raiders’ secondary, one would think this is a spot to pounce, but with this offense, it’s not a guarantee. Still, you’d think they’d be able to get some business done. They haven’t been getting a ton from Najee Harris overall, but he’s shown signs of waking up lately, and their other backs could do damage against a Raiders’ run-defense that isn’t terribly strong, either. It’s just that if you’re backing Pittsburgh here, you’re really banking on home-field advantage, a down day from the Vegas offense, and some pop from a Steelers’ offense that doesn’t always provide it.

This is a game where getting a real read on what will occur is more of a guessing game than in other spots around the league. It’s just when going through the different permutations of what might occur; the mind can’t help but go back to the Raiders’ offense. It also goes to a certain mojo they’ve latched onto, not dissimilar to last season’s, where they made that unlikely playoff push. It’s almost more impressive this season amidst the wretched form they showed at points. Either way, in a game that could shake out a number of ways, I’ll opt for the greater spark on the Raiders offense to carry the day and get the cover on Saturday in the Steel City.

Loot’s Prediction to Cover the Point Spread: I’m betting on the Las Vegas Raiders plus 3 points. Bet your NFL picks for FREE this week by scoring a 50% real cash bonus up to $250 in free bets at the best sportsbook on the web! —> Bovada Sportsbook! They pay fast, offer TONS of props and have the BEST live betting platform on the web!