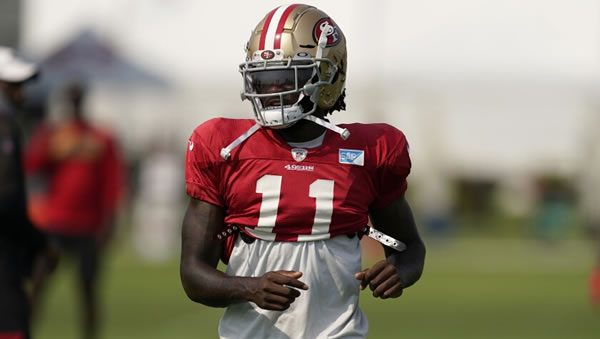 It’s an NFC West Division battle to close out NFL Week 11. Sean McVay brings the Los Angeles Rams up the coast to San Francisco to take on the 49ers on Monday Night Football. Let’s ride with the home dog Niners to cover the number and maybe sneak out an upset. Here are three reasons.

The 49ers Offense Is Getting In Gear

Kyle Shanahan is known as an offensive guru, but the 49er offense has had some drama this year. So while the world tries to figure out when Trey Lance will take over behind center, the offense continues to be efficient. They started the year out hot, then had injuries to both Jimmy Garoppolo and Lance. Injuries have also knocked out tight end George Kittle for multiple weeks in October, but he made it back on the field last week against the Cardinals. SF still ranks top 10 in yards per play despite being middle of the pack in points per game. They are averaging almost two turnovers per game that is killing them this year. Last week they lost two fumbles in the first half that put them behind the eight ball before the game got going. SF has also been anemic on third down, ranking 30th in the league and converting less than one-third of their opportunities. There should be some positive regression coming for the Niners in these two categories. SF has been getting Brandon Aiyuk more involved the past couple of weeks, so though it wasn’t pretty last week, the offense is looking better.

The Rams defense is a classic group of stars and scrubs. They definitely have the best defensive player in the league in Tackle Aaron Donald and may have the second-best in cornerback Jalen Ramsey. Von Miller joined the team last week but couldn’t get on the field due to an ankle injury. He should be on the field this week. But the Rams defense, top to bottom, has weaknesses. Shanahan and the Niners will focus on moving the ball on the ground where the Rams allow 4.4 yards per carry. The Rams are also middle of the pack in passing yards allowed per attempt, so if SF can keep Jimmy G upright, they should have some success. The Rams lead the league in sacks, but SF is 5th in sacks allowed, so this will be the key to the SF offense winning this battle. Look for Shanahan to dedicate the offense to protect his QB and work receivers not being covered by Ramsey. Shanahan should be able to orchestrate the offense to move the ball and put points up on the Rams.

SF Will Have to Slow Down the Ram Offense

Sean McVay’s offense has been rolling in 2021, ranking in the top 3 in points, yards per play, and passing yards per attempt. QB Matt Stafford has been running McVay’s offense with precision, spreading the ball to Cooper Cupp and Robert Woods while Darrell Henderson moves the ball on the ground. The Rams are putting up big numbers, but this week will be another big challenge after their O-line was overrun last week by the Titan. Their last four opponents have been bottom ten defenses in the league. This week the Niners are a middle-of-the-pack defense, but they get up for this division contest, and the middle of their D-Line can cause the same issues the Titans did. Stafford has never excelled in big games, and though he did well earlier in the year against the Bucs, he laid an egg in the Rams division game with the Cardinals, and again last week. I’m not sure Stafford can be trusted yet.
Shanahan and Defensive Coordinator DeMeco Ryans will look for a way to slow down the Ram attack. Their primary method will be to keep the ball out of his hands by running the ball when the SF offense is on the field. Nick Bosa and Arik Armstead will have to come out on fire and make Stafford uncomfortable, especially on the play-action passes that have been a staple of McVay’s offense. Stafford was sacked five times last week, look for SF to dial up some pressure to keep Stafford off balance. I expect the 49er defense to come to play this week and hold the Rams in check.

The Niners Have the Rams Number

Niners coach Kyle Shanahan and McVay are from the same offensive school, so they know what each other likes to do. Though these teams have been competitive over the past couple of years, SF has outright won the last four games. Last year the Niners dominated the Rams in SF early in the year, then won on a walk-off field goal in late November with Nick Mullens at quarterback. SF controlled the ball and time of possession in both of those games and will look to do the same this week. San Fran is coming off an embarrassing loss last week at home against the Cardinals, so there is some extra value with SF. The look-ahead line in this game was LA -3, but now the line is inching up even with the dud the Rams put on tape last week. The line implies that if this game were in LA, the Rams would be 8 or 9 point favorites. As an underdog, Shanahan is 23-17 ATS, while the Rams are only 3-5 as favorites this year.

Look for San Francisco to bring their A-game as they face their arch-rival. They were embarrassed last week, which should fire them up against the Rams on Monday Night Football. Play the 49ers plus the points. Helpful Note: Many football bettors (basketball too) aren’t aware that they could be laying -105 odds instead of -110! It doesn’t sound like much, but it adds up to a TON of money you could be saving and spending on beer or pay your wife off so you can watch more football lol! Stop wasting your hard earned money and start saving HUGE today by making the switch to BetAnySports Sportsbook!