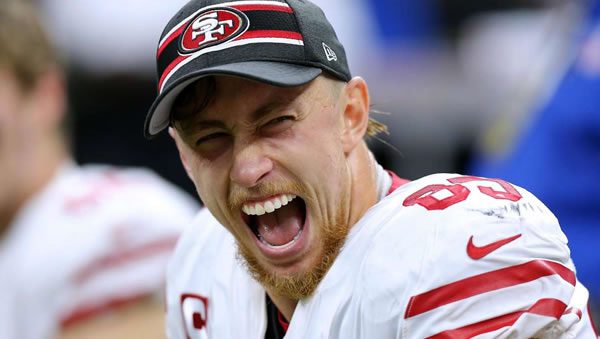 After a four-game losing streak early in the season, the San Francisco 49ers have climbed their way back to the .500 mark after winning 3 of the last four games. The 49ers most recent victory was produced by a dominant defensive effort in a 30-10 win over the Jaguars in Jacksonville last week. On Sunday, the 49ers will have a chance to keep their momentum alive when they host the Minnesota Vikings at Levi’s Stadium. Like the 49ers, the Vikings also climbed back to the .500 mark with a surprising clutch victory over the Packers. Believe it or not, both the Vikings and the 49ers are still alive in the NFC Wild Card Playoff race, which will add some extra purpose to Sunday’s match-up in Santa Clara.

Despite the dominant defensive performance last week, the 49ers are still battling injury concerns, especially in the offensive backfield with running backs Elijah Mitchell and JaMycal Hasty still nursing injuries. Both Mitchell and Hasty were absent from the week 11 win over Jacksonville. Jeff Wilson Jr took the lead role of the backfield, but the 49ers offense actually turned to star rookie WR Deebo Samuel to help provide a spark in the rushing game. Samuel rushed eight times for 79 yards with a touchdown to keep the 49ers run eccentric offense intact. Luckily for the 49ers, Elijah Mitchell is expected to return to his starting role this week, and the 49ers will need all of their weapons against a Vikings team that knows how to produce points.

More Picks: Get the money with Loot’s Chargers at Broncos Predicted Spread Winner >>>

In recent weeks, the Vikings offense has come alive in a big way. Perhaps being healthy for the first time in weeks has something to do with the uptick in production. RB Dalvin Cook has returned to the lineup and has been very effective, which has likely opened things up for the passing attack. WR Justin Jefferson has been unstoppable, bringing in 17 receptions for more than 300 yards with two touchdowns in the last two performances. The balance between the run-heavy offense and opportunistic passing game from the Vikings is going to present challenges for the 49ers defense that has been most vulnerable in stopping the run this season.

While I believe the match-up favors the Vikings to a certain degree, Minnesota’s defense has hardly been reliable this season. The Vikings defense is among the league’s worst against the run, yielding 127 yards per game, and they have not exactly been great defending the pass either, allowing 257 yards per game. Purely from a match-up and scheme standpoint, I don’t see the Vikings having many answers for WR Deebo Samuel and TE George Kittle. Those match-ups are only worrisome if the Vikings find a way to stop the 49ers rushing attack. Simply put, I think this is a very advantageous match-up for both offenses, and I would not be surprised to see a back and forth affair.

Jay’s Pick: I really like the over 48.5 in this match-up as I believe both offenses will have a significant advantage. Take the over 48.5. Question: When you bet on games, are you laying -110 (or more)? If so, you’re overpaying for odds! You work hard for your money! Don’t waste it! Make the switch today to -105 at BetAnySports! You’ll be so glad you did!