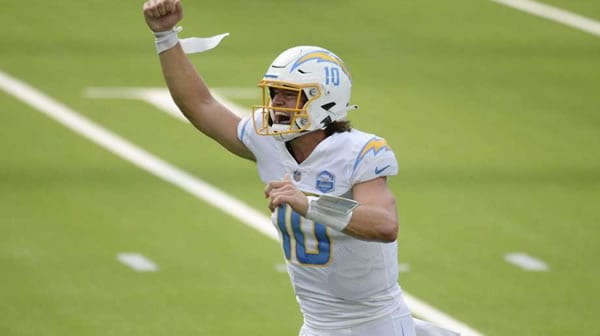 If the virus doesn’t get you, the hurricane might! I’m not sure there could be a bigger figurative or literal storm ahead of the LA Chargers and New Orleans Saints matchup, but it looks like we will at least have a game come Monday Night. The Saints petitioned to have fans for the Monday Night Football contest, but that request was denied in part due to the potential impact of Hurricane Delta. Relocation to Indianapolis was on the table, but as of Wednesday night, the thought was that evacuation would be unnecessary for the immediate New Orleans area, and the Saints will get a true home game, even if the Superdome will again be near silent. Both teams are battling injuries to key contributors, and rookie QB Justin Herbert looks to take on another all-timer in Drew Brees a week after going toe-to-toe with Tom Brady.

Quarterbacks are important in looking at trends, so keep that in mind as Herbert was only involved in the last three games, but LA enters the week with three ATS wins in their previous four games on the road, and nine ATS wins in their fourteen as the underdog. The Chargers are 0-3-1 against the spread in the last four on Monday Night, but the Saints are sporting a negative trend there as well with a 2-6 ATS record in the previous eight on MNF. New Orleans is 20-8 ATS over the last few seasons when playing an opponent with a record below .500, and they are 13-6 ATS in their previous 19 games overall. The Over has paid in all four New Orleans games in 2020, and the Over is 6-2 in the last eight Saints games on Monday Night. The public is nearly split on this one with 52% of the bets coming in on the Chargers side, but the direction seems clear with the total as 77% of bets have been on the Over through the midweek betting period.

Who is Hurting Worse?

It has been a wild year on the injury front for many NFL teams, and both of these clubs have notable names on the injury list for this week. LA is battling a rash of injuries on the offensive line with Bryan Bulaga, Trai Turner, and Storm Norton, all listed as questionable. Running back Austin Ekeler is out until November with knee and hamstring issues, leaving Josh Kelley and Justin Jackson to run against the 7th ranked Saints run defense. Kelley is averaging 3.3 yards as the primary backup, with Jackson seeing just eight carries so far. Both will need to step up to fill the shoes of the do-it-all Ekeler and keep some pressure off of Herbert’s shoulders. That is, if Herbert is again under center as Anthony Lynn hasn’t committed to a starter for Monday with Tyrod Taylor nearing a return from a punctured lung. Herbert has lost each of his three starts but is averaging 310 yards passing yards per game should be the presumed starter until Tyrod is 100%. New Orleans has been without WR Michael Thomas since early in Week 1, and while he gets an extra day to prepare this week, the Saints have the bye next week and could shelf Thomas again in favor of having him 100% for Week 7 and beyond. Jared Cook is questionable with a groin injury, but it looks like Tre’Quan Smith and Manny Sanders have found enough of a rhythm with Brees to keep the Saints firmly in the top-10 in scoring at 30.8 points per game. Marshon Lattimore is questionable with a hamstring, and OL Ryan Ramczyk is in the concussion protocol. Both are ProBowl caliber players that are tough to replace if they do miss this contest. New Orleans is probably in a little better shape, considering they have been without Thomas for a while, and it hasn’t hurt them tremendously, but the volume of injuries is concerning when they are giving up that 7.5 points.

After a Week 1 win against Cincinnati, LA found itself pushing their rookie QB into service, and he has not looked like a first-year player at all, throwing for 930 yards and five touchdowns in three games. All three starts resulted in losses, but each game was decided by seven points or fewer, including a three-point OT decision against Kansas City. The offense is 6th overall at 400 total yards per game, but there is some inefficiency, and the scoring drops to 27th in the league at 20.8 points per game. The Chargers have committed seven turnovers and sit minus-4 in differential and could be 2-2 or better if that stat was better. Keenan Allen has remained the #1 receiving option, although he has done mostly underneath work with just a 10.2 yards per catch average on 32 receptions. Hunter Henry is second on the team at 245 receiving yards, and there isn’t much beyond that, especially now that Ekeler, who was third on the team, is out. New Orleans is 25th in points allowed, but they are quite a bit better in the yardage categories, so Herbert, or perhaps Taylor, will have a big job on their hands to not let the Saints offense get too far ahead.

Outside of several standout QB performances in 2020, Alvin Kamara has a good case for Offensive Player of the Year with 657 yards and seven touchdowns through four games. He has done most of the heavy lifting in the absence of Michael Thomas but has been buoyed by Latavius Murray, who has added 229 yards and two scores in relief to give New Orleans a juggernaut backfield. Drew Brees is back north of 70% completions and enters the week with a 108 rating on eight touchdowns against two interceptions, and there has generally been plenty of offense as the Saints have failed to hit 30 points on just one occasion. Taysom Hill hasn’t found the endzone while chipping in with 94 all-purpose yards, but the Saints continue to put the ball in his hands, so it seems just a matter of time before he is responsible for a big play. The New Orleans defense has been good at times but never overwhelming, although they have allowed just 3.6 yards per carry, good for 6th in the league. They fall to 27th in third-down conversions allowed and are often on the field for too long to avoid fatigue. They catch a break here with Ekeler out, considering that so much of the LA offense runs through the versatile back.

Lay the Points and Take the Home Team

I am assuming Herbert starts, and while he looks better than his experience would suggest, I still like the veteran Brees, so decent advantage to NO there. The Saints have a large edge in the playmaker department with Kamara on a roll, and LAC is now trying to figure out where Ekeler’s touches will go. I’m not sure how the Chargers score enough points to keep up with a Saints team that is a good bet to hit the 30-point plateau at home. It was certainly fun seeing Herbert trade punches with Brady last week, but the Bucs were able to methodically cut apart the Chargers defense, and New Orleans can do so many of the same things. Brees isn’t giving the ball up or getting sacked a bunch either, so there will be few short fields for the Chargers, and while the dome will be quiet, it will still prove unfriendly as the Saints get a 33-23 win.

Ted Walker’s Pick to Cover the Spread: New Orleans. Bet your MNF pick and all your Week 6 NFL picks FREE by taking advantage of a 100% real cash bonus on your first deposit of $100 to $300 at MyBookie Sportsbook! (Credit cards work there!)