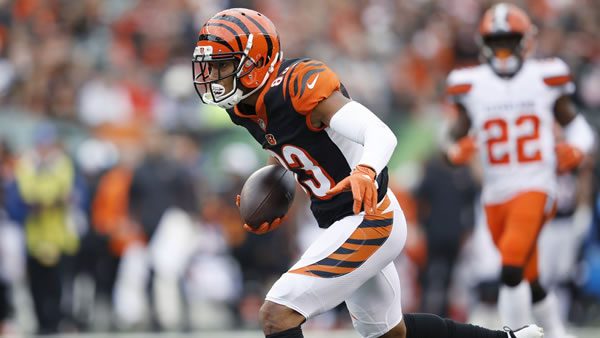 The AFC North race is heating up with Baltimore and Cincinnati taking their predicted place at the top of the division. The Bengals are in Cleveland on Halloween with a chance to put even more distance between themselves and the Browns. Cleveland swept this series last season and has won seven of the last eight against Cincinnati but enter Week 8 having lost four straight while the Bengals are riding a two-game winning streak. Cleveland has been able to keep in close with four of their five losses coming by three points or fewer. The underdog has won each of the last five against the spread.

After losing their first two games, Cincinnati has won four of the last five and is showing signs of what we saw toward the end of last season as they won the conference. The offense is 11th in total yards with a top-5 passing game leading to 24.7 points per game, good for 8th in the NFL. Joe Burrow has thrown for 781 yards in the last two games alone and his 2,097 yards on the season is the second-highest total in the league. Burrow has 15 touchdown passes on the season with six scores going to Ja’Marr Chase (47-605-6) who leads the team in every receiving category. Tyler Boyd and Tee Higgins round out what is arguably the best WR group in the league and that duo has combined for 910 receiving yards and five touchdowns. Joe Mixon is averaging just 3.3 yards per tote and the Bengals are just 28th in rushing yards per game but they will get to work against the Browns 24th ranked run defense. The Bengals defense is firmly in the top-10 in scoring defense, allowing 18.9 points per game and their passing defense is giving up 202 yards per game, good for 9th overall. This is not a big play defense at just 1.7 sacks per game and a dead-even turnover differential but Vonn Bell has three interceptions to lead the team.

Close, but Not Quite

Cleveland fans probably have it worse than most this season in terms of heartbreaking losses. The Browns came up three point short in Baltimore last week after falling behind by ten on multiple occasions and it was a similar script a few weeks earlier in a three point loss to Atlanta. Cleveland can keep things close with the third-best run game in the league but they appear a few playmakers short of getting over the hill. They will be without their receptions leader this week as TE David Njoku is scheduled to miss multiple games with a high ankle sprain. Jacoby Brissett has been a level-headed signal caller but the passing offense is putting up just 214 yards per game. Nick Chubb is the NFL leader at 740 rushing yards and also leads all backs with eight touchdowns and eight runs of at least 20 yards. The run game averages 163 yards per game and is a big reason why the Browns are putting up 24 points per game despite the second-fewest passing touchdowns. Amari Cooper (34-422-4) leads the team in all receiving categories with Donovan Peoples-Jones the only other pass catcher with at least 20 receptions now that Njoku is sidelined. The Browns defense is right at the league average in total yards allowed but they are bottom-10 in rushing defense, takeaways and 4th-worst in scoring, giving up 26.6 points per game. Myles Garrett leads the team with six sacks but the team has generated just twelve sacks overall and two interceptions.

Bengals Grind Out a Cover

AFC North games just feel like a fist-fight and this one should fit that bill, especially on Monday Night Football. Cleveland has fought harder and seen success in recent years but they are a few playmakers short against Burrow and his receiving options. Cleveland can keep it close and control the clock with Chubb but Cincinnati doesn’t need to win time of possession to score a bunch and just keeping it close hasn’t worked out well for the Browns so far. Jacoby Brissett is a fine game manager but he isn’t likely to make enough plays if Cincinnati can get a lead and get Cleveland away from the running game. The Bengals showed they can jump out to a quick lead last week and they do so again against the Browns. Cleveland knows how to claw back but it’s going to be too steep of a hill this time around and Cincinnati gets the 26-19 win.

Pick to Cover the Spread: Cincinnati. Update: Chase has been ruled out but we still like the Bengals to win and cover.