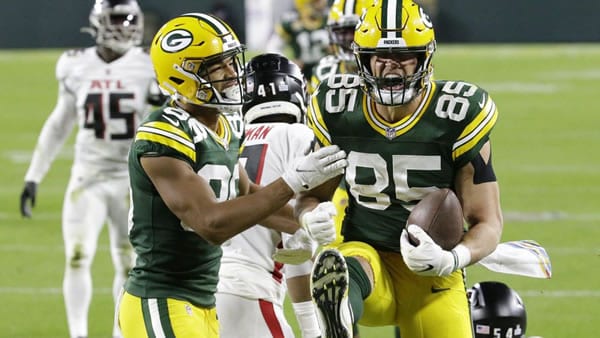 We revisit the days of the old NFC Central Division as Green Bay heads south to take on the Tampa Bay Buccaneers. These two faced off twice a season between 1970 and 2001 but have met just three times since the 2011 season, with the last meeting coming in 2017. The Aaron Rodgers-Tom Brady battle will dominate the storylines surrounding this game, but this one could come down to role-players as both teams deal with injuries to significant name contributors. Green Bay does bring the NFL’s best scoring offense to town to tangle with the 2nd best defense in terms of yards allowed. Styles make fights, and Big-O v. Big-D is usually a recipe for a good game.

It doesn’t happen every week, but there are a few games every season that see some wild betting activity before settling in. This game opened with Tampa a 2-point favorite in many places, but that spread was bet all the way to Tampa +2 by Tuesday on DraftKings, for example. That lasted about a day, and now the Bucs are +1 at DK and most of the other online betting sites. It has been near-universal that the line quickly moved about four points from the open but leveled, and things are about as stable as they have been as we exit Wednesday night. At minus-one, Green Bay is seeing about 69% of the bets, which is no surprise given how popular the Packers are with the public. There also must be plenty of believers that Green Bay can come close to its average of 38 points per game as 76% of bets have come in on the side of the Over through midweek.

Injuries have been a story for many NFL teams in 2020, and Tampa Bay could be in for a rough patch with several vital players carrying a questionable tag ahead of Sunday. Mike Evans, Chris Godwin, and Scott Miller are the top three options for Brady at wide receiver, but all are battling ailments. Godwin has missed two games with a hamstring but made it back to limited practice this week, as did Miller, who is dealing with hip and groin injuries. Mike Evans leads the team in catches, yards, and touchdowns despite a bad ankle, but he did not see the practice field Wednesday, and it is unclear if he will finally miss time after limping through portions of the last few games. Look for rookie Tyler Johnson to fill in if any of the WRs are unable to go. He put up a 4-61 line last week in relief. Rob Gronkowski and Leonard Fournette are also banged-up but are trending in the right direction. The Bucs can probably do without Gronk as O.J. Howard and Cam Brate have hauled in a combined 193 yards and three scores, but having Fournette (5.1 YPC) may be more valuable as Tampa tries to play keep away from Rodgers. That TB defense has been aces in 2020, but they could be without Jason Pierre-Paul and Levonte David on Sunday. David leads the team with 28 tackles, and JPP paces the defense with four sacks.

Brady has put up twelve touchdowns and a 96.8 rating since taking the helm of the pirate ship, but he has also thrown some bad interceptions and needs his playmakers, especially if he is tasked with keeping up with a top-flight opponent.

It has been a walk-in-the-park for Green Bay so far as their closest margin of victory has been seven points, and they are now a bit fresher coming off a bye week. That time off was important in getting Davante Adams over his hamstring issue and gave GB a chance to assess how they plan to cover the loss of Allen Lazard, who came on to lead the team in receiving as Adams missed time. The Packers have yet to turn the ball over this season, and Rodgers is in full MVP-mode while hitting on 70% of his passes for a 128.4 rating. Aaron Jones is defying the laws of statistical regression with six total touchdowns through four games, and it seems this offense has a new weapon with TE Robert Tonyan emerging to lead the team with five touchdown receptions. Green Bay leads the league in time of possession, sacks allowed and is 4th in third-down conversions. There may be flashier offenses, but none are more efficient than GB right now. The Packers defense is rather average, but that has been enough considering the offensive output. They are not getting many takeaways, so teams have been able to move the ball well against them with both the run and the pass, but there have been just enough stops to hand the ball back over to Rodgers. Z’Darius Smith leads the team with five sacks, and the pass-rush in general benefits from playing with a lead. CBs Jaire Alexander and Kevin King are listed as questionable for Sunday, although Alexander is on track after seeing a limited practice session on Wednesday.

Packers Cover and Move to 5-0

Lost in all the Brady hoopla has been the performance of the Bucs defense. They have six interceptions, nine total takeaways, and seven different defenders have recorded at least two sacks. Those are great numbers, but Green Bay has done a better job this season of keeping Rodgers upright, and that guy just doesn’t turn the ball over. Rodgers is the only QB to reach 300 passing touchdowns with fewer than 100 interceptions, and he is almost surely going to reach 400 TDs before hitting that 100 INT mark. In fact, with a 4.49 TD-to-INT ratio, it will be right around 450 scores before he hits the century mark for interceptions. The Bucs are allowing just 2.7 yards per carry, but I think Green Bay can win without a strong commitment to the run, and the Aaron Jones/Jamaal Williams RB tandem has proven to be dangerous in the receiving game if the yards on the ground are hard to come by. At full health, I would list Tampa as one of the few teams that could give GB trouble all day and win one of those last-team-with-the-ball games, but there are too many question marks on who is or isn’t suiting up for the Bucs. Even if most do see the field, they clearly aren’t 100%, and it will take a near-perfect game to get the win here. I’m looking for a 17-13 lead for Green Bay at the half with some steady pull away en route to a 33-26 win.

Ted Walker’s Pick to Cover the Spread: Green Bay. Note: With 5Dimes leaving the USA market, many football bettors are bitter over losing the ability to bet on sides and totals at -105 odds. Did you know that there are still a couple of other GOOD/TRUSTWORTHY bookies out there that offer -105 reduced odds? Get your reduced odds back TODAY by signing up at BetAnySports!