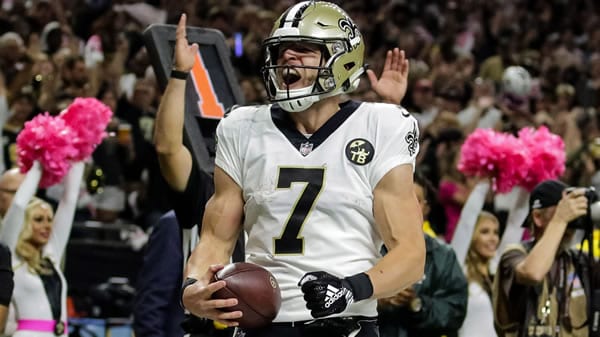 The New Orleans Saints come to Ford Field to take on the Detroit Lions on Sunday in this battle of 1-2 teams. The Saints could use a positive development after dropping their second in a row last Sunday, suffering a 37-30 loss to the Green Bay Packers. Sunday went a lot better for the Lions, who earned their first win of the season with a big 26-23 win over the Arizona Cardinals on Sunday. They were finally able to close a game strongly and beat a 2-0 team on the road to pump some wind in their sails. Who can get the cover in the motor-city on Sunday?

Looking at the Lions a Different Way

It really doesn’t change Detroit’s overall station in life to beat Arizona. It was a nice win, but they still have a long road back to the ranks of respectability. And the way that they blew double-digit leads in their first two games was alarming. That sort of lack of mental toughness they showed in the first few weeks had a lot of people thinking head coach Matt Patricia could become the first casualty of the season. The aerial attack of Matthew Stafford has been lukewarm, the run game again underachieving, with a defense that couldn’t stop the run. And on top of that, they folded late—the worst type of team to bet on.

But what if you look at it a different way and figure they were at least good enough to build nice leads in their first two games, one of those coming against a really strong Packers’ team? Many people were painting a 2-0 Cardinals’ team as a potential rising contender, and the Lions beat them on the road. Sure, they ended up flopping and not covering the spread in weeks one and two. But if you look at what led up to that, along with Sunday’s win, it’s at least possible that we could find Detroit in some good-value spots in upcoming weeks.

The Power of Urgency

While beating the Packers would have made New Orleans appear to be more-formidable, it’s probably worse for Detroit that they lost. At 1-2 and everything positioned for a big run this season, we could see a ramped-up mentality in this game for the Saints. The last two weeks were difficult spots for the Saints. Playing the Raiders in their Vegas debut, then hosting one of the premier teams in the NFC. Playing Detroit could give way to a new-look Saints, even in this road-setting. Usually, Drew Brees reacts well in these cases of midseason crises, where the Saints really need a win before things get away from them. Either way, what would normally loom as simply a road-game in Detroit now takes on a different vibe with the 1-2 start.

However, that goes both ways, however, as this isn’t all about New Orleans and their dreams. There are a lot of prideful professionals on the Detroit sideline—players and coaches alike. A lot is on the line for them too, as this is really a fork-in-the-road moment for them, as well. To beat New Orleans would deposit them in a position that would be so much better than where they were right after so graphically blowing the first two games. It would really represent a potential turning point for the team. It would throw a whole different light on their season, and after what they did in Arizona, I’m not so sure I’m ready to write off their ability to respond to that type of opportunity.

An off-key Arizona offense fell victim to the previously-dormant Detroit defensive playmaking on Sunday, with rookie Jeff Okudah getting a pick with a nice return, along with former Patriots Jamie Collins and Duron Harmon also picking off Kyler Murray on the day. And for once, they were able to keep the opposing run contained, as Murray and Kenyan Drake were kept relatively in check. That could change against a revved-up Saints crew. Even with the Saints and Drew Brees not necessarily in top-form, they still scored 30 on Green Bay. We’ll keep an eye on receiver Michael Thomas’ status leading up to this game, as his absence has really hurt New Orleans. But there are still a lot of weapons, like a heating-up Alvin Kamara, who could do a lot of damage on a Detroit “D” where the jury is still definitely out.

The Saints giving up 71 combined points in their last two games offers hope to the Lions. Still, the Saints are pretty tough against the run, with an attacking front-seven that will test a Detroit O-line that has a few dicey areas. Still, we saw how much better the offense looked with Kenny Golladay back in the mix after missing the first two games. With rising tight end TJ Hockenson, Marvin Jones, shifty rookie, D’Andre Swift, Kerryon Johnson, and a still-productive Adrian Peterson, there are some weapons. But after the last few weeks, there will be a lot of emphasis on “D” leading up to game-time for the Saints. The Lions have been in the 20’s with their scoring so far and will likely need to see that number swell to be in this one.

I imagine even if Thomas were to return, with his status really unknown as of press time, he wouldn’t be at full-power. And ignoring the effects of his absence on the Saints’ offense is like ignoring a festering wound, hoping it just goes away. But the fact is, whether it’s due to Thomas’ absence or not, the Saints aren’t really in good form. That could be just a big enough crease for Detroit to hang in this one and get the cover at home. I’m taking the Lions.

Loot’s Prediction to Cover the Point Spread: I’m betting on the Detroit Lions plus 4 points. Note: 5Dimes has left the U.S. betting market. Did you know that you can still bet on games at -105 elsewhere? Yes! Find this sweet feature at BetAnySports! Same easy to naviate website/platform/wagering menu too!