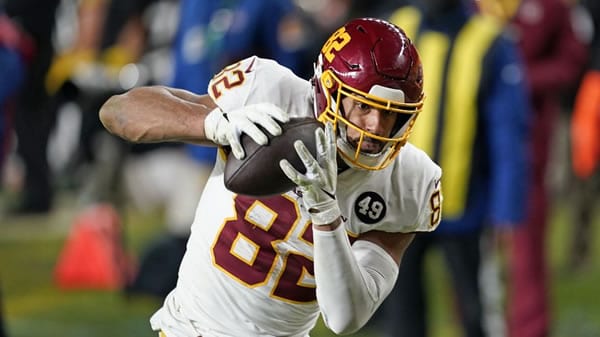 The Seattle Seahawks come to FedEx Field for a Week 15 NFC matchup with Washington on Sunday. Seattle had it easy on Sunday, drubbing the hapless Jets, 40-3. It was still a positive development for a Seattle team that fell on hard times the last few weeks. Washington is cruising nicely now, winning their fourth in a row on Sunday with a 23-15 win over the 49ers on the road. Their surge has allowed them to take control of the NFC East, even at just 6-7. Both teams have a lot to play for, so who can get it done in Landover on Sunday?

Just As Things Looked So Good…

A nice story was developing with come-backing Alex Smith leading Washington to the division lead, but a hurt leg forced him to leave the last game, with Dwayne Haskins coming in to fill in and doing well enough to keep his team in front. Watching Haskins play through parts of the last two seasons, however, would cause one not to be that optimistic about the prospects of him starting. And it’s not official that Smith won’t be in there, but given his history, one could maybe assume.

Still, it isn’t really stellar QB play that allowed Washington to go on this surge and take over the NFC East. Smith’s steely leadership and presence were key, but it’s not as if he was lighting it up, either. Perhaps Haskins can step in and keep this machine rolling. Between versatile JD McKissic and Peyton Barber, they can run the ball pretty well and even more so if Antonio Gibson gets back in there. There are aerial weapons with Terry McLaurin, blossoming TE Logan Thomas, and a slew of role guys who can jump up and make things happen.

What Makes Washington a Real Threat

Over the last handful of weeks, we see a Washington defense that is becoming an increasingly-bigger thorn in the sides of opposing offenses. And they are getting a lot of swagger and confidence. On Sunday, Kamren Curl returned a pick for a TD, while top draft pick Chase Young continued his growth, taking a fumble back for a touchdown on Sunday, as well. That defensive line is a monster, both robust and able to apply pressure. And against the Seattle offensive line, this looms as a major matchup component in the Redskins’ favor.

With Montez Sweat, Young, Daron Payne, and Jonathan Allen, that front has controlled games on occasions, and they can really make life hard on opposing offensive lines that don’t have their act together. But there is no relief in the back, and with Ronald Darby, Kendall Fuller, Deshazor Everett, and Curl, Washington has one of the best pass defenses in the game. And for this defense to achieve these levels with an offense that often leaves them out to dry just adds another layer of venom with this group. Ron Rivera has really seen some of his moves pay off well, as this “D” has the makings of one of his best yet.

What Seattle Brings to the Table

The trajectory of the Seattle season makes them a difficult team to make a proper evaluation. There have been issues since a fast start to the season, and Washington is undoubtedly the hotter team as we speak. Offensive fireworks of a record-breaking nature characterized their early work, along with a defense that was almost as bad as the offense was good. We saw the defense start to improve, but that was accompanied by an offensive sag, and next thing you know—Seattle was winning some and losing some. They are 4-4 in their last 8, finding the formula for success more-elusive to capture in recent weeks.

Sunday was a positive development for Seattle, though when you pile on against the Jets, what does it really mean? We will now see if what we saw was a case of their offense getting it together or just the opponent being really bad. Whatever the case, for Seattle to go far this season, the offense has to recapture its former fire. Russell Wilson looked good on Sunday, connecting well with Tyler Lockett and DK Metcalf, with Chris Carson and Carlos Hyde running the ball well. Wilson threw four touchdowns and brought in a lot of guys to chip in on an offense that really has a lot of depth. But a common theme on this team is whether the O-line can hold up so Wilson can get the most out of this offense.

But it’s still a mixed bag. Maybe the thrilling offense and leaky defense equation was actually getting better results, but it was never going to happen for the Seahawks with the “D” playing that poorly. The offense can always come around. But the “D” needed to get better. In the past five games, they have allowed a total of 81 points. The pass-rush has kicked up a notch or two, while a pass-defense that was playing historically-bad has really turned it around.

Go With the Home Dog

I think Washington is for real, a team that was on its back that has really turned things around and is now flashing a defense that is playing as good as any unit in the conference. I don’t even think you necessarily need to be down on Seattle to justify a Washington pick in this game. I just think the greater stoutness and playmaking of the Washington defense looms as a major factor. In a game where points might not be that easy to come by, I’ll take Washington and the points.

Loot’s Prediction to Cover the Point Spread: I’m betting on Washington plus 5 points.