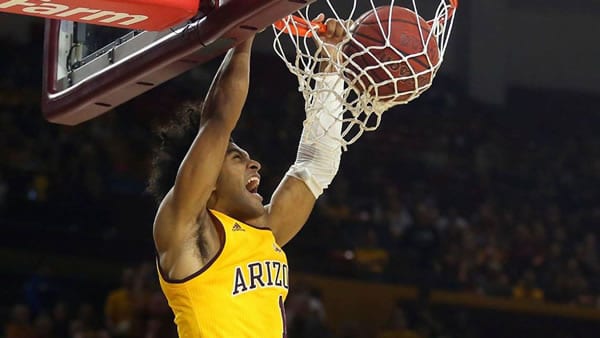 It’s rare to see Arizona flying under the radar, but with the Pac-12 mostly down outside of UCLA and Oregon and USC getting a fair amount of attention, Arizona is almost an afterthought in this league. The Wildcats haven’t been bad by any means, but after taking a pair of losses to USC and UCLA at home, it looks pretty unlikely that they’re going to be in the mix for anything regarding the conference.

Still, the Wildcats are much better off than Arizona State, which has been through its own scheduling and is sitting on a 4-6 start that has the Sun Devils just one spot away from falling to the bottom of the Pac-12 standings. Arizona State could easily have picked up a pair of wins in its first three games in the league, but failing to control the game down the stretch has been the Sun Devils’ undoing. Can Arizona take advantage of a team that’s not playing its best, or can the Sun Devils pull the surprise?

Playing without Jemarl Baker and his 12 points per game might seem daunting for most teams, but Arizona might actually turn out better this way. Baker hadn’t been doing much scoring in the games before the Oregon State win, so losing him to a broken wrist probably won’t damage the Wildcats as much as it could have.

Where Arizona could have a significant advantage is down low. The Wildcats are the best offen-sive rebounding team in the Pac-12, while the Sun Devils are the weakest in the league on the glass. Arizona likes to rely on James Akinjo for most of its offense, but in this game, Azuolas Tubelis and Jordan Brown are much more likely to play a big role in getting the job done. The Wildcats have a big edge if they’re willing to use it, and if they do, they should be in control from start to finish. Brown scored 25 points at Oregon State, and a similar performance here would be huge.

When I think about Arizona State’s style, I’m reminded of the One More Girl song; Run, Run, Run. Here’s another thing to remember about the Sun Devils: they’ve proven to be really bad at meeting expectations. Arizona State was supposed to be a much better team this year, especial-ly after giving Villanova a quality battle early in the season, but the same old problems are rearing their heads again for Bobby Hurley’s team.

For one thing, Arizona State keeps letting games slip away in the final few minutes, as hap-pened on its trip to Oregon State. The Sun Devils held a one-point lead with 11 seconds to go, only to fail to play defense on the final possession and hand the Beavers a win. Beyond that, Ar-izona State is a really weak 3-point shooting team. The Sun Devils shoot just 31 percent from the arc, and the two best ASU scorers, Remy Martin and Josh Christopher, both shoot under 25 percent from the arc.

What Arizona State does do well is take care of the basketball, as the Sun Devils had just four turnovers at Oregon State. But when you’re not hitting your deep shots, a lack of turnovers just means that your shooting percentage decreases.

Schedule issues. Because of Oregon getting COVID, both of these teams have been waiting around for their next game, as they were both only able to play Oregon State on their trip to the Beaver State. Arizona’s been sitting around for a week, which has been somewhat problematic for the Wildcats this season in previous situations. They’ve gone a week without playing twice, and each time, they followed with a below-average performance, losing by 3 to Stanford and barely escaping Eastern Washington.

Arizona State is in more of a normal situation after getting only five days off since facing Ore-gon State, but the Sun Devils have only played three games in January and haven’t really had much of a chance to get any kind of momentum. For them, the challenge is getting used to playing regularly, which they haven’t really done to this point on the schedule.

The Wildcats can avoid the Tempe trap. In each of the past two years, something weird has happened to Arizona when it’s come to ASU. Two years ago, Remy Martin torched the Wildcats for 31 points, and the Sun Devils shot 55.6 percent from the floor, and Arizona blew the game with 18 turnovers last season. The Wildcats have to play their game and make sure to get a re-sult.

Arizona State will Cover If:

The Sun Devils can avoid getting blasted on the glass. With its forwards and center Christian Koloko down low, the Wildcats have the ability to pound away at the Sun Devils all game long. Arizona State has to find a way to keep Arizona from dominating the rebounding battle. If the Sun Devils can keep the margin at single digits, they have a good chance to win. If it’s not close, Arizona will likely win comfortably.

Arizona has appeared the much stronger team as of late, and the fact that the Wildcats have such a massive edge on the glass suggests that the Sun Devils really have their hands full in this matchup. As long as Arizona is smart enough to recognize the mismatch and exploit it, this should be the Wildcats’ game.

I trust Sean Miller to find and exploit defensive holes. Give me Arizona. Bet the game for free by scoring a 50% real cash bonus at the online sportsbook with the BEST live betting platform on the planet and offers FAST same day hassle-free payouts: Bovada! They’re the best at getting credit cards to work for deposits as well!