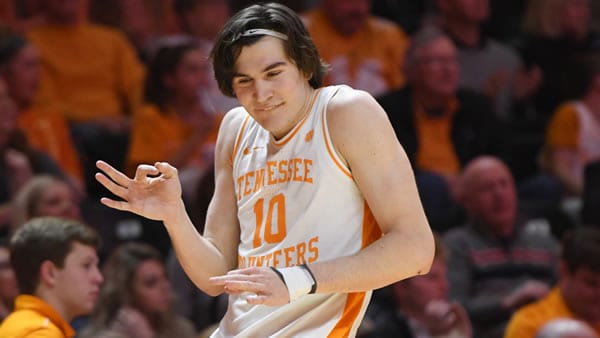 Point Spread: ARK +8/TEN -8 (Get reduced juice basketball betting >>> Lay -105 on games instead of -110! This will save you hundreds of dollars per year with 5 minutes of effort!)

The bloom is off the rose for a pair of former unbeatens, as Arkansas and Tennessee both start-ed 2021 by taking a defeat for the first time this season. Truth be told, both were quite the sur-prise, as both lost in a way that really wasn’t expected for the way these teams like to play. Ar-kansas was a defense-first squad in year one under Eric Musselman but has rebuilt itself into an offense-heavy squad this season. However, the Razorbacks never got going against Missouri, scoring a season-low 68 points against the Tigers.

While the Razorbacks were failing to hit their shots, the Volunteers were watching their nor-mally sturdy defense fail to stop Alabama. Tennessee hadn’t allowed a team to score 70 all sea-son, but Alabama got 71 and left Knoxville with a big win over the team most expect to win the SEC. Rick Barnes has always been the kind of coach who values tough defense, and the Volun-teers just didn’t get it done against the Crimson Tide. Which team gets back to the way it likes to play here?

If you watched Arkansas play a season ago, you might have expected the Razorbacks to be a defense-heavy squad that rarely gave up points to its foes. You’d have been right a year ago, but this Arkansas squad much prefers to race up and down the court and try to bury its oppo-nents in points.

The reason it normally works is because the Razorbacks usually shoot well and get several big rebounds. They didn’t do either one when they met Missouri, shooting a putrid 26.8 percent against the Tigers and getting pounded on the glass. Long rebounds are what helps fuel the Ar-kansas offense, but the rebounds weren’t going anywhere against the Tigers, as Arkansas ended up with eight rebounds fewer than its season average. To make this work, Arkansas really needs Desi Sills and Connor Vanover to shoot better than they did in their most recent game. A combined 1-for-21 from the floor simply isn’t going to get the job done.

It’s a common tactic for good defensive teams to encourage their opponent to take the 3-pointers and hope that they’ll miss a few, allowing the opponent to essentially hang themselves. Legendary North Carolina coach Dean Smith did this many times, and Rick Barnes followed the same strategy against Alabama. Unfortunately for the Volunteers, it backfired in a big way be-cause the Tide hit half of their shots from the arc, and Tennessee wasn’t hitting much of any-thing at all.

The Volunteers’ big strength of depth can also be their biggest weakness: Tennessee really doesn’t have one guy that it can count on to always put up points. The good news for the Vols is that with seven guys who can score, led by Victor Bailey’s 13 points a game, it’s pretty unlikely that all seven guys will have a rough night. On the other hand, when someone needs to step up and carry the day, there’s really not any one player that the Volunteers can count on to turn things around. It usually doesn’t matter because of how well Tennessee plays defense, but if a team can beat the Vols’ defense, it makes a world of difference.

Resiliency. These teams have run into adversity for the first time this season. In this part of the season, it’s relatively easy for a team to find itself getting beat repeatedly if they don’t show the resiliency needed to compete in a power conference. Arkansas’ mentality could be a little fragile given that Eric Musselman is still trying to build his program, as opposed to Rick Barnes having his program mostly well set up to handle adversity. Tennessee’s experience in this situation could prove to be critical as both teams try to get themselves back on track.

The Razorbacks can actually find space against the Tennessee defense and hit their shots. The Razorbacks are at their best when they’re moving the ball well and hitting good looks at the basket, and that’s a difficult thing to do against Tennessee’s aggressive defense. To make the game plan work, Arkansas has to rebound better than it did against Missouri.

The Volunteers get out on the Razorbacks and force them into difficult shots. Arkansas isn’t likely to opt to take the invitation Alabama did, as the Razorbacks need to build their confidence back up after failing to hit much of anything against Missouri. Arkansas needs to get inside for easy baskets, and Tennessee has to cut those off.

Tennessee’s the team that’s much further along in its attempts to contend for an SEC title, and Tennessee’s the team that should bounce back the quickest after what happened last weekend. Arkansas is still very much in the process of finding itself, while Tennessee already knows who it is as a team and what it needs to do to win games. Give me the Volunteers to handle the eight-point spread and win the cover. Bet your NFL playoff picks FREE by taking advantage of a 100% bonus on your first depositof $100 to $300 at MyBookie Sportsbook! (Must use bonus code PREDICT100).