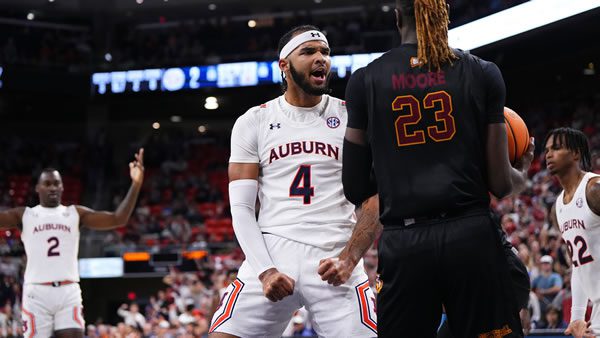 Point Spread: AUBRN -4.5/ WASH +4.5 (Bet your games at -105 odds instead of -110! Find this awesome money saving offer that will save you THOUSANDS (and it costs you nothing!) at BAS Sportsbook!)

The oddsmaker has listed the
Tigers as a -4.5 road favorite when they travel to Seattle to take on the Huskies at Alaska
Airlines Arena at Hec Edmundson Pavilion. Auburn has cooled off since winning their eight games,
losing two of their last three. The total line opened as low as -138 and has been on the rise at
most betting sites hitting as high as 139.5 at the time of writing.

Going into their last game, Auburn was the betting favorite at -1 but fell to USC by a score
of 74-71. The combined 145 points finished above the 137.5 total line.

Washington picked up a victory over Idaho State by a score of 90-55. Heading into the game,
the Huskies were favored to win, with a point spread of -15. The combined 145 points finished
above the 133.5 total line.

Over their last five games, Auburn has a straight-up record of 3-2 while going 1-4 vs. the
spread. Over this stretch, the Tigers’ offense is averaging 74.8 points per game while hitting
46.4% of their shots from the field. On the defensive end of the floor, they have allowed
opponents to shoot 43.3% from the field while allowing 69.2 points per contest.

In their previous five contests, Washington is 3-2 straight-up and 2-3 vs. the spread. In these
five games, they have a scoring average of 72.4 points per game on a shooting percentage of
46.2%. Defensively, they allow teams to hit 43.6% of their shots while giving up 65.8 points per
game.

This season, the combined power rating of Auburn’s opponents comes in at 74.7. On the other
side, Washington’s combined opponent power rating sits at 74.

How Does Auburn Fare On The Road?

For the season, the Tigers have played four road games and have a record of 2-2. In these
contests, Auburn is 1-3 vs. the spread. Offensively, they have averaged 68.0 points per game on a
shooting percentage of 41.8%. On defense, the Tigers are allowing 65.5 points per contest when
playing away from home. So far, opposing teams have a field goal percentage of 41.0% in these
games.

How Does Washington Fare At Home?

In their nine games at home, Washington has a 4-5 record vs. the spread while going 8-1
straight-up. On offense, the Huskies are shooting 46.7% on their home floor, leading to 73.6
points per game. Defensively, opponents are shooting 39.3% in these contests. The Washington
defense is allowing 63.1 points per game at home.

For the season, Auburn is averaging 78.7 points per game (29th) while posting an overall field
goal percentage of 44.0%. In today’s game, they will be matched up against a Washington defense
that has allowed an average of 64.6 points per contest. This year, opponents have hit 40.7% of
their shots vs. Washington. On the other side, the Washington Huskies are coming into the game
averaging 68.5 points per game on a shooting percentage of 42.2%. The Huskies will be facing a
defensive unit allowing an average of 62.2 points per contest. So far, teams have hit 38.9% of
their shots vs. the Tigers.

From beyond the arc, Auburn has a shooting percentage of 32.0% while ranking 172nd in attempts
per game. The Tigers will be facing a Washington defense that has a 3-point field goal shooting
percentage allowed of 27.2%. Washington enters the game, having hit 30.3% of their looks from
deep while averaging 6.36 made 3’s per game. On the other end, Auburn has allowed opponents to
hit 27.1% of their shots from beyond the arc.

Auburn certainly didn’t look outclassed in their two losses
losing by three to USC and by nine to Memphis in a game that their rust from not playing in seven
days may have been a big factor. Tonight’s opponent isn’t in the same class as the two teams
above, making the -4.5 line decent value. I also like the total here. Take Auburn -4.5 and Over 138.5. Bet your college basketball picks for FREE this week by scoring a 50% real cash bonus up to $250 in free wagers at the best bookie on the web! —> Bovada Sportsbook! They pay fast, offer TONS of props and have the BEST live betting platform on the planet!