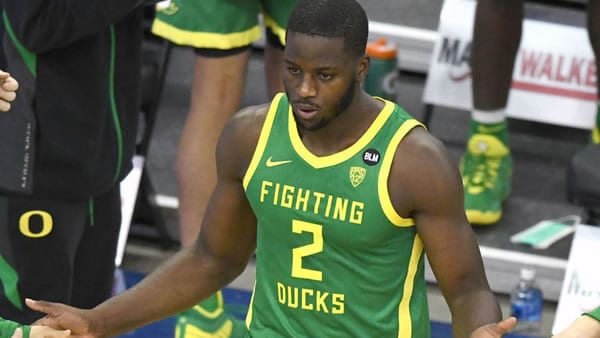 If you’re so inclined, it’s the final chance to make money in 2020, as this game should end around the same time that the year does (Colorado-USC also tips off at the same time). Oregon comes into this with plenty of momentum, as the Ducks have rebounded from their season-opening loss to Missouri (which had been looking better and better until the Tigers’ pratfall against Tennessee) and reeled off six straight wins. Oregon hasn’t really been tested in that stretch other than a three-point win at Washington, so this could be a good opportunity for the Ducks to prove they haven’t just been beating up mid-majors.

Then again, California had enough trouble in Malibu with Pepperdine, losing by 12 to a Waves squad that hasn’t exactly been washing over the rest of the Pacific Coast. That Pepperdine team that beat Cal also has a 28-point loss to Cal State-Bakersfield on its resume, which begs the question as to whether Cal is even one of the five best programs in California this season. The Golden Bears have already gone to UCLA and Oregon State this year as well as Malibu, and they don’t have a win to show for it, with only the trip to Oregon State seeing Cal stay within 10 points. However, the Ducks have far more weapons than the Beavers at their disposal, so keeping it close might be a bit unlikely.

Here’s a big reason why California isn’t winning: Matt Bradley isn’t hitting his shots. You’d never know it from his point totals, as Bradley is averaging 19 points per game this season, but a look at how he gets his points reveals that he’s only scoring because he’s shooting so often. As a freshman, Bradley was hitting upwards of 40 percent from behind the arc. Now he’s down to 27 percent, and those missed shots mean disaster for the Golden Bears.

A look at the numbers suggests the theory is accurate. Bradley has missed two victories against Division I teams, and in the two wins he was a part of, he hit, nailing 60 percent of his 3-pointers or better. In the four losses, his best showing was 33 percent against UCLA, topped by his 1-for-9 in an eight-point loss to Arizona State. But Bradley is far from the only culprit. The Golden Bears jack up more 3’s than any team in the Pac-12, yet they only connect on 32.3 percent, which ranks eighth in the league. If Cal is going to have any hope of anything this year, the shot selection has to get better.

Shot selection is one thing the Ducks know how to do well. Oregon leads the Pac-12 in two-point percentage, and the Ducks tend to be patient in their offense and willing to stick to what they do well. Eugene Omoruyi and Chris Duarte are the top scorers for Oregon, and the Ducks know that both can be counted on to hit shots regularly.

But Oregon has a serious weakness: the Ducks sometimes spend too much time looking for the perfect shot and end their possession with a turnover instead of a look at the hoop. Oregon averages 15 assists a game against 14 turnovers, which says that the Ducks have problems with their ball-handling or decision-making. Given that Oregon tends to be middle-of-the-road to moderately slow in terms of tempo, it’s probably got more to do with the Ducks’ decision-making than it does them playing too fast.

New Year’s Eve. There’s a reason most games are scheduled early in the day. Most college kids really don’t want to be worried about basketball while the celebrations are going on (and to be completely fair, this game will end around 9 p.m. Pacific, so the players should have enough time to enjoy a team-wide celebration). However, it’s still a distraction that the coaches could live without. Whichever team can minimize distractions and get off to a good start will be in good shape. Conversely, a bad start here could have one team looking for the year to just end already.

The Golden Bears can actually get and hit good shots. Playing against Oregon means that you aren’t going to get a lot of good shots, to begin with, because the Ducks almost always make defense a major focus. When you’re rushing your shots, it’s going to be challenging to get anything positive to happen. California has to slow down and work for its looks.

The Ducks can play the game at a good pace and make good decisions with the ball. California is perfectly happy to play a slow-paced game, so Oregon will likely have plenty of time to make decisions without having to force anything. The key for the Ducks will be to take what’s available and not let perfect become the enemy of good.

I’m not seeing it from California here. The Bears have been pretty poor away from home, and Oregon seems to be hitting its stride at the moment. There’s little to suggest that the Bears can hang with the Ducks, and with Cal shooting as poorly as it is, I don’t expect too many problems from the Ducks here. I’ll eat the points with Oregon. Kick your New Year off right by making the switch to -105 betting odds instead of the -110 you’re currently laying! You’ll save so much money and you’ll be so glad you did! The savings are ENORMOUS! Find this beautiful offer at BetAnySports!