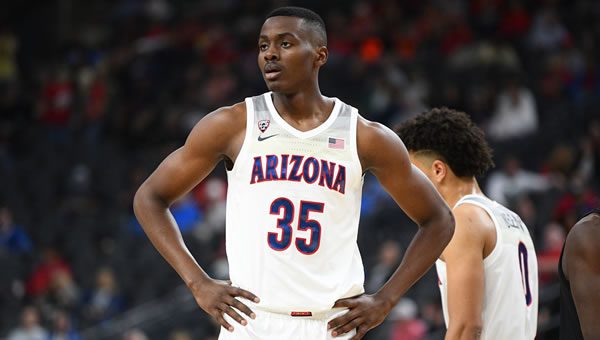 Welcome to late-night basketball behind closed doors. With COVID again raging in parts of the country, the state of California has mandated no fans in the stands for games played within its borders. So, Stanford will host Arizona in an empty Maples Pavilion. With the Cardinal undefeated at home to this point in the season, that could be a crucial advantage given away to the Wildcats.

That’s even more true in this situation, given that Arizona hasn’t played an actual road game in a month. In fact, the Wildcats have played just one road game in the Pac-12 to this point, and given that it was at Oregon State, it barely counts. With Stanford not allowed to have fans, this matchup appears to be set up perfectly for Arizona to gain some confidence and build some momentum as things get back to normal.

Any team that can bang on the boards with Kofi Cockburn and Illinois and actually expect to win the battle is a team that rebounds incredibly well, and Arizona is simply a matchup nightmare on the glass. The Wildcats lead the nation in rebounding, and it’s not entirely from shooting woes either. Arizona shoots 49.9 percent from inside the arc, so if the Wildcats get a good look inside, it’s likely either going in or going to Christian Koloko or Azuolas Tubelis on the board.
So how do you stop the Wildcats? The best way to do it is to make them beat themselves. Arizona’s turnovers get glossed over because the Wildcats move the ball around incredibly well, but they still turn it over 14 times per game. If a team is able to create some havoc and force them into mistakes, the Wildcats can be beaten. Arizona ranks second-to-last in the Pac-12 at taking care of the ball, but the Wildcats are so effective inside 20 feet that it has yet to make a difference. It’s going to take the right kind of team to knock them off.

So is Stanford, that team? Probably not. The Cardinal have a better shot than if this game were in Tucson, but their odds still aren’t very good after they managed to get beat at Washington. Stanford doesn’t have the shooters that Arizona does, and while the Cardinal hold their own on the glass, they’re not in the Wildcats’ league when it comes to the boards.

The one way they are like Arizona is the one way in which you don’t want to be like Arizona: turnovers. Remember how I said that the Wildcats are second-to-last in the Pac-12 in turnovers? You probably guessed where this is going: No. 12 is Stanford. The Cardinal turn it over on one in every four possessions, and that’s just not going to work against a team this talented. Stanford already has problems putting up numbers because of weak shooting from leading scorer Harrison Ingram; the Cardinal can’t afford to give away possessions.

Arizona will Cover If: The Wildcats shake off the Stanford jinx that has plagued them in recent years. Part of this was because Arizona’s program hasn’t exactly been at its standards in the past two seasons, and now that the Wildcats have bounced back, they should be able to take control and make a statement here. With no fans in the stands, this game should belong to Arizona.

Stanford will Cover If: The Cardinal can avoid turning the ball over and preventing themselves from even getting a look against the Wildcat defense. Arizona is almost certain to win the rebounding battle, but Stanford can help its cause if it can at least get shots off. There are no rebounds if you make all your shots…but there are no shots if you keep turning the ball over before you get to the perimeter.

Teams just can’t keep up with Arizona most nights. 81 is a high team total, but the Wildcats are averaging 88.5 points per game and have big advantages in the turnover and rebounding departments. Arizona should be able to run as much as it likes.

Playing before nobody should be a familiar experience for Arizona, and it should allow them to get comfortable at Maples pretty quick. The Cardinal just don’t have the talent that the Wildcats do, and without the crowd in the game, I can’t see Stanford hanging around. Give me Arizona. Note: In game betting is the new “thing” in sports wagering. Many sportsbooks offer the service, but most have clunky live betting platforms that take a long time to accept bets and that don’t offer good information that will increase your odds of winning. That isn’t the case at Bovada Sportsbook! These guys have put together a hugely user friendly platform that shows all the games on one page and that runs seemlessly. Check’em out! You’ll be glad you did!