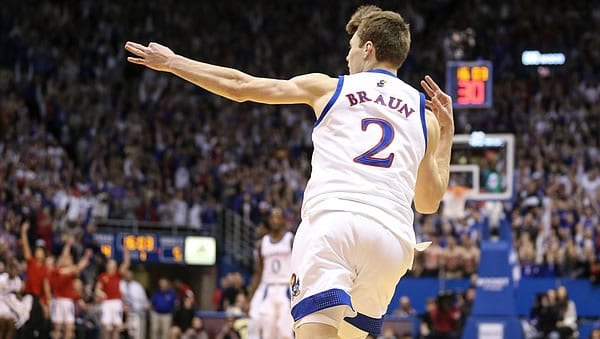 If Texas needs a strong campaign to keep Shaka Smart employed, it’s going pretty well so far. The Longhorns have done the job with defense all season long, holding six of their eight opponents under 70 points and taking care of everyone except Villanova, a perfectly reasonable loss.

But now they’ve got their toughest game of the season to date, as they’re facing a Kansas squad that seems to be hitting its stride. The Jayhawks also have one loss, and it was also a reasonable one: top-ranked Gonzaga on a neutral floor. Kansas has a little bit better offensive numbers than Texas, a little bit worse on defense, but the Jayhawks also played a more challenging schedule than the Longhorns, beating the likes of Creighton and Texas Tech so far. Plus, even without fans, Kansas is one of the toughest places in the country for visiting teams to win a game. A win here would be a major sign that Texas is for real.

If not for a strong start to the second half, Texas would have found itself on the wrong end of its Big 12 opener against Oklahoma State. The Longhorns’ defense was a mess in the first 20 minutes, but a 17-0 run in the second half was enough for Texas to pull itself ahead and hold on against the Cowboys.

That’s the good for the Longhorns, but the bad was that their shooting left a lot to be desired, and they’re just not deep enough to overcome a bad night by one of their top players. Greg Brown had a strong performance, but Matt Coleman has to shoot better than 2-for-11, especially if he’s going to play all 40 minutes. Throw in that Courtney Ramey went 0-for-6 from the field, and Texas is quite lucky that its opponent was Oklahoma State, rather than one of the top teams in a rugged Big 12. If the Longhorns try to replicate that performance, it will not end well.

When Christian Braun is able to shoot as well as he did against West Virginia, good luck trying to hang with the Jayhawks. The Mountaineers were able to do it for a half, but then Kansas hit the gas and left West Virginia in the dust, scoring a relatively comfortable victory against a good team.

The real question is, can Kansas keep up the shooting? The Jayhawks finally got Marcus Garrett going in the win over West Virginia, but hitting 43 percent from the arc really isn’t going to happen on most nights. Nor is a team likely to get as many good looks from beyond the arc as Kansas got. This game is expected to be more about David McCormack getting inside and getting good shots, as Kansas almost certainly won’t be allowed to fire at will a second time after Texas saw what the Jayhawks could do.

That would likely be just fine with the Jayhawks, as they won the rebounding battle against a good West Virginia team. If Kansas can force Brown to focus on the boards, it should allow the Jayhawks to do the job on defense against Texas’ attack.

Texas on the road. Maybe it won’t be a big deal this year with few fans in Allen Fieldhouse, but this will be the first true road game that Texas has played all season (North Carolina in Asheville doesn’t count). The Longhorns haven’t really faced a hostile crowd all season, and if things start to go badly at the start of the game, as happened against Oklahoma State, it could be tough for Texas to climb back into the contest.

The Longhorns can stop the assault from the arc. Kansas can’t be allowed to hit 16 3-pointers if Texas is going to come close to covering, especially at the pace the Longhorns like to play. If Texas locks down early, this will be a tight battle from start to finish. If Kansas gets free and starts hitting, this will be one-way traffic.

The Jayhawks can win the rebounding battle again. Kansas’ effort against West Virginia showed that it can be monstrous on the boards when it wants to be, and if the Jayhawks are pulling down rebounds and cashing in on second-chance points, it’s hard to see how Texas can stick close in this one.

The Longhorns really haven’t proven themselves yet, especially compared to what the Jayhawks have done all season. I think Texas is a good team, but it’s coming into Lawrence and didn’t look great against an average Oklahoma State squad. As long as Kansas is hitting here and there from outside, the Jayhawks should be in control here. Give me Kansas. Bet your college basketball picks FREE this week by taking advantage of a 50% REAL CASH bonus up to $250 at one of the web’s best betting sites, where you receive a rebate on ALL your bets; win, lose or draw, where your credit card WILL work for deposits and where they offer FAST hassle-free payouts! —> Bovada Sportsbook!