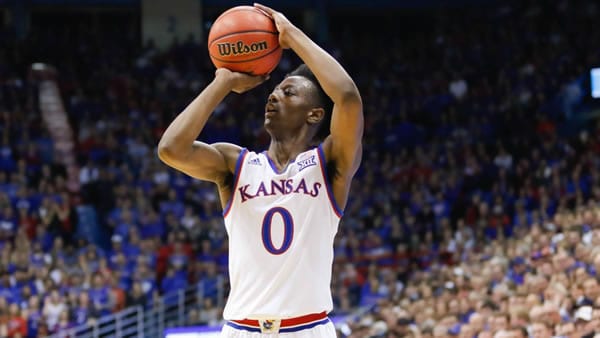 Two of the top programs in the Midwest tangle in a matchup of teams who have yet to justify their ranking for 2020. Creighton has done nothing but beat the teams in front of it, but the Bluejays really haven’t played anyone decent except for North Dakota State, which looks like a threat to win its league. Creighton’s offense has been as efficient as it gets, but among the top 30 programs in the nation, only Iowa has played a softer schedule to date.

Nobody could accuse Kansas of ducking anyone, but there are now some real questions about how good the Jayhawks are after their best win of the season lost a lot of its luster. Kansas has a win over Kentucky to its name, but that doesn’t look like much after the Wildcats’ pratfall at Georgia Tech on Sunday. Other than that, Kansas’ profile is nothing but a loss to Gonzaga and a narrow escape against North Dakota State. It’s clear that something’s missing for this Jayhawks squad right now, and this is where they need to re-establish themselves.

There are two things you need to know about Creighton: anyone coach Greg McDermott puts on the floor can score, and the Bluejays will not beat themselves. That was how Creighton won by double digits against the same North Dakota State team that had Kansas on the ropes: the Bluejays only turned it over seven times in 40 minutes. It’s admittedly been a short season, but Creighton nearly has a 3-to-1 assist to turnover ratio to its name.

The problem for Creighton is that it’s a real question as to how this team will react if it finds itself in a tight spot. To this point, Creighton hasn’t had anyone establish itself as a scoring leader, with none of its six top scorers averaging more than 15 points a game or less than 10. Christian Bishop appears the closest to being a top scorer, but because Creighton has never really been threatened in 2020, McDermott hasn’t had to play him for more than 20 minutes. Having six players who can both score and rebound is an asset when you’re ahead, but if you fall behind, it can become a liability without a leader on the floor — especially with a team that doesn’t really shoot the ball all that well.

Marcus Garrett’s got to be better than what he showed against North Dakota State. Shooting 2-for-9 simply isn’t going to get it done, and if the Jayhawks hadn’t grabbed 16 offensive rebounds, they might very well have lost to the Bison. That’s an advantage that will still be there in this game, as Creighton is an even worse rebounding team than North Dakota State (the Bison actually outrebounded the Bluejays by 14 in their meeting), but Kansas needs more from its biggest star.

Ochai Agbaji has done an admirable job stepping up in the early going this season, but Garrett spends more time on the court than anyone else in a Jayhawk uniform. If he’s not at his best, it’s going to be hard for Kansas to be a special team. Garrett hasn’t been bad by any means; he simply hasn’t been up to his high standards in the early going. If he does get back to his usual production, that combined with Kansas’ rebounding makes the Jayhawks very dangerous.

Behind closed doors. It’s clear that Kansas has not yet learned how to create its own energy in Allen Fieldhouse. The venerable building is normally a 10 to a 15-point advantage for Kansas because of the energy inside, but with fans not allowed in, Kansas has to create its own excitement. So far, that’s proving difficult for this squad, as North Dakota State led for most of the second half before the Jayhawks came up with a late flurry to avoid disaster.

On the other side, Creighton will face a true road game for the first time this season, but the Bluejays don’t have to worry about a hostile reception. With no fans to worry about, there’s a good chance that Creighton can take time to get settled in and make its adjustments without getting buried in the early going.

Creighton will Cover if:

The Bluejays can wear the Jayhawks down and force them into mistakes. Kansas is nowhere near as deep as Creighton, and with eight reliable scoring options, it doesn’t really matter who McDermott puts on the court. As long as Creighton doesn’t give up too many second chances, the Bluejays have enough bodies that they can take control of the game in the final 10 minutes and take advantage of Kansas running out of gas.

The Jayhawks either hit their shots or extend their possessions. Kansas has the ability to pound away at Creighton down low, and if they’re limiting the Bluejays to one shot at their own end while getting three or four cracks at it on offense, they’ll both frustrate Creighton and keep the score down. Kansas’ ideal game sees both teams in the 60s, and the way that happens is if the Jayhawks can keep the ball in their hands.

It’s tough to trust a team that hasn’t yet played anyone of consequence, as Creighton really hasn’t tested itself against anybody. That said, something’s off right now with the Jayhawks, as they don’t seem to be on the same page, and they’re not getting quality production out of Garrett.

With no fans in Allen Fieldhouse, I think Creighton can cover here. I might look to live-bet this game, but for the opening, I’ll go with the Bluejays and the points. Bet your Bluejays/Jayhawks pick and ALL your basketball bets at -105 reduced odds (instead of -110) at BetAnySports! Wagering on hoops at -105 will save you HUGE money over the course of the season!