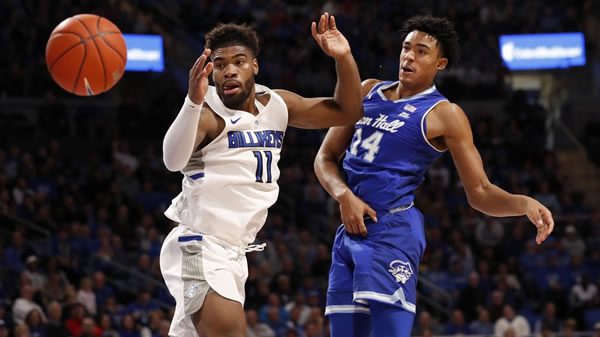 These two teams are getting desperate, as neither team really has anything all that impressive on the profile. Seton Hall looked like it was a good bet to get a high seed this season when it handled Michigan and Texas, but those wins have looked a lot less impressive as the year has progressed. In Big East play, the Pirates have simply taken close loss after close loss against good teams, having lost to Marquette twice, Villanova and Providence. They’ve also taken losses to DePaul and St. John’s, which has really given the Pirates’ resume a shove in the wrong direction.

Creighton does have a few big wins to its name over Villanova, BYU, and Marquette, but the Blue Jays have not looked right since that win in Milwaukee over Marquette. Creighton is just 3-4 since that game and has played itself right off the bubble with a couple of ugly losses. There’s still time for both teams to play their way back into the tournament, but there’s not a lot left, and this is an opportunity that neither team can afford to waste.

To steal a line from Chef Matthew Grunwald, hello corner that the Bluejays backed themselves into. Creighton had a chance to pick up an outstanding Quad 1 win over Xavier if it could have held a 17-point halftime lead, but the Jays blew it and lost by double digits to the Musketeers. That followed up a loss at Butler in which the Jays weren’t even competitive, meaning Creighton blew one opportunity and took a catastrophic loss, putting their profile in a flux.

Even the win at Connecticut isn’t really that encouraging because that was only because Connecticut shot just 30 percent from the floor and nearly overcame the deficit in the second half. This is a team that just cannot close out games, as they turn the ball over almost 15 times a game and don’t have much in the way of depth. Ryan Hawkins, Ryan Nembhard, and Alex O’Connell all average more than 30 minutes per game, as Creighton simply does not trust its bench. That usually makes fading the Bluejays a great second-half bet.

It’s a good thing the Pirates are good rebounders because they certainly aren’t good at shooting the ball. Seton Hall rates 271st in the nation in field goal percentage and doesn’t do all that well from behind the arc either. The Pirates do a good job of getting to the foul line and cashing in when they do, and they do extend possessions when they miss their shots.

But the Pirates just don’t get enough good looks at the hoop, which means Seton Hall has to win with defense and sheer quantity of attempts. Seton Hall does hold opponents to 40 percent shooting from the field, making it pretty unsurprising that they’ve been an under team in 12 out of 19 games this year.

Creighton will Cover If: The Bluejays can avoid turnovers. Seton Hall is guard-heavy and forces about 7.4 steals per game, not exactly a recipe for success for the Bluejays when they average 15 turnovers per game. If the Jays hand the Pirates easy baskets, it’s hard to see them getting a win here.

Seton Hall will Cover If: The Pirates can turn their rebounding edge into points. With how bad the Bluejays are from behind the arc, there’s likely to be a very large amount of rebounds in this contest. Seton Hall has to make sure that its size and rebounding ability limits the Bluejays to one shot per trip and convert its chances at the offensive end.

Backing the Pirates to win the second half is a great idea in this situation. Creighton is very much a first-half team and tends to get an early lead before failing to close out the game properly. If the game is close at the half, you’re likely to get a good price on the Pirates.

Seton Hall has been the stronger team and needs to have this game if it’s going to make a run at the NCAA tournament. With how Creighton fell apart against Butler and Xavier, I don’t trust the Bluejays to get this game. Give me the Pirates. Note: The Super Bowl is near! It’s a great time to explore boosting your bankroll for the big game to double your bet or bet on a bunch of props! You can do this for free by taking advantage of a 100% bonus at one of our top sportsbooks!