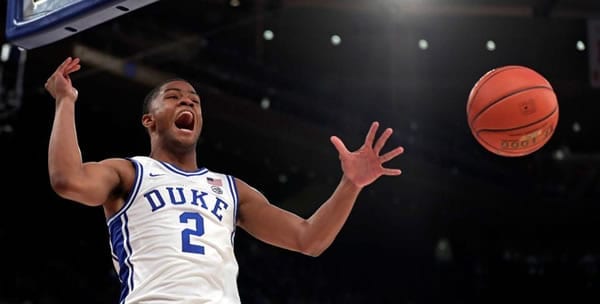 At this rate, Duke might run away with the ACC’s No. 1 seed (remember, no regular-season title to win in the ACC), as the Blue Devils are simply pulverizing one league foe after another and the league as a whole looks down outside of Louisville and Florida State. Things were bad enough for the Blue Devils’ opponents when Duke was getting most of its scoring from Matthew Hurt and Vernon Carey, but they combined for just 13 points against Wake Forest, and the Blue Devils still blasted the Demon Deacons.

This Duke team is showing signs of being just that, an actual team. Last year, Duke was Zion Williamson, R.J. Barrett, and Cam Reddish — and nothing else. This Duke team actually plays pretty well as a unit and plays like one at both ends of the floor. In a year that hasn’t seen any dominant teams, Duke might be heading in that direction this season.

Get all of our experts’ NFL Conference Picks Against the Spread as they come off the press!

It’s finally over. After 69 years and 59 frustrating visits to Chapel Hill, Clemson finally won a game at North Carolina, beating the Tar Heels in overtime. Now the Tigers turn their attention toward Duke, an opponent who they’ve actually given some trouble in recent years. In fact, the Blue Devils and the Tigers have split the past six games at Littlejohn, a marked departure from 1997-2008, which saw the Blue Devils win 22 in a row against Clemson.

To get another win against Duke, Clemson will have to get the kind of performance out of Aamir Simms that he showed in the final minutes of regulation in Chapel Hill when he scored the Tigers’ final nine points to bring Clemson back and force overtime. If Simms doesn’t have a great game, there’s not much behind him. Clemson’s roster is incredibly thin, as the Tigers only used six players for more than 15 minutes against North Carolina and gave 206 out of a possible 225 minutes to those six guys. Clemson has got to find a way to slow this game down because it does not have the depth to play with Duke.

Clemson football. This could potentially be the easiest crowd the Blue Devils face all season because of the football game in New Orleans the night before. First, most of the biggest Tiger backers are going to be in Louisiana for the national title game and aren’t going to head back to Clemson in time for a Tuesday evening basketball game, even if it is against Duke. Second, regardless of the result, the few Clemson fans who do make it to Littlejohn aren’t likely going to have their minds on basketball. If Clemson wins (game ended after this piece was submitted), the Tiger faithful are still going to be partying, and if the football Tigers lose, the Clemson campus is always going to be in mourning by 7 p.m. Either way, the Clemson crowd is not likely to make things difficult for Duke, and that could lead to a rout, given that Clemson is usually one of the more underrated places to play in the ACC.

The Blue Devils can keep up the lockdown defense that they’ve shown since the trip to Michigan State. In that game, the Blue Devils won a scoring contest with the Spartans as they’d done for most of the season, but since that contest, Duke has stepped it up on the defensive side of the ball. Its past seven opponents have failed to hit 65 points, and Georgia Tech was the only one of the past six to keep the margin within 25 points. That’s in large part because Duke has gotten established on defense, which has been the trademark of Mike Krzyzewski’s best teams.

Clemson will Cover if:

The Tigers can forget about North Carolina and get themselves psyched to play Duke. Clemson has had to hear about 0-59 for the better part of seven decades, and now that that mountain is scaled, will the Tigers be ready to go so soon after exorcising the Carolina demon? It’s not going to be an easy task, but the reality is that the Carolina squad the Tigers just beat really isn’t all that good, and Duke has already played one team from South Carolina that won in Chapel Hill (Wofford) and waxed them easily. The Tigers have to be mentally prepared to have any hope.

I don’t expect Clemson to be ready to play this game. Duke is playing better than anyone in the country right now, the Blue Devils have won five of their past six by 25 or more points, and the Tigers are probably still going to have their minds on Carolina by the time this game tips off. On top of that, despite their historic win, this is still a Clemson team that lost by nine at home to Yale, and while the Bulldogs appear to be the class of the Ivy League by quite a bit, any team that can lose by nine to Yale is perfectly capable of losing by 12 or more on the same floor to Duke.

I don’t think the Tigers have the offense to stay with Duke, and if you break down the total and the spread, that works out to be a projection of about 61 points for Clemson. Given how well Duke’s defense is playing and that the Tigers scored 45 against Yale, 53 against Florida State, 54 against South Carolina, 60 against Virginia Tech and needed overtime to break 62 against Miami (which is definitely not known for its defense), I don’t really think Clemson threatens that number. I like the Blue Devils to cover, and I think Clemson goes under its team total. Give me Duke across the board. Where are you wagering on college basketball this season? Does your bookie give you -105 odds? NO he doesn’t! Ditch his overpriced act TODAY and start saving huge money by betting at -105 odds! It’s the only way to play! Find this huge $$$ saving offer at the web’s best sportsbook –> 5Dimes!