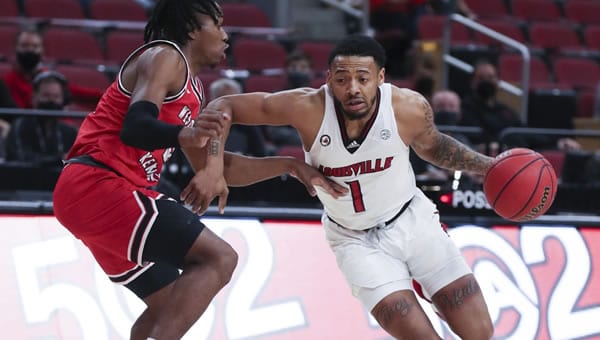 So it’s come to this: a game where Duke isn’t favored by the books. Assuming there’s not a major swing toward the Blue Devils, this marks the first game since Dec. 3, 2019, that Duke will actually be getting points, ending a 31-game streak of the Blue Devils as favorites.

Truth be told, it’s only because Duke’s ACC schedule has been so pathetically weak that it’s taken this long for the Blue Devils to be underdogs. Duke’s three wins in the ACC (Notre Dame, Boston College, and Wake Forest) have come against teams that are a combined 2-17 in the conference, and the only team with a winning record that the Blue Devils have defeated this season is Bellarmine, which wasn’t even a Division I school last year.

Five miles up the road from Bellarmine, Louisville is trying to keep a promising season from snowballing in the wrong direction. The Cardinals were off to an outstanding 9-1 start before reality hit in the form of Miami and Florida State, which dealt Louisville a pair of defeats to send it into this matchup in need of some confidence. Duke could be the right opponent at the right time for Louisville: the Cardinals beat the Blue Devils in Durham last year and have covered three straight against Duke in the Yum Center.

A look at the box score from Duke’s most recent game against Pittsburgh reveals one thing: the Blue Devils just aren’t a very good basketball team this season. By all accounts, the numbers say that Duke should have routed the Panthers, as the Blue Devils took 18 more shots than the Panthers, won the rebounding battle, and committed fewer turnovers.

Where did they go wrong? Bad shooting and weak defense. The Blue Devils might have taken 18 more shots than Pittsburgh, but they hit just three more shots. Worse, Duke kept sending Pittsburgh to the free-throw line, as the Panthers hit more free throws (24) than the Blue Devils even attempted (19).

A winning formula for this Duke team includes a strong performance from Jalen Johnson and good shooting from at least one of Duke’s guards, but the Blue Devils only got half of the equation in their most recent game. Johnson did his part with 24 points, but Jeremy Roach was 0-for-7 from behind the arc, and Johnson ended up on the bench with five fouls. Neither of those can replicate if the Blue Devils are to bounce back.

The main thing that Louisville cannot do is come out as slow as it did against Florida State. The Cardinals lost the game to the Seminoles in the first eight minutes, as Florida State buried Louisville with a 22-7 run to open the game and never let the Cardinals get within 10. Truth be told, the slow start was simply devastating to the Cardinals because they’re not a deep team by any stretch of the imagination.

The Cardinals only go seven deep, and the most important of those seven is Carlik Jones, who hasn’t gone up against Duke before. The main worry for Louisville is that Jones’ deep shots haven’t been falling all that well as of late, as he’s sunk just four of his past 16 shots from beyond the arc. But on the other side of the coin, Jones has been solid at the free-throw line, and with Duke proving rather foul prone, Jones might have a real chance to score half of his points from the stripe. Regardless of what Jones does, the main thing the Cardinals can’t do is allow 78 points again, which they’ve done in their past two contests.

Momentum. Both of these teams badly need to get things going in the right direction, and momentum has really been in short supply, with both coming off a pair of losses. In particular, another slow start for Louisville could prove absolutely devastating given that the Cardinals just saw things disintegrate on their home floor against Florida State. The first 10 minutes of this game will be critical to both teams.

The Blue Devils can get Johnson any kind of help. Matthew Hurt has been the Blue Devils’ top scorer on the season, but he scored just 13 points against Pittsburgh. Thanks to Johnson’s injury, he and Hurt have never produced in the same game this season, a big reason why Duke is struggling as badly as it is. Getting a big game from both will be critical.

Louisville will Cover If:

The Cardinals can get Johnson or one of his teammates on the bench. Louisville’s best plan to stop Johnson is to have him foul and get himself out of the game. All five Cardinals starters shoot 70 percent or better from the stripe, so if the Blue Devils give Louisville the same opportunity that they gave Pittsburgh, this could get out of hand.

My main bet here is the over, given that both teams are struggling to play defense right now. As for the spread, my trust in Duke is absolute zero. The Blue Devils don’t look like a real team, and that’s in part because they’ve had no time or ability to jell properly. The one and done model just doesn’t work in a pandemic, and I can’t see myself trusting Duke again this season unless things change quickly.

Until Duke shows it can beat a better squad than Bellarmine, I’m staying far away. Give me Louisville.