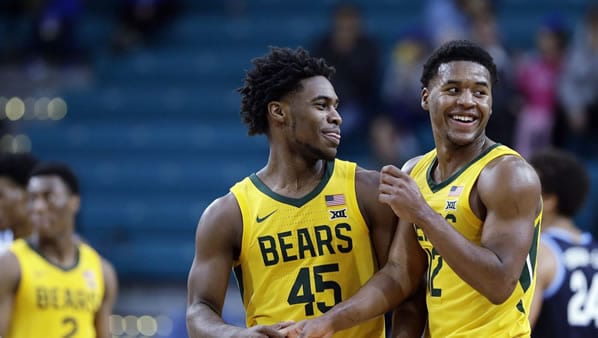 After defeating one old Southwest Conference rival to get to the Elite Eight, Baylor now faces another in Houston, presenting what could evolve into a major defensive struggle. Houston’s defensive success is well known, as the Cougars allow just 55.8 points a game and have shown no problems with winning ugly all year long. Houston does have an efficient offense at its dis-posal, but the Cougars often take so long to get a shot that their scores often end up in the 70s or less.

Baylor can play defense very well, but the Bears’ offense is so outstanding that the Bears rarely find themselves held under 70 points. It’s only happened four times all season, and one of them gets an asterisk because the Bears were coming off a COVID pause when Kansas held them to 58 points. However, don’t misread that as good news for Houston: the Bears have already prov-en that they can play at a slow pace just last week, as they handled Villanova’s slowdown game and emerged with an 11-point victory. In fact, Baylor has been winning with defense more than offense as of late, as only Arkansas has managed more than 63 points on them in this tourna-ment. At the same time, that’s more than anyone has scored against Houston in Indianapolis. Which defense gives in this matchup?

Houston’s got one big Achilles’ heel: it really struggles to step on the throat of its opponents when it plays someone that’s close to its own level. The Cougars tend to play a lot of lesser op-ponents in the American Athletic Conference, and when they play someone who’s not on their level, such as Cleveland State in the first round, they have no problem finishing the job and earning an easy cover.

But against teams who can actually play with them, such as Rutgers, Memphis, and Oregon State, Houston has had a tendency to play tight games. Against the Beavers, Houston had Ore-gon State dead to rights in the first half, only to watch the Beavers climb back into the game and tie them in the final three minutes. The Cougars did enough to survive, but they exposed a big weakness in the process. Houston is only at its best when it’s getting great offense out of Quentin Grimes and Marcus Sasser, and when the shots stopped falling, the Cougars nearly al-lowed the comeback to happen. The problem here is that Houston has little inside presence as a guard-heavy team, and an inside presence is the main thing that you need to beat Baylor.

Baylor didn’t Baylor, and now the Bears are in the Final Four for the first time since the begin-ning of the Cold War. Baylor’s long had a reputation as a team that comes up small in the big game, but these Bears have thrown that to the side by seldom being threatened in the second half in their run to the Final Four. So far, only Hartford has managed to cover the spread against Baylor, and that was because the Bears backed off in the second half and allowed the Hawks to backdoor Baylor bettors. Otherwise, Scott Drew’s squad has closed out games expertly.

The key for the Bears will be adjusting to Houston and the way it likes to play, a jarring whiplash after facing off with Arkansas. One of the things that makes Baylor so dangerous is that it’s equally comfortable playing at a fast pace or playing a lockdown defensive game, making the Bears a true chameleon on the court. Baylor was able to play at Villanova’s pace in the regional semifinals, and the Wildcats play a lot closer to Houston’s slow tempo than the Razorbacks do. If the Bears can adjust to the differing styles of play, they’ll be in control of this one.

The Cougars can get one of Sasser or Grimes hot from the beginning of the game and keep feeding them. Davion Mitchell is almost sure to end up on one of these two, which means the other has to step up the offense and make sure that the Cougars are able to keep pace with the Bears. If Houston can’t keep up the scoring, it’s in big trouble.

The Bears can be patient and take their opportunities when they come. Houston’s defense can be beaten; it just takes the right team and mindset to get it done. The Bears have the better guards, and if they’re able to wait for their shots and make sure they count, their defense is strong enough to hold the Cougars at bay.

When Baylor plays at a slower pace, its opponents tend to slow down pretty far as well. The Bears have held three of their first four opponents to 30 or less in the first half, and given that Houston is a bit slower than Villanova, odds are good that the Cougars will come in under that total. I really like Houston to finish under 29.5 in the first 20 minutes.

Baylor is playing pressure-free now, and Houston really isn’t the kind of team that can attack the Bears’ weaknesses. The Cougars’ best way to win games is to force teams into a game that’s not to their liking, but Baylor is just fine playing a low-scoring, defense-heavy game.

The Bears are finally in the Final Four, so there’s no worry about flaming out early and coming up short. I’ll take Baylor to reach the national championship game and prove it’s the best team in the Lone Star State by covering here.