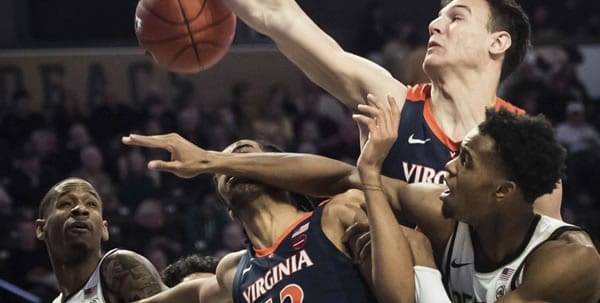 If it seems like these two just faced off, that’s because they did only 13 days ago. In that game, Florida State did just enough on the perimeter to hold off Virginia and get a 54-50 win that marked its 10th straight victory and its third straight by four points or less. Florida State hasn’t been on its game as of late, though, as it’s found itself playing its opponents’ style against Miami and Notre Dame. The Seminoles are at their best when they can slow their opponents down and win with their defense, but they gave up a combined 163 points to the Hurricanes and the Irish, neither of whom projects to make it to the quarterfinals of the ACC tournament.

In truth, Florida State really shouldn’t have come close to losing to the Irish, but the Seminoles managed to play carelessly enough to fritter away an 11-point lead over the final five minutes and give the Irish a reasonable shot to win. Had the Seminoles not hit 66.7 percent from deep against Notre Dame, they likely would have lost that game. To get a result at Virginia and sweep the series, something the Seminoles have not done since winning seven straight against Virginia between 2008 and 2012, they’ve got to get back to what they do best, and that means defending the basketball above all else.

Virginia is the Ozzie Smith of college basketball: brilliant on defense, virtually nothing on offense. Actually, that’s not entirely fair for the Hall of Fame shortstop; he did manage to hit 28 home runs in his 10,778 plate appearances in his career. Virginia isn’t the kind of team that produces much of anything on offense, as the Cavaliers play slower than anyone else in college basketball and don’t shoot it all that well to begin with. Only one Cavaliers game all season has seen both teams hit the 60-point mark, and Virginia hasn’t broken 65 points all year. When points do come, Mamadi Diakite is usually the man responsible, as he leads the Cavaliers with 13.2 points and rebounds the ball well, which allows Virginia to extend possessions and take the air out of the ball. But other than Diakita, Braxton Key and Kihei Clark, there’s barely anything there on offense, as the Cavaliers have shot just 40 percent from the floor. Basically, if this game is anything like the past two games that Florida State has played, something has gone horribly wrong for the Cavaliers.

Turnovers. These teams are strong on defense and nothing special on offense (especially Virginia), and that usually means a high amount of turnovers. The squads combined for 34 turnovers in their first meeting, and taking care of the ball is going to be critical in deciding who’s going to win a game that will almost certainly be very low-scoring. Whichever team can control the ball and make sure that their possessions end with shots rather than mistakes will be on the front foot toward a victory.

The Seminoles can get back to playing like themselves. Florida State will be playing a game that’s more its style in this contest, and coach Leonard Hamilton has said that the way that his team won the game in Tallahassee was beautiful to him. Florida State has to put together a defense-first game that takes advantage of Virginia’s poor performances on the offensive end and emphasizes the Seminoles’ length in the interior.

BETTING OFFER FROM THE WEB’S OLDEST AND MOST TRUSTED BOOKMAKER: GET A HUGE $200 BONUS ON YOUR FIRST DEPOSIT!

The Cavaliers can force the Seminoles to the perimeter and get hands in their faces. Florida State was way too reliant on the deep ball against Notre Dame, and a similar game plan in Charlottesville will result in disaster for the Seminoles. The Cavaliers can take control of the game by coaxing the Seminoles into the deep shot and getting just enough defense on them to make sure that they start missing.

I do not love the way Florida State has played lately, but I think the Seminoles have just enough to come into Charlottesville and exit with a win. Virginia just cannot get the job done on offense, and Florida State knows how to win the close ones. The fact that the Seminoles are getting a point means that a win gets them the point spread cover, so I like my chances with Florida State here.

I’d probably stay away from the total in this one, however. It’s a pretty low number, and there’s a good chance the teams will go under, but Florida State has scored at such a high clip in its past two games that there’s reason to believe the Seminoles break 60 and ruin the under. I don’t want to chance it. I’m just going to take the Seminoles on the money line and call it a day. Where do you bet your college hoops picks? Does your sportsbook give you the option to bet at cheaper odds (-105)? NOOO he doesn’t! Does your book offer 20 point teasers, 25 team parlays, pleasers that pay huge or progressive parlays where some of your selections can lose and you still win? Not likely! Ditch your over-priced bookie TODAY and start saving big bucks and enjoying better options at the web’s best sportsbook: 5Dimes!