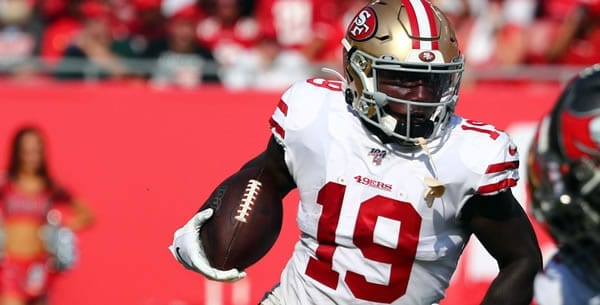 The game we have been anticipating for the last 20 weeks is upon us, with Kyle Shanahan’s San Francisco 49ers taking on Andy Reid’s Kansas City Chiefs in Super Bowl 54. These are the two best teams in the league and sets up to be a slugfest that should go down to the wire. 5Dimes has made the Chiefs 1.5 point favorites, with the play being to lay the points and ride with the Chiefs. Here is the handicap.

Patrick Mahomes Will Be The Best Player On The Field

This game shapes up to be a battle of the NFL’s two hottest offenses – the 49ers lighting up the scoreboard with the running game, while Patrick Mahomes has been carving up opposing defenses through the air. Mahomes has established himself as the league’s premier quarterback and has proven unstoppable in the past two weeks. During those two weeks, he has thrown for over 600 yards, rushed for over 100 yards, and accounted for ten touchdowns. He is distributing the ball to a stable of receivers that are the fastest in the league. Tyreek Hill’s speed makes him the most challenging match up in the league and Mahomes’ most explosive weapon. He’s only averaged 60 yards per game over the last six weeks, but the 49ers will have to stay on top of him on every play. Sammy Watkins and Mecole Hardman also bring elite speed, with Watkins going for 190 yards in the last two weeks as defenses were focused on Hill. Travis Kelce is Mahomes’ favorite target, working underneath in the middle of the field. Kelce went off for 134 yards and three touchdowns against Houston, which he could easily do again in Miami. Damien Williams returned from injuries in week 16 and has stabilized the backfield, moving the chains on the ground while giving Mahomes another reliable target to dump passes off to. This is the best offense going and is playing their best ball of the year, but the SF defense will make them earn every yard and point they get this week.

The Niner defense has shut down their two playoff opponents with relative ease. They got healthy at the end of the season and, through the first six quarters of the playoffs, only allowed ten points before allowing Green Bay 20 second-half garbage time points last week. SF has the best defensive line in the league and has speed at the second level that has shut down the Viking and Packer run games. Shutting down the run will be easy this week because the Chiefs will gladly give up the run when it doesn’t work and throw the ball. SF’s pass rush will have to dominate the game to have a chance. They have had 9 sacks over the last 2 weeks so it would not be shocking for them to harass Mahomes. However, KC’s offensive line has only allowed their QBs to be sacked 25 times on the year. In addition, Mahomes has burned both the Texans and Titans when forced out of the pocket either by creating off-script plays or running for first downs. SF’s defense also does not have the speed to contain the Chief receivers. If Mahomes is able to get out of the pocket, SF will not be able to contain Hill and the other Chief receivers – nobody can.

Shanahan’s rushing attack has been a thing of beauty in the past two weeks. SF has rushed for 471 yards the last 2 weeks and has basically been unstoppable. Raheem Mostert and Tevin Coleman have split the work, but Coleman left the NFC Championship game with a shoulder injury and may not play in Miami – and may not be effective if he does suit up. Matt Breida can step in fill Coleman’s shoes, but Shanahan trusted Breida only enough to give him one carry last week, even with Coleman missing half the game. Mostert will mostly be on his own this week, and will have to be able to log 20+ carries again, which he did not do during the regular season. We can expect that SF is not running away with this game, meaning Jimmy Garoppolo will have to make plays for the 49ers to win. Garoppolo has his moments this year, including throwing for 354 yards in New Orleans to lead SF to 48 points and a win, but he has only attempted 19 passes in the postseason. Shanahan’s play-calling makes it clear he doesn’t want the game to be on Jimmy G’s shoulders. Garoppolo has thrown 13 interceptions on the year and fumbled the ball ten times, so there is a high risk of a turnover at some point in the game. Tight End George Kittle will be the primary target for Garoppolo, and Deebo Samuel has emerged as a very dangerous option on the outside or running reverses.

KC’s defense has been a pleasant surprise. DC Steve Spagnuolo has made the Chief stop unit more diverse and more capable when playing in big games. They were 7th in the league in points allowed. They were close to the bottom of the league against the run, but elevated their game last week against Derrick Henry to shut down the Titan run game that everyone thought was unstoppable. Chris Jones should be at 100% this week which makes the entire defense better. The secondary matches up well with the 49er receivers, as long as they can contain Kittle. KC had 45 sacks on the year, and won’t let Garoppolo get comfortable in the pocket. Jimmy G only had 62 rushing yards on the season, so he is not much of a threat to run if he has to avoid a sack. I think the KC defense will do a much better job against the SF rushing attack than either Minnesota or Green Bay did. Garoppolo will have to lead 1 or 2 scoring drives late in the game, and I don’t think he will come through.

SPECIAL SUPER BOWL SPORTSBOOK BONUS: DEPOSIT $100 TO $300 AND GET A DOLLAR FOR DOLLAR MATCHING 100% REAL CASH BONUS AT  –> MYBOOKIE SPORTSBOOK (MUST USE BONUS CODE PREDICT100)

This Is KC’s Year

The Chiefs have been flying under the radar this year. Lamar Jackson and Baltimore stole all the headlines during the season, as Mahomes was battling injuries, and KC was sitting at 6-4 after week 10. But KC has silently won and covered their last eight games to garner the best ATS record in the league this year. SF is certainly a worthy opponent and deserves to represent the NFC, but they lost two of their last five games in the regular season, and have not yet been tested in the playoffs. Mahomes and the Chiefs have spotted both of their playoff opponents big leads, only to march back to convincing wins while only allowing garbage time points in the second halves of those games.

The coaching matchup is even in this game. Both coaches will put in brilliant offensive game plans, and both can make boneheaded decisions during the game. Andy Reid is outstanding when he has an extra week to prepare, with a 19-3 record straight up in games off of a bye, which this basically is. The big benefit Reid has, and the difference in this game, is that Reid will have the best QB in the league executing his game plan.

Play The Chiefs To Be Super Bowl Champs

The play in Super Bowl 54 is to lay the short spread and take the Chiefs. This game will be a shoot-out, so the team with the best shooter should come out on top. Mahomes is the best shooter in the league and should make the difference in Miami. As I have stated, I think this is a high scoring affair, so I like the over, but it has gotten bet up to a level that is hardo to play. If you want to get in on the total, I would play Chiefs team total over 27.5 points. Where are you betting on games? Does your sportsbook allow you to bet at -105 discounted odds? Does he offer 20 point teasers? 25 team parlays? Progressive parlays where some of your picks can lose and you still win? NO HE DOESN’T! Dump him and his overpriced odds TODAY and start betting smarter at 5Dimes Sportsbook!