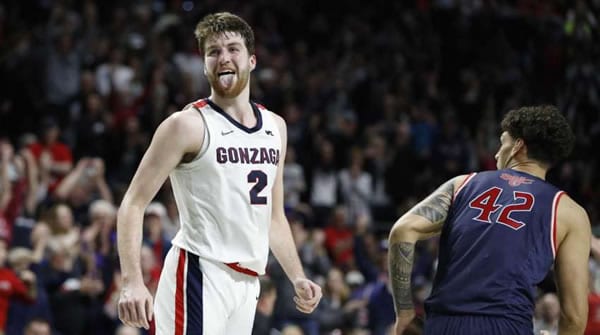 COVID might have robbed us of a 1-2 matchup between Gonzaga and Baylor, but a 1-3 matchup is a fine replacement. Plus, if you love points, this game is appointment television. These are statistically the two top offenses in college basketball, and both love to play fast and get buckets. Iowa is averaging an almost unthinkable 100.5 points per game, and Gonzaga is nearly as good at 93 points per game. Both teams can rebound, both move the ball well, both play pretty solid defense, and both have outstanding individual talent.

In short, this game has the potential to be one of the best on the calendar and could very well be a preview of the Final Four.

If the foul trouble from the West Virginia game repeats itself, Gonzaga is in big trouble. Drew Timme and Anton Watson both fouled out against the Mountaineers, and had Jalen Suggs not recovered from injury and returned to the court, we’re likely talking about a 2-1 Gonzaga squad. But the Bulldogs survived, in large part because they were able to frustrate West Virginia enough to force the Mountaineers to shoot just 38 percent from the field.

That’s both a big plus and a worrying sign for Gonzaga going into this game. On the one hand, this is an experienced team that knows how to handle adversity and won’t panic if things start going in the wrong direction. On the other, West Virginia scored 27 points from the free-throw line. Gonzaga’s defense can’t do anything about the charity stripe other than cut down on the fouling, a lesson Mark Few is sure to have hammered to his team in the two weeks since that game. If Timme and Corey Kispert have to spend any amount of time on the bench, Gonzaga is in trouble.

It was Mike Adras of Northern Arizona who used the phrase “Recruit to Shoot,” but the phrase really applies to Iowa in 2020. The Hawkeyes rank seventh in the nation in field goals attempted and get off a remarkable 69 shots per game. (To put that in perspective, Virginia, generally considered to be the slowest-paced team in the nation, only takes about 53 shots a game). What’s more, the Hawkeyes hit their shots, and even though they have Luka Garza inside, about two out of every five Iowa shots come from outside the arc.

Actually, it’s likely because they have Garza inside that the Hawkeyes feel comfortable shooting it from deep as often as they do. There’s no such thing as a bad shot for Iowa because the Hawkeyes are pretty likely to come up with the board. Only North Carolina, who emphasizes rebounding more than anyone in the country, has won a rebounding battle with Iowa, and the Heels still couldn’t stay within 13 of the Hawkeyes.

And that doesn’t even touch that Garza is averaging 29 points per game, despite averaging just 25 minutes per game because North Carolina is the only team to come within 25 points of Iowa all season. Throw in good shooters like CJ Fredrick and Joe Wieskamp, and there’s no other way to say it: the Hawkeyes are loaded.

Rust and the final five minutes. The one thing that worries me about Gonzaga is whether the Bulldogs are ready to play in a game like this after not playing since Dec. 2. That’s not exactly excellent preparation before a game like this, which is likely to feature 130 shots or more between the teams. But it’s an even worse situation considering that Iowa hasn’t lost any games to COVID and has played four games since the last time Gonzaga took the court.

On the other hand, rust could be a factor in Iowa’s second half in the final few minutes because the Hawkeyes have barely had to break a sweat in after the break. Iowa didn’t schedule weak, as it’s not the Hawkeyes’ fault that Iowa State couldn’t keep up with them. But the fact remains that Iowa hasn’t had to go hard for 40 minutes yet because North Carolina is the only Iowa opponent to still be in the game after 30 minutes. The Hawkeyes put a quick end to that with a 14-0 blitz in two minutes, after which North Carolina never again got within three possessions. If the Bulldogs are able to make the Hawkeyes work for 40 minutes, can Iowa handle it?

The Bulldogs can throw the other Iowa shooters out of rhythm. Garza will get his points, but Iowa’s other shooters can be slowed down or even stopped if the Bulldogs can defend the arc. Gonzaga isn’t going to outrebound Iowa, so the best the Bulldogs can do is force the Hawkeyes into bad looks that make it harder for Garza to get a good look at a second-chance basket. If the Bulldogs can keep everyone besides Garza from hurting them, they have the edge.

The Hawkeyes can get Timme and Kispert in foul trouble. If Timme goes to the bench, Garza will essentially be unchecked down low and able to do whatever he wants. Kispert isn’t a factor underneath, but he’s Gonzaga’s senior leader, and the Bulldogs need him on the court during a tight game. Getting either one on the bench (but especially Timme) would put Iowa in command.

The total isn’t on the board yet, but with how these offenses play, I’m going for the over as long as it doesn’t start with a 2 (and even then, I’m not ruling it out). As for the game, Gonzaga has looked great, but the win over West Virginia did give me some pause. The Bulldogs did provide a bit of a blueprint on how they might be beat, and against a player like Garza, I don’t love the idea of taking a team that’s foul-prone.

I’ll take my field goal and go with the Hawkeyes to grab the cover in South Dakota.