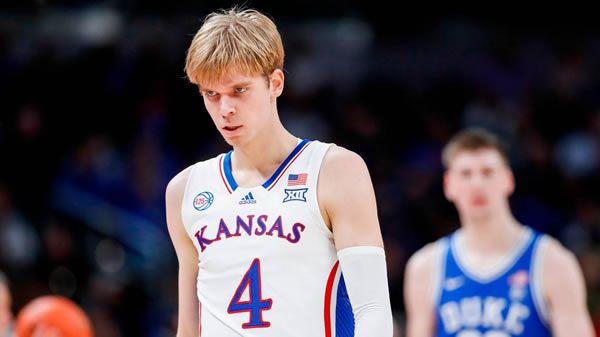 The Harvard Crimson travels to Kansas to take on the Jayhawks on Thursday night. According to the bookmakers, Kansas is unlikely
to have their home winning streak threatened, listing them as a -21.5 point home favorite. The
total line currently offered at 137.5 appears to offer more betting value.

Harvard will be looking for another win, as they most recently defeated UC Irvine by a score
of 62-57. The Crimson also picked up an ATS victory as they were +10 point underdogs. The
combined 119 points did not surpass the 133.5 total line.

Kansas picked up a victory over Indiana by a score of 84-62. Heading into the game, the
Jayhawks were favored to win, with a point spread of -5.5. The combined 146 points finished above
the 142 total line.

Harvard
Over their last five games, Harvard has a straight-up record of 3-2 while going 2-2 vs. the
spread. Over this stretch, the Crimson offense averages 66.4 points per game while hitting 40.9%
of their shots from the field. On the defensive end of the floor, they have allowed opponents to
shoot 32.2% from the field while allowing 58.2 points per contest.

Kansas
In their previous five contests, Kansas is 4-1 straight-up and 4-1 vs. the spread. In these five
games, they have a scoring average of 81.4 points per game on a shooting percentage of 50.5%.
Defensively, they are allowing teams to hit 41.4% of their shots while giving up 62.6 points per
game.

This season, the combined power rating of Harvard’s opponents comes in at 67.6. On the other
side, Kansas’ combined opponent power rating sits at 80.2.

How Does Harvard Fare On The Road?

For the season, the Crimson have played six road games and have a record of 5-1. In these
contests, Harvard is 3-2 vs. the spread. Offensively, they have averaged 70.7 points per game on
a shooting percentage of 42.8%. On defense, the Crimson have allowed 62.0 points per contest when
playing away from home. So far, opposing teams have a field goal percentage of 37.0% in these
games.

In their eight games at home, Kansas has a 3-5 record vs. the spread while going 8-0
straight-up. On offense, the Jayhawks are shooting 49.3% on their home floor, leading to 83.0
points per game. Defensively, opponents are shooting 39.4% in these contests. The Kansas defense
is allowing 65.4 points per game at home.

For the season, Harvard is averaging 71.5 points per game (185th) while posting an overall
field goal percentage of 43.2%. In today’s game, they will be matched up against a Kansas defense
that has allowed an average of 65.3 points per contest. This year, opponents have hit 39.3% of
their shots vs. Kansas. On the other side, the Kansas Jayhawks are coming into the game averaging
78.6 points per game on a shooting percentage of 48.1%. The Jayhawks will be facing a defensive
unit allowing an average of 63.1 points per contest. So far, teams have hit 36.9% of their shots
vs. the Crimson.

From beyond the arc, Harvard has a shooting percentage of 32.9% while ranking 163rd in
attempts per game. The Crimson will be facing a Kansas defense that has a 3-point field goal
shooting percentage allowed of 28.8%. Kansas enters the game having hit 35.5% of their looks from
deep while averaging 7.15 made 3’s per game. On the other end, Harvard has allowed opponents to
hit 25.7% of their shots from beyond the arc.

Harvard hasn’t played much this season, with an average power rating of opponents of just 67.6, but has done well on the defensive side of the ball. Kansas is a completely different animal than what they faced this season, but I think that the scheduling helps them out here. The Jayhawks don’t play again until New Year’s Eve, which will be their conference opener, and may not be fully focused here. The Crimson have been struggling on offense, shooting just 34.4% and 36.7% in their last two games, and correcting that against Kansas seems unlikely. Take the UNDER 138. Bet your college basketball picks for FREE this week by scoring a 50% real cash bonus up to $250 at the web’s best sportsbook —> Bovada! They also have a sweet player rewards program and the best live betting platform on the planet!